The topic of negative central bank interest rates was a key driver in the forex markets last week. Dollar ended as the strongest one against a chorus of Fed officials expressed their objection. New Zealand Dollar, on the other hand, ended as the weakest as RBNZ was clearly preparing the system for negative rates. BoE Governor Andrew Bailey didn’t have the support of colleagues like Powell. Sterling ended as second weakest on negative rates speculations too.

US-China trade and political tension was another main theme in the making. Stocks displayed sign of bearish reversal on escalations of tensions. Gold and Silver’s strong rally could also be partly, at least, attributed to risk aversion too. Gold’s strength could also somewhat reflect Dollar’s resilience. Overall, as discussed below, we should know if the risk sentiments are really in reversal pretty soon. 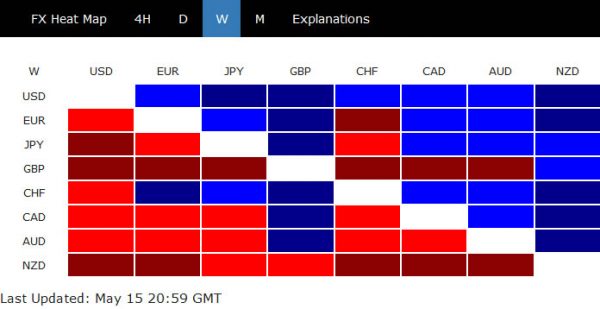 Despite persistent market speculations of negative interest rates, Fed chair Jerome Powell was rather clear with his objection. He reiterated last wee that “the committee’s view on negative rates really has not changed. This is not something that we are looking at.” “There are fans of the policy” of negative rates, he added, “for now, it’s not something we’re considering”. He emphasized “we have a good toolkit and that’s the one that we will be using.” More importantly, Powell was joined by a chorus of his colleagues, who openly dismissed negative interest rates too.

Dollar was somewhat supported by Powell’s comments last week. But there was no clear decisive buying seen. Dollar index remains bounded in range below 100.93 resistance. Overall outlook is unchanged that corrective pattern from 102.99 could still extend with another leg down. But even in that case, we’d expect strong support from 61.8% retracement of 94.65 to 102.99 at 97.83 to contain downside. Meanwhile, break of 100.93 resistance should bring retest of 102.99 high. 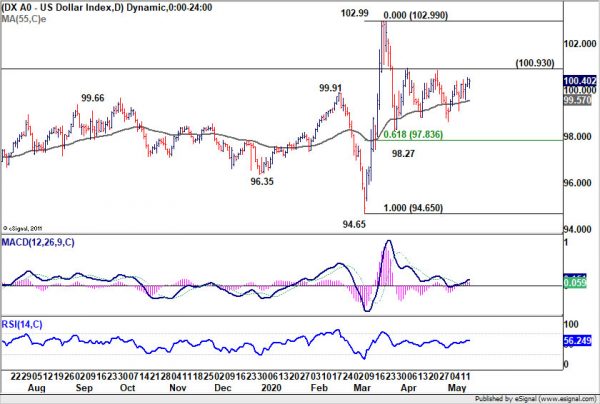 New Zealand Dollar ended as the worst performing as it’s deeply sold off after RBNZ nearly doubled the Long Term Asset Purchase program to NZD 60B. More importantly, RBNZ indicated that a negative cash rate “will become an option in future” and that “discussions with financial institutions about preparing for a negative OCR are ongoing.” The statement reaffirmed market expectations that RBNZ will eventually go negative. Some expected OCR to be cut to -0.50% as early as this November. 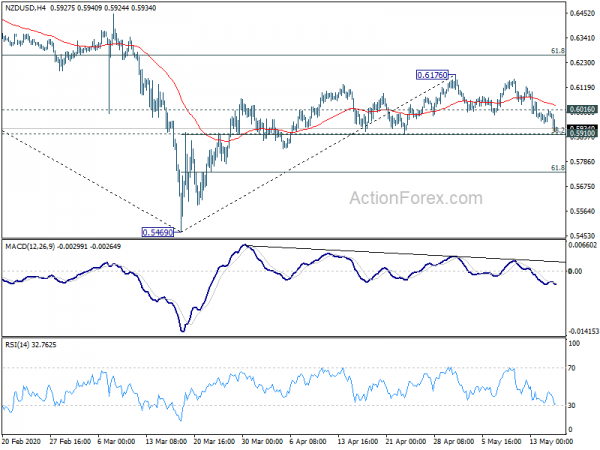 Similarly, NZD/JPY is also pressing corresponding cluster support at 63.55 (38.2% retracement of 59.49 to 56.15 at 63.60). Sustained break should confirm completion of whole rebound from 59.49. Deeper decline should be seen to 61.8% retracement at 62.03 and below. This, if happens, would be an indication of risk aversion elsewhere too. Meanwhile, rebound from the current level, followed by break of 64.59 minor resistance, will revive near term bullishness and turn bias to the upside for 66.15 resistance and above. 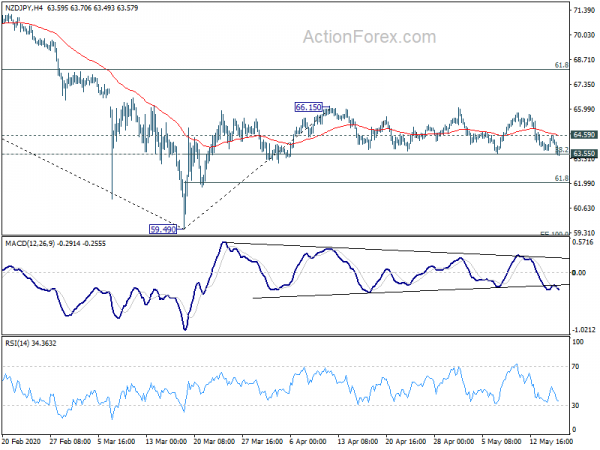 Sterling ended as the second weakest last week, also on talks on negative interest rates, plus renewed Brexit uncertainty. BoE Governor Andrew Bailey said during the week that negative rate was “not something we are currently planning for or contemplating”. But he added, “it’s always wise, and particularly in these circumstances, not to rule anything out forever.”

BoE chief economist Andrew Haldane shared a different view. Haldane told telegraph that “it’s something we’ll need to look at — are looking at — with somewhat greater immediacy.” Negative rates or not, BoE is clearing looking at more easing. Haldane noted that “with QE there is more we can do there on the gilt side and the corporate bond side in principle.”  “As we’ve found from other central banks, you could purchase assets further down the risk spectrum.” 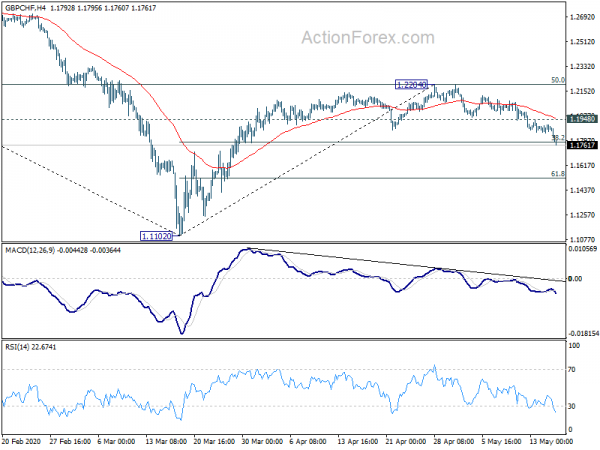 After some hesitation, GBP/JPY extended the decline from 135.74 last week. The development is in line with the view the corrective rebound from 123.94 has completed at 135.74 already. Further fall is expected as long as 131.41 minor resistance holds, to 61.8% retracement of 123.94 to 135.74 at 128.44 and below. Both developments in GBP/CHF and GBP/JPY could also be seen as early indications of risk aversion too. 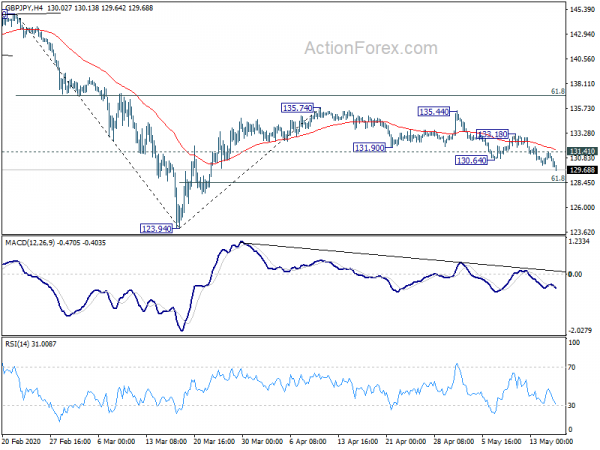 DOW and S&P 500 reversal to be confirmed soon

Talking about risk aversion, both DOW and S&P 500 completed head and shoulder top patterns last week. Towards the end of the week, both indices engaged in typical pull back recovery. Ideally, we should see rejections from the neckline resistance, as well as 55 hour EMA, in the early part of this week. Subsequent break of last week’s low should follow. Then, near term reversal should be confirmed.

However, decisive break of the neckline resistance will invalidate the reversal pattern. Recent rebound would then resume for another highs. One way or the other, we’ll know the answer pretty soon. 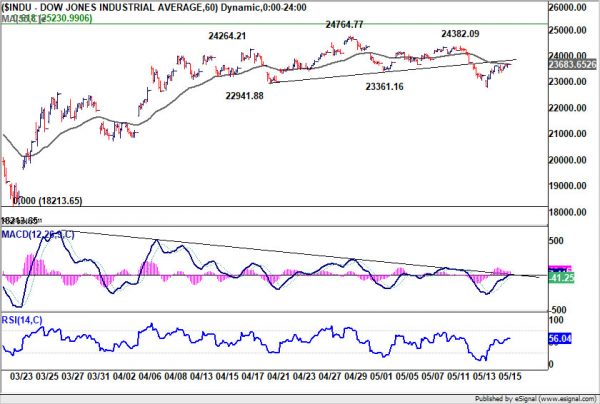 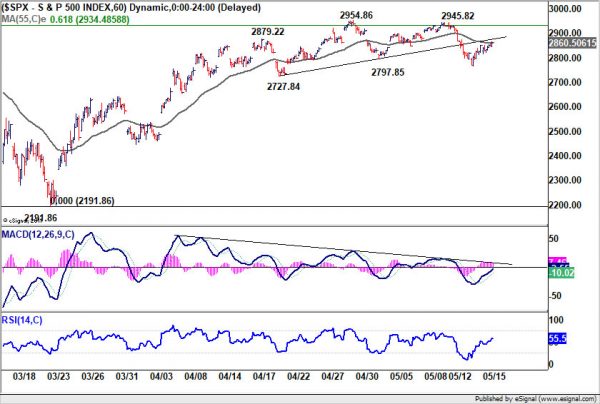 AUD/USD continued to stay in range of 0.6372/6569 last week and outlook is unchanged. Initial bias remains neutral this week first. Rebound from 0.5506 might still extend higher. But considering bearish divergence condition in 4 hour MACD, upside should be limited by 0.6670 key resistance, at least on first attempt. on the downside, break of 0.6372 should indicate confirm short term reversal and bring deeper fall to 38.2% retracement of 0.5506 to 0.6569 at 0.6163 first. 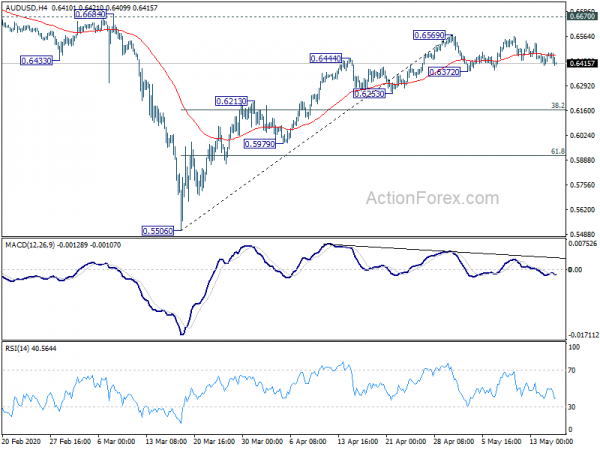 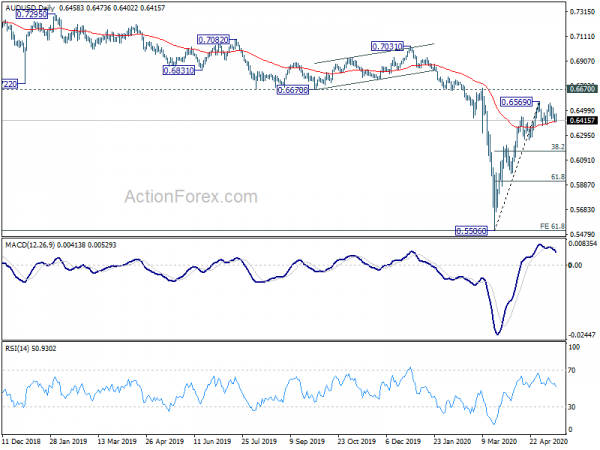 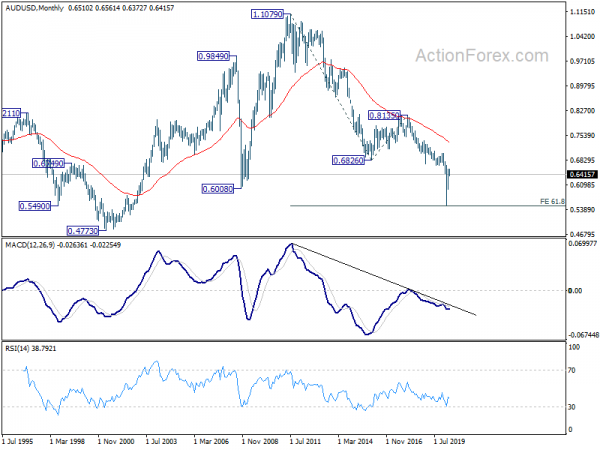 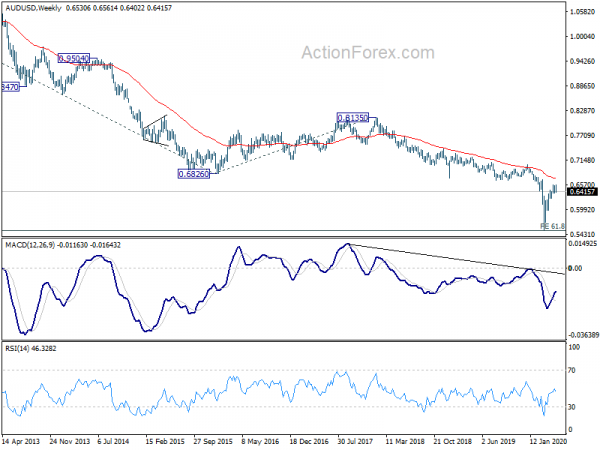