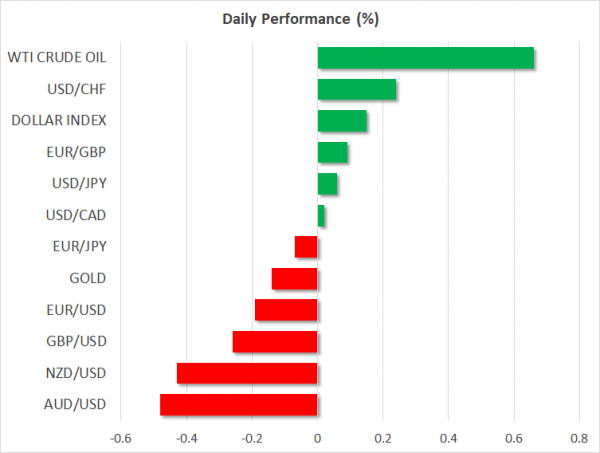 The election-related boost that the aussie received yesterday proved short-lived, with the currency giving back nearly all its gains early on Tuesday, following the release of minutes from the latest RBA meeting and some remarks by Governor Lowe. The minutes played up the prospect of a rate cut unless the labour market improves substantially, while Lowe clearly stated they’ll consider cutting rates at the next meeting on June 4.

Recall that employment data were released after this latest meeting took place and disappointed, so investors saw this as all but confirming rates will be cut next month. The implied probability for such action soared to ~75%, from roughly a coin flip earlier. Indeed, a cut looks quite likely, otherwise Lowe would have refrained from providing such explicit signals. Combined with the risk for more ‘posturing’ in the US-China trade saga, speculation for a cut could keep the aussie under pressure heading into the June gathering.

The kiwi is also down today, largely in sympathy to the aussie, as there haven’t been any headlines out of New Zealand.

In the broader market, concerns that China will soon retaliate against the blacklisting of Huawei weighed on US equities, with the likes of the S&P 500 (-0.67%) being dragged down by tech heavyweights such as Apple (-3.13%). The mood has improved today, with Chinese markets closing in the green and US stock futures pointing to a positive open, following news that the US will temporarily ease some restrictions on Huawei to minimize disruption for the company’s existing customers.

Besides seeking to limit disruptions, this may also be an olive branch by the Trump administration aimed at restarting negotiations. However, rhetoric out of China has grown increasingly confrontational lately, with Beijing vowing that it won’t be bullied and that it will retaliate to recent actions, so the risks still seem skewed towards more escalation. Hence, the worst may not be over for risky assets like stocks or trade-sensitive currencies such as the aussie and kiwi.

The world’s reserve currency continues to outperform most of its major peers, with the dollar index once again approaching the 2-year highs it recorded last month. The reasoning is quite simple: the US isn’t perfect, but its economy is in much better shape than its key counterparts. In this sense, the outlook for the dollar remains bright overall, even in the face of market speculation for Fed rate cuts.

For the dollar to weaken, one of the gloomy narratives in the other major economies needs to change substantially, with the most important being the European growth story. In that respect, the euro area PMIs – due on Thursday – could play a pivotal role in deciding whether the dollar will remain ‘king’ of the FX market for a while longer, or whether the euro can start regaining some of its shine.