The Aussie weakened during today’s Asian session, as both the RBA meeting minutes and Governor Lowe send dovish signals. The minutes implied that an interest rate cut would be appropriate if there is no further improvement in the labour market. The minutes seem to have also skipped the line that there is “no strong case” for a near term move in policy. Later on, RBA governor Philip Lowe in a speech more or less confirmed what traders suspected, that the bank would consider a rate cut in its June meeting, providing a second hit for the Aussie. We maintain a bearish outlook for the Aussie especially against the USD, as the prospect of a rate cut and intensifying trade wars could weaken further the currency. AUD/USD dropped during today’s Asian session, distancing itself from the 0.6925 (R1) resistance line. Given the bearish momentum of the pair’s price action we could see it retreating further, reopening a bearish leg. Should the pair remain under the selling interest of the markets, we could see it breaking the 0.6840 (S1) support line and aim for lower grounds. Should the pair’s long positions be favoured, we could see it breaking the 0.6925 (R1) resistance line and aim for the 0.7000 (R2) resistance level.

The USD remains strong against a number of its counterparts, as trade tensions between the US and China seem to rise further. The USD Index remained near last month’s 2 year high as it also got a slight boost from rising treasury yields. On the contrary, Fed Chairman Powell’s contribution was little to the rise of the USD, as he said in speech early this morning that it was premature to make judgement about the impact that trade and tariffs would have on monetary policy. On the flip side, BoJ’s Governor Kuroda send out a clear warning that escalating U.S.-China trade tensions could hurt business sentiment and inflict widespread damage on the economy. In the latest episode of the US-Sino trade wars, China’s Huawei seems to be the next victim as Google is about to stop providing software updates required for its software. We expect the USD to currently maintain the role of a safe haven and could get some further support. USD/JPY maintained a sideways motion, between the 110.30 (R1) resistance line and the 109.75 (S1) support line. We could see the pair maintaining a range bound motion in the next couple of days, yet it may prove sensitive to any new headlines about trade frictions and financial releases. Should the bulls dictate the pair’s direction, we could see the pair breaking the 110.30 (R1) resistance line and aim for the 110.90 (R2) resistance level. Should the bears take over, we could see the pair breaking the 109.75 (S1) support line and aim for the 109.15 (S2) support level.

In the European session, we get UK’s CBI trends for May. In the American session, we get the number of US existing homes sold for April and Eurozone’s preliminary consumer confidence for May. In tomorrow’s Asian session we get Japan’s trade balance for April and machinery orders growth rate for March. As for speakers, please note that ECB’s De Guidos, Chicago Fed President Evans, Boston Fed President Rosengren and BoJ’s Harada are scheduled to speak. 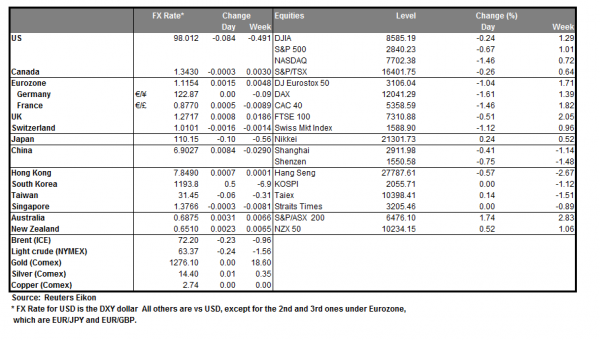