With the ECB meeting over, it’ll be the turn of other central banks to try and impress stimulus-hungry markets with no less than four major policy meetings still to come. The Bank of Japan, the Bank of England, the Swiss National Bank, and of course, the Federal Reserve will announce their decisions over the next seven days. Economic data will also make the headlines as Canada, Japan and the United Kingdom publish inflation stats, China releases industrial production and retail sales numbers and New Zealand will report GDP figures for the second quarter.

Can the aussie and kiwi rebound stretch further?

Vital data out of Australia and New Zealand could make or break the antipodean currencies’ current upswing as investors speculate the timing of the next rate hikes by the RBA and the RBNZ. Australian employment figures and New Zealand GDP growth data are both due on Thursday.

With the RBA currently on hold after two rate cuts in the summer, a healthy increase in employment in August would suggest the next rate cut by the Reserve Bank of Australia may not come until December at the earliest. Similarly, a solid GDP print in New Zealand would make it less likely that the Reserve Bank of New Zealand will ease policy again in its remaining two meetings of 2019. 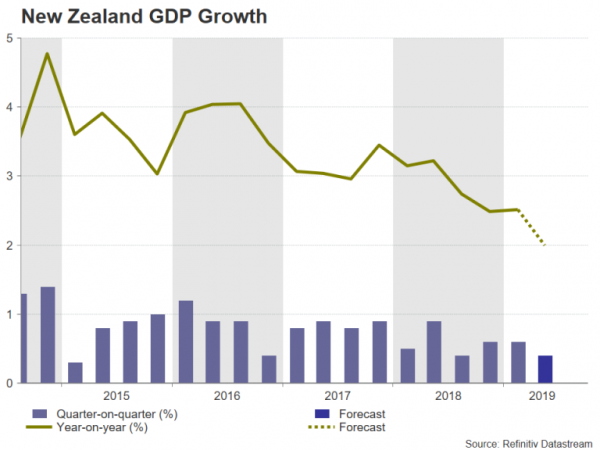 However, an unimpressive set of numbers would see near-term rate cut odds surge, endangering the Australian and New Zealand dollars’ latest rebounds, which are still on shaky grounds.

After July’s dismal industrial production and retail sales data, China is anticipated to report somewhat better figures for August on Monday. Industrial production is forecast to have picked up slightly to 5.2% year-on-year, improving from July’s 17-year low of 4.8%. Retail sales are also expected to have risen more quickly, by 7.9% y/y. However, fixed asset investment is forecast to have eased slightly to 5.6% in the year to August compared to the same period a year ago. 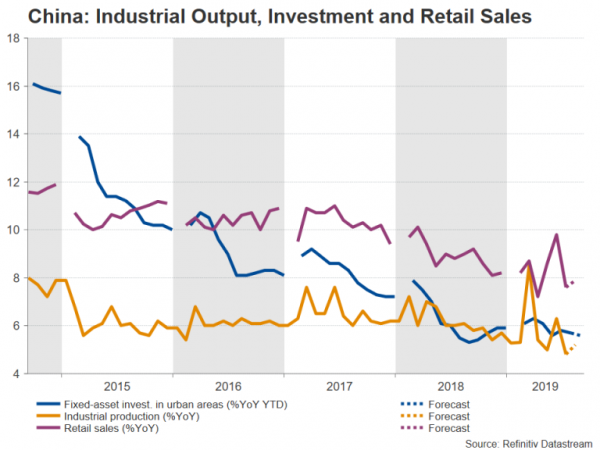 Stronger-than-expected numbers are bound to contribute to the improving risk sentiment in financial markets on the back of the latest thaw in US-China relations. Working-level teams from China and the US are expected to meet in the coming days to lay the groundwork for high-level talks in early October and if the goodwill displayed in recent days continues, stocks and other risk assets will be set for further gains.

In a busy week for central banks, the Fed’s meeting will be the highlight for most traders. The US central bank is widely anticipated to lower the federal funds rate by 25 basis points to a target range of 1.75-2.00% on Wednesday. But with the cut already fully priced in, investors will be more interested in the updated economic projections and dot plot. The easing in trade tensions has led to some paring back of aggressive rate hike bets in recent days but if the Federal Open Market Committee’s (FOMC) predicted rate path is still substantially above that of the markets’, Treasury notes are likely to be sold off, driving yields higher and in turn, the US dollar. 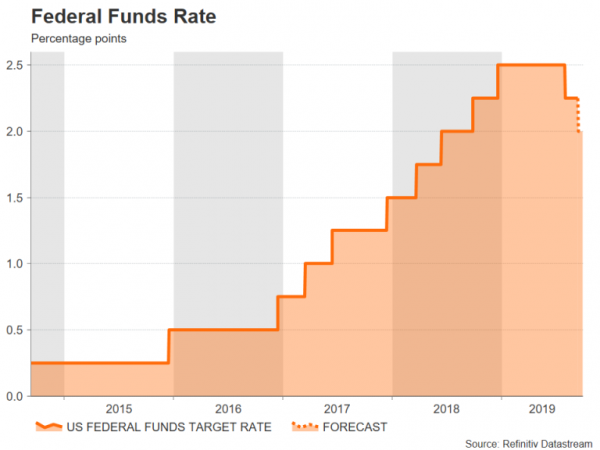 The US calendar will probably attract less attention, however, with no first-tier releases other than Tuesday’s industrial production numbers. Other data will include the New York Fed’s Empire State manufacturing index on Monday and the Philly Fed manufacturing gauge on Thursday, both for September, as well as August building permits and housing starts on Wednesday, and existing home sales on Thursday.

BoJ meeting may not be a bore this time

The Bank of Japan will announce its policy decision on Thursday a few hours after the Fed’s. Speculation is building that the BoJ could ease policy as early as at next week’s meeting following a report by Reuters. Policymakers have become increasingly worried about Japan’s flattening yield curve and one solution would be to cut short-term rates, i.e. the policy rate, deeper into negative territory. Although it’s unclear whether the BoJ will be able to arrive at a decision this Thursday, the slightest hint that board members are moving in that direction could pressure the yen, which has already been falling this month as risk appetite recovered.

Investors have priced only a 12% chance of a reduction in the BoJ policy rate from -0.1% to -0.2% so a shock cut is bound to generate plenty of market reaction.

Prior to the BoJ decision, trade figures will be watched on Wednesday as Japanese exporters continue to feel the pinch of the ongoing tariff war, while the consumer price index (CPI) for August will be important too on Friday. 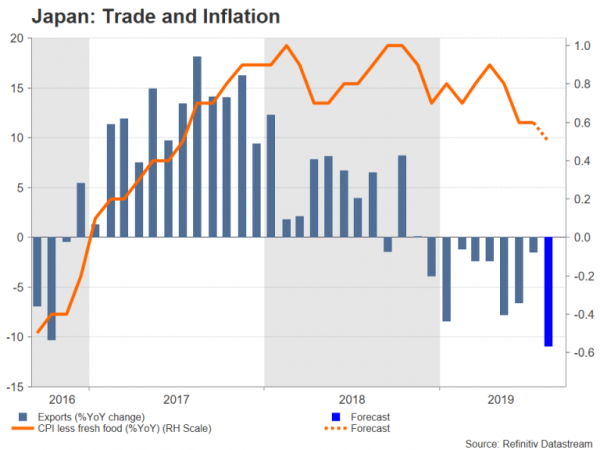 Bank of England to stand pat as UK growth picks up

The Bank of England will also hold a policy meeting on Thursday, but with the Brexit stalemate tying policymakers’ hands, the bank is expected to keep rates unchanged and maintain its slight tightening bias on the basis that the limited slack in the UK economy places the risks to inflation on the upside, even if growth is meagre. The latest data out of the UK has eased fears of an imminent recession and added support to the bank’s view as growth rebounded strongly in July after a poor second quarter and annual wage increases hit 4%.

With the possibility that Brexit could be delayed again beyond October 31, the BoE is unlikely to alter its stance anytime soon and in the absence of a press conference, the meeting is likely to be a non-event.  The focus will instead be on UK data and Brexit developments. August inflation figures are due on Wednesday and retail sales will follow on Thursday. More upbeat numbers would further erase the odds of a BoE rate cut in the near future and bolster the pound. 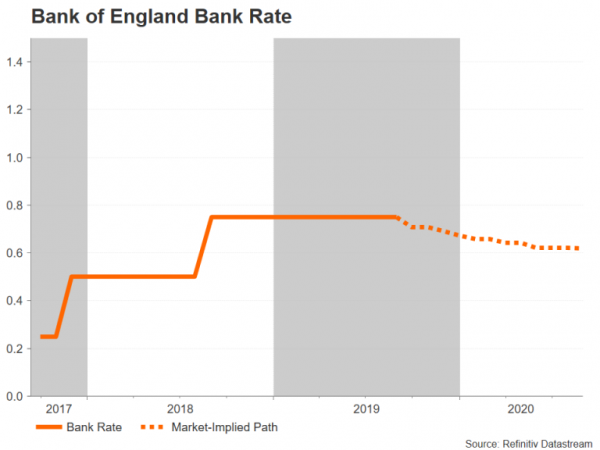 Sterling has rallied over the past two weeks as the British Parliament passed legislation that forces the prime minister to seek an extension to the Brexit deadline. Aside from eliminating the risk of a no-deal Brexit, the move has prompted Boris Johnson to throw his weight behind finding a solution to the backstop problem. Any signs of progress therefore on this front would raise hopes that a Brexit deal can be reached. But pound traders should be on standby for more political storms as the UK Supreme Court will rule on whether Johnson’s decision to prorogue Parliament was lawful.

There will be scant data out of the Eurozone next week with the only attractions for euro traders being the final CPI readings for August (Wednesday) and the ZEW economic sentiment survey out of Germany (Tuesday). But after the ECB decision, there will be more central bank meetings on the continent to keep the headlines coming. Both the Swiss National Bank and the Norges Bank meet on Thursday and there’s the prospect that interest rates could go in opposite directions.

Norway’s central bank is expected to raise its policy rate from 1.25% to 1.50% amid prices pressures from a weak krone and a booming oil sector. However, softer-than-expected inflation and GDP growth data recently have increased the odds that a rate hike could be delayed. Should the Norges Bank keep policy unchanged and revise down its projected rate path, the krone could undo some of its month-to-date gains versus the euro and dollar.

A surprise is also possible from the Swiss National Bank as policymakers might find it hard not to resist following the European Central Bank in cutting rates further below zero. The SNB has kept its policy rate at -0.75% since the end of 2014 and even though market expectations have receded slightly, there’s a chance there will be a cut to -1.00%. The question is whether the SNB will put its faith in the renewed hopes of a US-China trade deal, which have relieved demand for safe havens such as the Swiss franc, and protect its limited arsenal, or take pre-emptive action to spur growth in the Swiss economy. 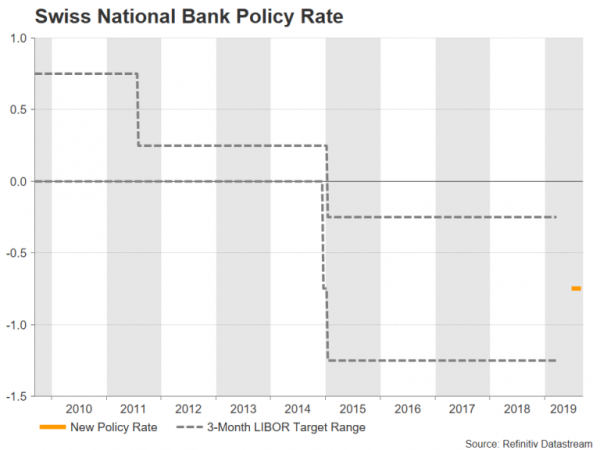 Inflation and retail sales data due from Canada

Economic indicators will be watched out of Canada next week for more clues about the direction of monetary policy after the Bank of Canada failed to provide any signals at its meeting earlier this month. First up are manufacturing sales for July on Tuesday followed by August CPI numbers on Wednesday and July retail sales on Friday. Expectations of a BoC rate cut in the coming months have diminished sharply over the past couple of weeks as investors have turned more optimistic about the global growth outlook. However, the Canadian dollar has been unable to sustain its rebound versus the greenback as oil prices have slipped. But there could be some support for the loonie if next week’s data underlines the sound shape of the Canadian economy.