The sterling weakened against the USD yesterday and during today’s Asian session as British media reported that UK PM was seeking a hard line against the EU on UK’s post Brexit transition period. The report also stated that the revised Withdrawal Agreement Bill would require the UK to have arrangements in place to leave the EU by December 31st next year, setting a hard deadline. Analysts tend to note that crafting such a trade deal with the EU, should take at least more than a year, hence markets had assumed that an extension would be required, now hopes for such an extension fade away. The market seems already to have turned its attention to the post Brexit trade deal with the EU as Brexit is expected to happen after the Tory victory. It should be noted that yesterday’s financial releases about economic activity in the UK didn’t do the pound any favours neither, as they were quite weak. It was characteristic that all three preliminary PMIs for December (for the construction, manufacturing and services sectors) not only missed their targets, but had lower readings than the corresponding November ones. The pound could continue to weaken should there be further negative headlines, yet pound trader’s attention could also be on UK’s employment data today. Cable dropped and broke the 1.3340 (R1) support line (now turned to resistance), aiming for the 1.3170 (S1) support level. We could see the pair maintain the current direction south, yet the RSI indicator in the 4-hour chart seems to imply an undecided market. Should the bears continue to have the upper hand, we could see the pair breaking the 1.3170 (S1) support line and aim for the 1.3015 (S2) support level. Should the bulls take over, we could see the pair breaking the 1.3340 (R1) resistance line and aim for the 1.3500 (R2) resistance hurdle once again.

…while the Aussie weakens further on dovish RBA…

The Aussie weakened further against the USD during today’s Asian session, as the minutes of RBA’s last meeting disappointed the market. The minutes showed that the central bank’s board was concerned that wage growth was too weak to revive either inflation or consumption. Market analysts mention that the minutes practically open the door to another rate cut which is to follow, as early as February, as policy makers agreed that it is important to reassess economic outlook by then. Also, policymakers have also signaled the possibility of more drastic measures, including buying of Government bonds, in a sense opening a QE program. We could see the minutes weighing on the Aussie as they were quite downbeat, yet also developments in the US-Sino front could also create volatility. AUD/USD rose initially yesterday, yet later on once again weakened, correcting below the 0.6875 (R1) resistance line. We maintain the bearish outlook for the pair currently and should it continue to be under the selling interest of the market, we could see it breaking the 0.6850 (S1) support line and aim for lower grounds. Should the pair’s long positions be favored by the market we could see AUD/USD breaking the 0.6875 (R1) resistance line and aim for the 0.6905 (R2) resistance level. At this point we would also like to underscore the that the RSI indicator in the 4-hour chart seems to show an indecisive market as it remains at the reading of 50.

Today, during the European session we get UK’s employment data for October, as well as Eurozone’s trade Balance for October. In the American session we get from the US the number of building Permits for November, the industrial production growth rate for November and just before the Asian session starts, we get the API weekly crude oil inventories figure. Also, in the American session, we get Canada’s manufacturing sales growth rate for October. During tomorrow’s Asian session, we get Japan’s trade data for November and from New Zealand the ANZ Business Confidence indicator for December. 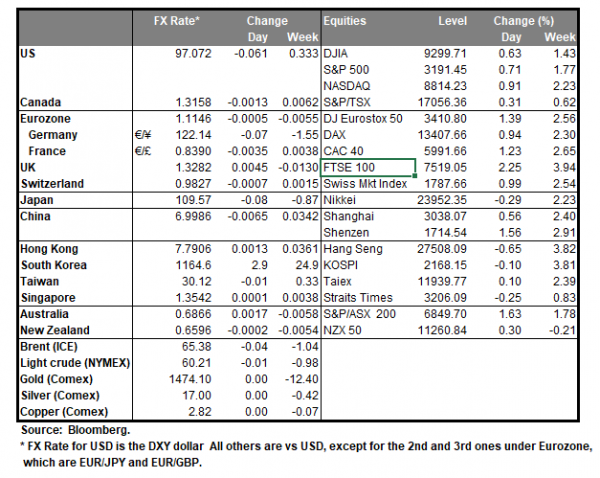