Sino-Australian relations sank to a new low this week after China unexpectedly slapped 80.5% tariffs on Australian barley imports, possibly signalling a new front in the global trade war. China buys about 30% of Australia’s exports and its decision comes days after blacklisting four Australian abattoirs that export beef. But while China’s actions must be ringing alarm bells in Canberra, the Australian government is not planning retaliatory tariffs, adding weight to speculation that there’s more than meets the eye in this stand-off. That’s not to say, however, that the dangerous political games won’t leave any economic casualties, which may explain why the Australian dollar’s rally has lost some steam lately. 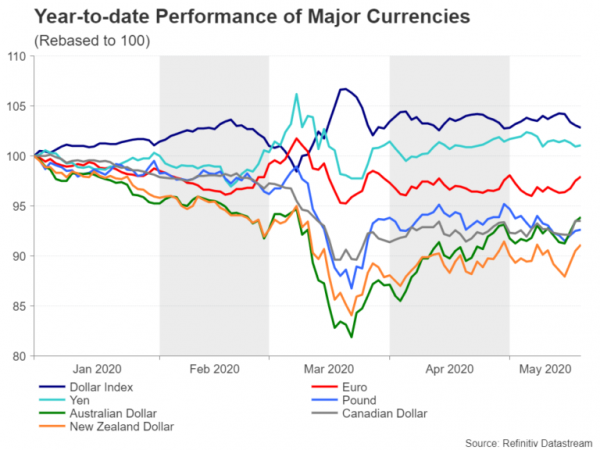 Diplomatic flare ups between China and Australia aren’t anything new. The two countries often find themselves embroiled in some dispute and it is usually because Australia is making a stand against China over issues being fought or advocated by its close ally, the United States. During the coronavirus pandemic, Australia has again put its relationship with Washington before that with Beijing.

Australia was one of the first countries to demand an investigation into the origins of the coronavirus and has questioned China’s account of how the disease began to spread. US President Donald Trump has publicly expressed similar doubt. Unsurprisingly, China was angered by the calls for an international investigation even though it has backed a watered-down version of Australia’s proposal. The European Union-drafted resolution for an inquiry into the pandemic has just been passed by the World Health Assembly, but only because care has been taken to avoid any finger pointing at China.

‘Not a trade war’

However, Australia has not softened its criticism of China and this is not going unnoticed in Beijing. The ban on four Australian red-meat-processing plants and most recently, the hefty levy on barley, indicate China is not in a forgiving mood and this could just be the start of more trade restrictions on export-reliant Australia. Officially, China says the ban on beef was imposed because the four companies violated technical requirements and the duties on barley relate to a row over Australian subsidies that dates back to 2018.

But the timing says otherwise and given Australia’s other recent actions (taking part in naval exercises with the US in the South China Sea and banning Huawei from its 5G network on security grounds), tensions between the two countries look set to only escalate. Reports suggest China could target more agricultural products with tariffs as well as add wine and dairy exports to that list. Although tariffs on such products wouldn’t be as catastrophic for Australia than if China was to take aim at its lucrative exports of resources (like iron ore and coal), it would still be a significant blow for an economy that is headed for its first recession in nearly 30 years.

The fear of a much larger fallout over trade is probably one reason why Prime Minister Scott Morrison’s government is not considering retaliatory measures and has only threatened to take China to the World Trade Organization if it does not drop the tariffs on barley. Ironically though, Morrison’s chummy relationship with Trump is what could destroy Australia’s agricultural export industry, to the benefit of the US. China is under pressure to buy more American goods if it is to preserve its trace truce with Trump, with agriculture being on top of the priority list. The row with Australia gives China the perfect excuse to substitute agricultural imports from Australia with US ones.

Other industries that are vulnerable to Chinese sanctions are tourism and education – both important sectors of the Australian economy. Should the trade spat broaden to more areas, Australia’s foreign policy on China would come under serious scrutiny, if not by politicians than by the public, especially now that unemployment is rising and businesses are struggling amid the chaos caused by the global virus crisis.

On the positive side, Australia’s miners – a vital source of export revenue – are likely to be excluded from punitive tariffs as it would be a real challenge for China to find alternative suppliers to replace the huge amounts of iron ore and other metals and minerals it buys from Australia.

This should at least be one major comfort for the Australian dollar, which is highly sensitive to China-related risks. The currency had been on the slide even before the outbreak of COVID-19, weighed by concerns of a trade-war induced economic slowdown in China. In reality, Australian exporters had greatly benefited from US-China frictions. Though this would no longer be the case if China lives up to its side of the bargain of the ‘phase one’ deal with the US and Trump does not act on his war of words against China as he deflects blame for the pandemic that’s crippling America. 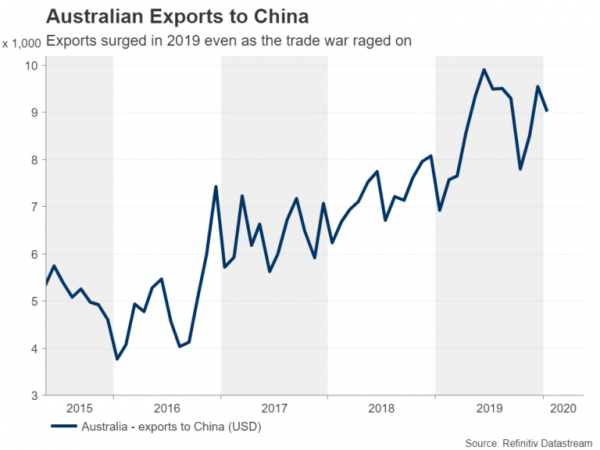 Is aussie about to make a bullish shift?

For now, the risk of further retaliation is something lingering in the background and virus recovery hopes have propelled the aussie this week to break above key resistance at $0.6570 to hit a 10-week high. But even if the Australian government can avoid irking the Chinese further, how much longer can the aussie extend its rebound from the 17-year low plumbed in March? 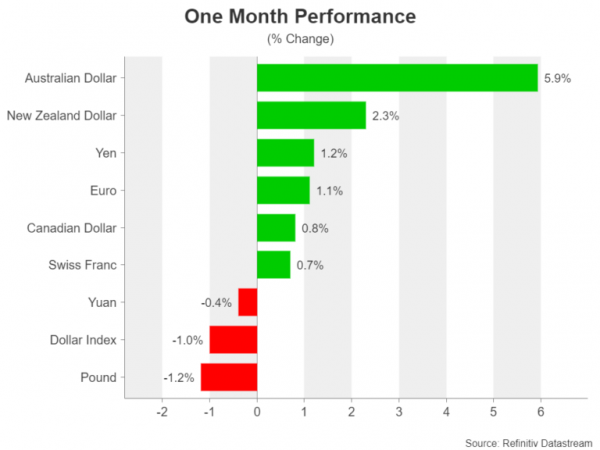 Having fallen more steeply than its rivals at the onset of the virus turmoil, the local dollar has been outperforming since April as Australia has done a better job than most other countries in limiting the outbreak, allowing it to begin relaxing its lockdown. If that positive sentiment continues, the aussie could soon clear another hurdle – the 200-day moving average around $0.6662 – in what would be a strong bullish signal.

However, with many sounding caution on expectations of a speedy recovery – including the Federal Reserve Chairman – and the growing risk of worsening Sino-US and Sino-Australian relations, the aussie’s rebound may struggle to stretch beyond the March sell-off. A retreat towards the $0.6270 area where the 50-day moving average has flatlined is plausible should the market mood turn sour, while the $0.60 level would come under renewed threat in a scenario where there is a second wave of infections or if China takes further targeted action against Australia.