As markets grapple with the real threat of escalating virus cases derailing the global economic recovery, the risk-sensitive Australian dollar will be keeping an eye on a number of indicators out of Australia and China this week. The Caixin/Markit manufacturing PMI due from China on Wednesday (1:45 GMT) and Australian retail sales figures out on Friday (1:30 GMT) will be the main highlights for traders.

After what seemed like an unstoppable rally, growing doubts about a V-shaped recovery have put a lid on the aussie’s 3-month ascent. Of course, the aussie’s uptrend has been more than just about the plethora of stimulus injected by governments and central banks and the lifting of lockdown restrictions around the world. Australia’s relative success in keeping the coronavirus outbreak under wraps and the economy expected to take a smaller hit from the pandemic compared to its G20 peers mean that the Reserve Bank of Australia is likely done with monetary easing for now.

Fading expectations of additional stimulus have helped the aussie build a floor in the $0.68 region, as the currency trades sideways while investors evaluate the virus situation. In contrast, other ‘risky’ currencies like the pound and the Canadian dollar have been correcting lower as those economies may need more stimulus in the coming months.

Another factor in the aussie’s favour has been the encouraging data coming out of China – Australia’s largest trading partner. Having come out of lockdown earlier than other countries, China is considered as being ahead of the global recovery curve and therefore its PMIs are being watched carefully for clues as to where growth is headed. So far, the services sector is seeing a stronger rebound than manufacturing, which is of more importance for Australia’s export-dependent miners that keep the trade balance in the black. 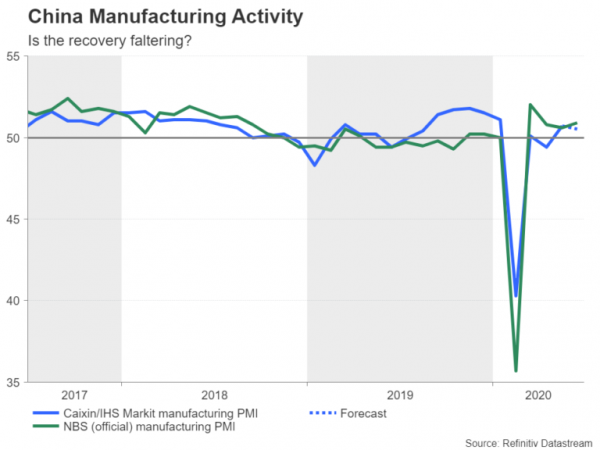 The manufacturing recovery is expected to have suffered a mild setback in June, with the Caixin/Markit PMI forecast to have edged down from 50.7 to 50.5. That would indicate only a marginal increase in manufacturing activity in June, with the weak global backdrop possibly weighing on Chinese exporters. However, given that lockdown rules were relaxed further in June in many countries, a stronger-than-anticipated number is more probable than not, especially after the official manufacturing PMI rose unexpectedly in the same period.

The aussie could jump higher on positive Chinese PMIs, climbing back above the $0.69 level. Should it receive a double boost if domestic retail sales data were to also beat expectations, the aussie could make another attempt for the $0.6975 barrier, which has twice capped gains during June.

Australian retail sales surged by 16.3% month-on-month in the preliminary estimate for May published by the Australian Bureau of Statistics on June 19. If that figure is confirmed or bettered in the final print, it would not only represent the biggest monthly increase in retail sales on record but would go a long way in cancelling the 17.7% plunge seen in April, bolstering hopes of a V-shaped recovery. 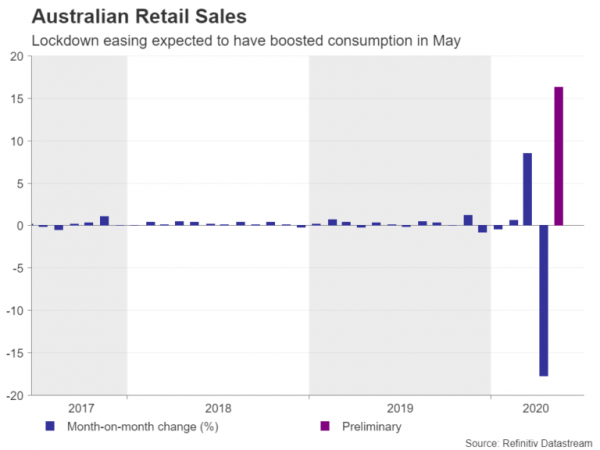 However, with risk appetite looking fragile, any disappointment from the data could heighten concerns that the road to recovery will be a long one. This could push the aussie below immediate support around $0.6835, a break of which would put the $0.68 handle under threat. Failing the $0.68 level as well would turn the focus on the June trough of $0.6774, which is the bottom of the aussie’s recent sideways range.