The coming week looks relatively quiet in terms of crucial events, with the only highlights being the Reserve Bank of Australia (RBA) policy meeting and some economic data out of the US and Canada. As such, the dominant theme that will likely drive both currency and equity markets will be how the global virus picture evolves, particularly in the US, as the epic battle between stimulus-powered bulls and virus-fearing bears rages on. Bears wave the white flag

Global markets continue to be pulled in different directions by conflicting narratives. Rebounding economic data, encouraging headlines around a vaccine, and optimism that a tidal wave of stimulus will get the global economy back on its feet quickly are driving the bull case. The bears argue that a full recovery will take several years, some sectors could be scarred permanently, and fear that the latest resurgence in US infections might derail the reopening process and keep consumption down.

For now, the bulls are winning this battle of narratives. The encouraging US employment report for June was the latest sign that the worst of the crisis is likely behind us, putting the wind back into the stock market’s sails despite another record spike in US virus cases – with the Nasdaq hitting new records in the aftermath.

Alas, everything is not rosy. The coming weeks bring several risks, setting the stage for a rocky ride in risky assets and safe havens alike. For one, the latest reclosures of some businesses in states like California, Texas, and Florida, will only show up in the data for July. But perhaps even more important for market sentiment, is whether and how much more stimulus will be authorized by Congress soon, as several aid programs are set to expire by month-end. 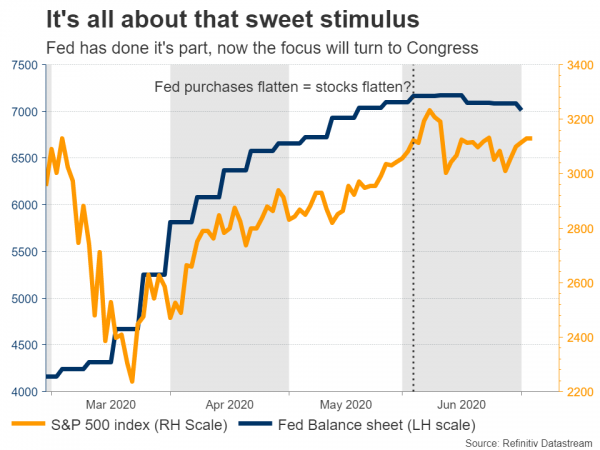 After all, it’s an election year in the States. With just four months to go until Americans head to the polls, there’s no guarantee that lawmakers won’t ‘play politics’ to boost their team’s chances, meaning that we could be facing a bitter drawn-out negotiating process until more government aid arrives.

RBA unlikely to say much, but if anything, slightly dovish

In Australia, the Reserve Bank concludes its latest meeting on Tuesday but is unlikely to say anything groundbreaking, as recent developments have been mostly mixed. For instance, even though the labor market went downhill in May, shedding many more jobs than expected, the services PMI for June shot through the roof, signaling that the economy’s biggest sector is healing quickly.

Now what could tip the scales in favor of a more dovish-sounding statement, is the recent spike in Australian virus cases. At its latest meeting, the RBA seemed quite happy about the sharp decline in infections and the lockdowns being rolled back sooner than expected. Sadly though, new virus clusters have emerged since then, resulting in parts of Melbourne being placed back under lockdown. 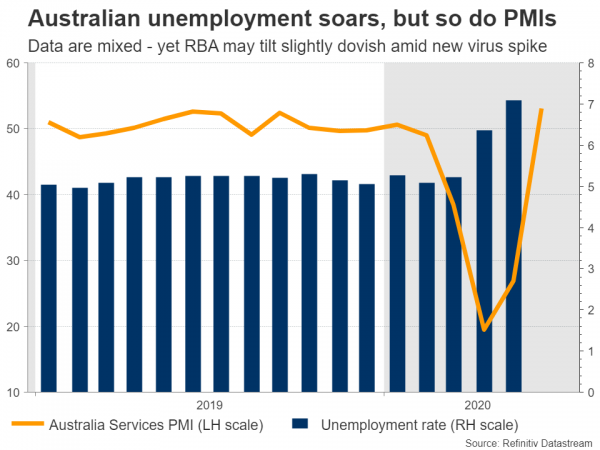 Melbourne is Australia’s second most populous city, so this is a scary sign, which might be reflected in the statement accompanying the decision. Policymakers could thus strengthen their commitment to act again to support the economy, and if so, that might hurt the aussie a little. In the big picture though, the currency’s overall direction will be shaped by global risk appetite and how US-China tensions evolve.

America had a troublesome couple of weeks, with California, Texas, Florida, and Arizona all closing down bars again due to a sharp spike in infections. Combined, these four states are home to almost 100 million people and account for roughly one-third of the US economy, so there’s a real risk of the nationwide recovery faltering if the situation continues to worsen.

Markets don’t seem too worried, perhaps because the death rate is still relatively low and health care systems are better prepared to deal with the virus. That said, recent studies suggest consumption is impacted more by health care worries instead of the lockdowns themselves, so if fear creeps back into people’s minds as the numbers spike, it could be just as bad. 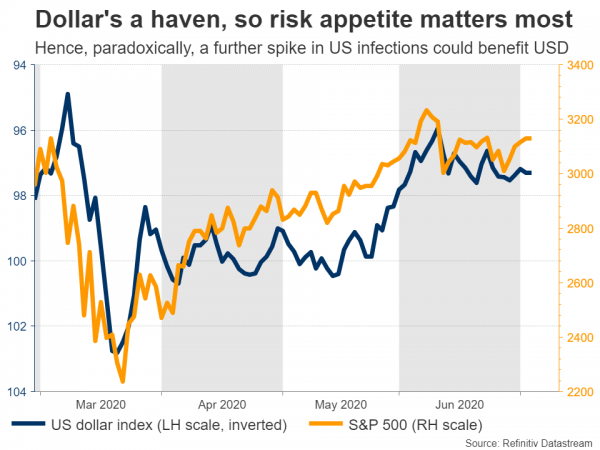 The coming week brings the ISM non-manufacturing PMI for June on Monday, but even greater attention might fall on Thursday’s weekly jobless claims, as they will reveal how much impact the reclosures had on employment. As for the dollar, it has been behaving like a safe haven throughout this crisis, so any negative news tends to boost it nowadays.

One currency that hasn’t benefited much from the improving sentiment, is the Canadian dollar. Even though oil prices have rallied hard, the loonie’s gains have been modest, which may come down to concerns that any weakness in the US will spill over across the border, as Canada relies heavily on the American market. Another reason is the White House considering new tariffs on Canadian aluminum exports. 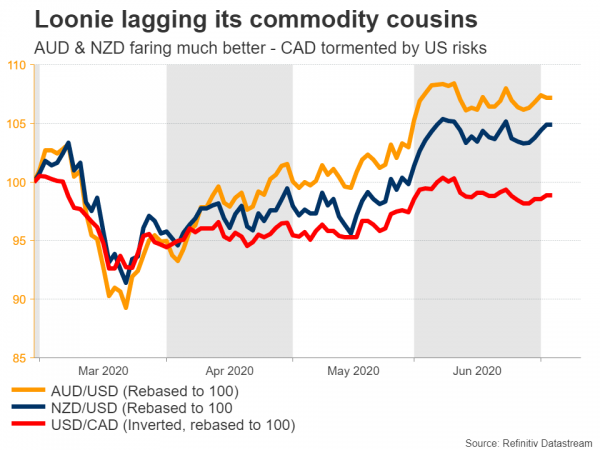 Canada’s jobs data for June are due out Friday, and while an improvement in the labor market – as we’ve seen in other countries – would likely be good news for the loonie, the overarching driver may be how the US virus picture evolves.

Over in Europe, the EU will table a compromise proposal on the recovery fund to breach the gap between the nations that want to give out grants that don’t need to be repaid to the economies devastated by the virus, and those that prefer to give out loans. In short, any signs towards more grants would be a positive sign for the euro, while any signs for more loans would likely be negative.

Across the British channel, Brexit talks will resume in London, though it seems almost no progress has been made lately. The longer this deadlock continues, the greater the risks for the pound.