There will be no shortage of big headline events over the next few days as major data releases, central bank meetings and an EU gathering should make for a busy week. However, the primary focus will be on the recovery story amid further spikes in coronavirus cases in several countries, including the United States. Retail sales numbers out of America and second quarter GDP figures from China should reveal whether the growth rebound is maintaining momentum. On the other hand, policy meetings in Canada, the Eurozone and Japan may not necessarily produce much excitement as all three central banks are anticipated to stand pat. Instead, investors will be more concerned about how close European Union leaders are to agreeing on a substantial fiscal stimulus.Worried BoJ meets but to likely hold off further stimulus for now

The Bank of Japan just downgraded its assessment for all of Japan’s nine economic regions, leaving markets in little doubt that it will echo the downbeat view at its two-day policy meeting on July 14-15. After suffering a relatively mild contraction in Q1, Japan’s economic slump probably deepened in Q2, with retail sales and industrial production plummeting as severely as in countries that had imposed much harsher lockdowns. The recent resurgence of Covid-19 cases in the capital, Tokyo, is likely to further hamper efforts by the government to boost confidence among already spend-shy consumers. 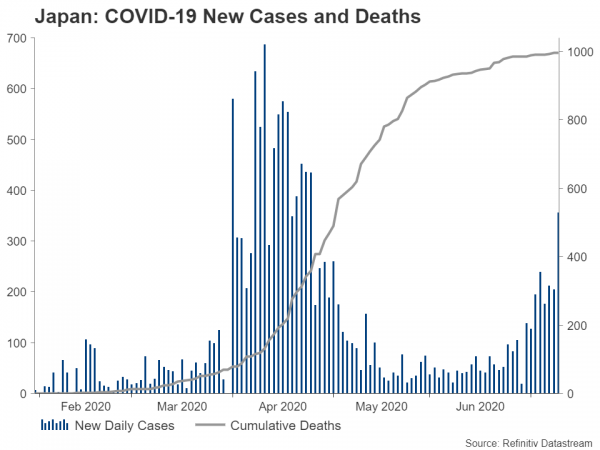 Yet, an exhausted toolbox means the BoJ is not hugely compelled to announce any major policy changes on Wednesday, making perhaps some modifications to its emergency lending programs and hoping that the reopening of businesses will be enough to sustain the recovery. The Bank’s quarterly outlook report may provide some clues as to whether additional stimulus is forthcoming in the near future.

But none of that will be particularly relevant for the yen, as the safe-haven currency see-saws while investors make up their minds on how serious the escalation in virus cases is.

Improved forward guidance eyed from the Bank of Canada

The Bank of Canada will be the second central bank to announce its policy decision on Wednesday and like the BoJ, it is expected to keep policy unchanged. Nonetheless, the meeting could be an interesting one as newly appointed Governor Tiff Macklem signalled in a speech last month that in July the Bank will “lay down a track” for monitoring the data relative to that criteria. The BoC will also publish its latest quarterly forecasts so investors should get a stronger sense of where monetary policy is headed in Canada under Macklem’s leadership as well as what the country’s economic prospects are. 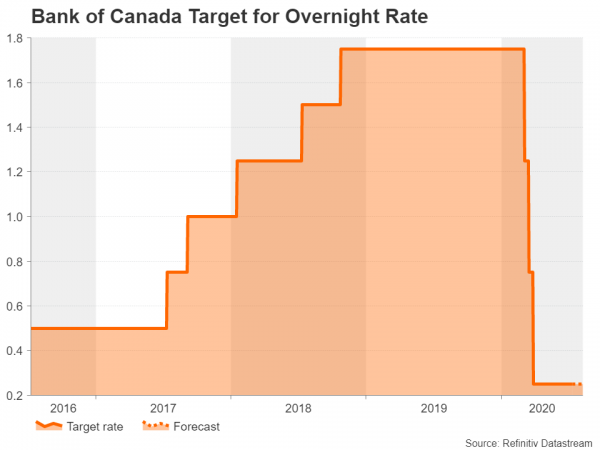 Canada’s GDP plunged by 11.6% month-on-month in April as the economy was shut down due to the pandemic. But with oil prices still well below where they were at the start of the year and its closest neighbour, the United States, seeing a flare-up in new infections, the economic outlook isn’t great at the moment, to say the least. The Canadian dollar’s underperformance compared to its commodity-linked cousins, the aussie and the kiwi, is a reflection of those concerns. Hence, the loonie is bound to face more downside pressure if the BoC strikes a dovish tone next week.

Chinese and domestic data to keep aussie on its toes

China’s GDP estimate for the second quarter is expected to attract plenty of attention on Thursday as the rest of the world watches how the first country to be hit by the coronavirus heals economically from the highly contagious disease. Analysts are forecasting the Chinese economy grew by 2.5% year-on-year in the June quarter, returning to positive territory after shrinking by 6.8% in the prior quarter. But the growth numbers will not be the only data to be watched out of China as June trade figures are due on Tuesday, while retail sales and industrial production indicators for the same month will be released alongside the GDP report. 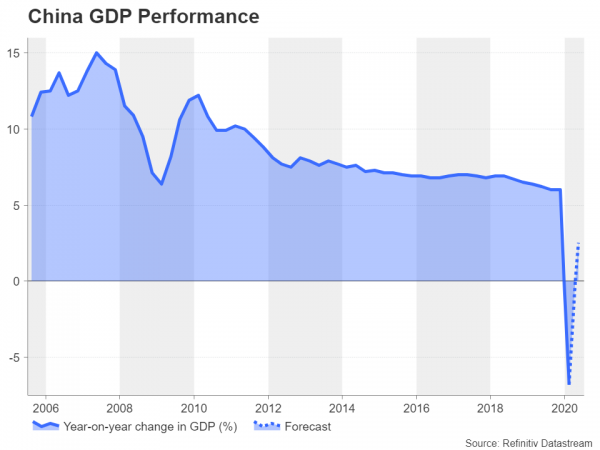 Given the recent market jitters about the recovery possibly getting derailed from a second wave of infections, a weak set of data from the world’s second largest economy could knock investor sentiment, weighing on stocks and on the China-sensitive Australian dollar.

The aussie has so far been resilient to the worsening outbreak in the Australian state of Victoria but poor GDP numbers in China could be what breaks the currency’s bullish bias. Another risk for the aussie is Thursday’s employment report. After two consecutive months of massive job losses, Australia’s labour market is expected to have restored some of those jobs in June. However, if the increase proves to be anything short of spectacular, the aussie may still undergo some selling pressure. 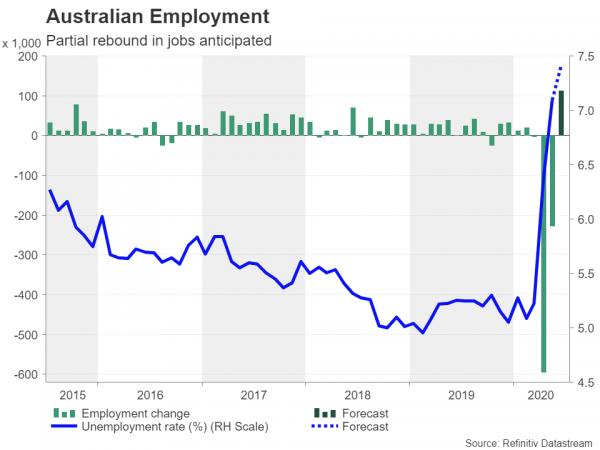 In the absence of any significant domestic drivers, the New Zealand dollar will likely move in tandem with the aussie over the coming week. Traders do have New Zealand’s quarterly inflation print to look forward to on Thursday, but the consumer price gauge may not garner the usual amount of attention as policymakers give more precedence to the virus data.

The European Central Bank beefed up its pandemic firepower by a bigger-than-expected €600 billion at the last meeting, so it’s almost certain to take a backseat in July. However, that’s not to say President Christine Lagarde will get an easy ride at her post-meeting press conference on Thursday as she will probably be quizzed about rumours of a split within the Governing Council about how much of the emergency bond purchases should be weighted towards struggling Eurozone members like Italy.

However, Lagarde is likely to be less evasive when it comes to urging the EU to step up to the plate in the pandemic response. EU leaders meet on July 17-18 for a special summit on a virus relief fund after failing to reach an agreement in June. But a deal is still not guaranteed despite the backing for a €750 rescue package by Germany’s Angela Merkel.

The euro could find itself back on a negative footing against the US dollar if another delay or a compromise deal leaves investors less than impressed, rekindling concerns about the Eurozone’s recovery prospects without a generous handout by the bloc to support the worst-hit member states.

On the data front, traders will be eyeing a turnaround in euro area industrial output in May on Tuesday, though Germany’s ZEW economic sentiment index due the same day may paint a more mixed picture on business conditions in July.

Pound to be inundated by barrage of UK data

As Brexit talks limp on (the next round takes place in Brussels next week), any hints of progress could further bolster the pound, which has perked up on news that the EU may be willing to make concessions on fishing rights. But should Brexit headlines be in short supply, sterling will take its cues from key economic releases scheduled for the next seven days.

Kicking things off, the monthly GDP estimate on Tuesday will be the most crucial. Total economic output collapsed by 20.4% m/m in April as the UK went into lockdown. Investors will be wishing to see a modest recovery in May as some restrictions began to be lifted. Industrial and manufacturing production figures for the same month are also out on Tuesday, along with trade numbers. The consumer price index (CPI) for June will follow on Wednesday and the latest UK jobs stats will round things up on Thursday. 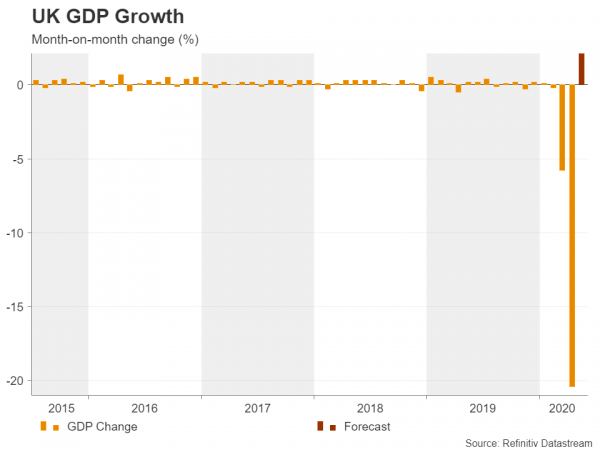 Britain’s finance minister, Rishi Sunak, announced a further £30 billion in fiscal help for the economy on Wednesday, giving the pound a leg up. If there are signs that growth started to bounce back at an encouraging pace in May, the UK currency could get an additional boost in the coming week. However, the rebound could easily falter if global risk appetite was to deteriorate amid worries about the alarming acceleration in virus cases in a growing list of countries.

Recovery in US retail sales expected to slow

Over in the US, the June retail sales report will headline a busy calendar week. But before that, CPI figures will be viewed on Tuesday. The Empire State manufacturing index for July and industrial output numbers for June will be important on Wednesday, while on Thursday, the Philly Fed manufacturing gauge will accompany the retail sales data. Finally, building permits and housing starts are due on Friday, both of which are forecast to have risen in June, and wrapping up the week will be the preliminary reading of the University of Michigan’s consumer sentiment survey.

The dollar has been edging lower over the past 10 days as once again, optimism that the US and global economy will recover strongly from the pandemic overpowers fears that the world is on the verge of a second virus wave. Should next week’s data be mostly positive, traders will have yet more reason to ignore the warning signs.

However, if the forecasts are anything to go by, traders are more likely to be underwhelmed. US retail sales are projected to have increased by 4.5% m/m in June, slowing considerably from the prior 17.7%. If confirmed, the figures would suggest consumption is not rebounding as quickly as hoped, with the stalling of plans by some states to reopen their economies possibly being to blame for the slowdown. 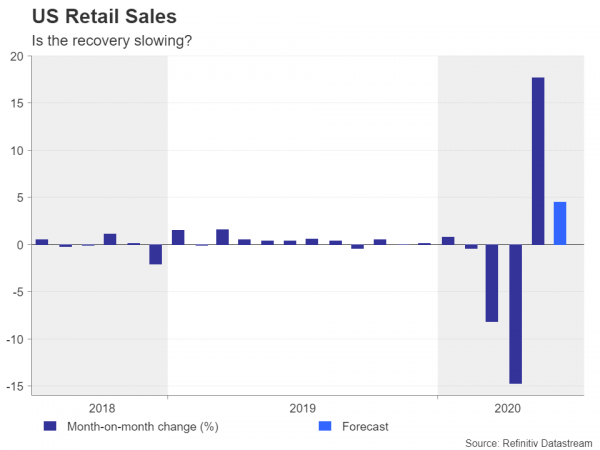 With the risk-on mood looking increasingly fragile, any disappointment in the US data could spark some panic selling, hurting stocks on Wall Street and boosting the greenback, which has continued to behave as a safe haven throughout this pandemic. The next few weeks are already expected to see increased volatility as the new earnings season gets underway. Markets are bracing for what is tipped to be a disastrous season for most companies as they lay bare the worst of the virus damage on their top line.