Week Ahead – The Calm after the US Election Storm

It’s a relatively quiet week coming up for global markets as the election dust settles. The main event will be the RBNZ policy meeting, though frankly, the real driver for most currencies and stocks may be the ‘aftershock’ effects of the election. There’s also a slew of economic data, the Brexit adventure continues, and the earnings season winds down.

There’s no keeping this market down

No ‘blue wave’ in the US election? No problem. This was essentially the market response to what transpired this week, with stocks charging higher in the aftermath and the dollar sinking, even though the odds for powerful fiscal stimulus fell substantially now that Congress will likely remain divided.

Several theories have been floated to justify the strange price action. For instance, President Biden will be unable to implement his tax-raising agenda if the Republicans control the Senate, and the Fed will be forced to dial up its stimulus game now that massive government relief isn’t coming. And the political gridlock also means that Wall Street’s tech titans are less likely to face new antitrust regulations. 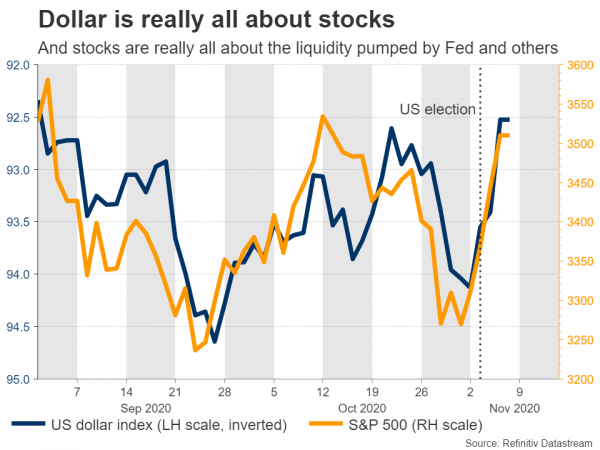 Admittedly though, all these explanations seem to be spinning the narrative to fit the price action. Biden was never going to raise taxes in a substantial manner, and while the Fed may truly be more aggressive now, that probably won’t be enough to negate the damage caused by the absence of a mighty relief package. And on top of everything, Trump could now initiate the mother of all legal battles.

The real answer may be much simpler: there is just no alternative to equities. The world is flush with liquidity and absurd amounts of cash was probably sitting out waiting for the election ‘risk’ to pass. Loose-money policies by central banks have proven to be a very powerful anti-virus drug for the markets, because now that most bonds are negative-yielding assets, all that is really left is stocks. And with the dollar having turned into a safe-haven, how stocks perform impacts the FX market much more.

The question now is whether this risk-on wave can persist and dominate this coming week, where not much else is happening. Admittedly, unless the virus situation takes another dramatic turn for the worse, this rally may still have some life in it. If Europe going back into lockdowns and the US election being this uncertain barely left a scratch on markets, it is difficult to see what will bring them down, especially amid the narrative that big tech firms can flourish even with high infections and anemic growth. 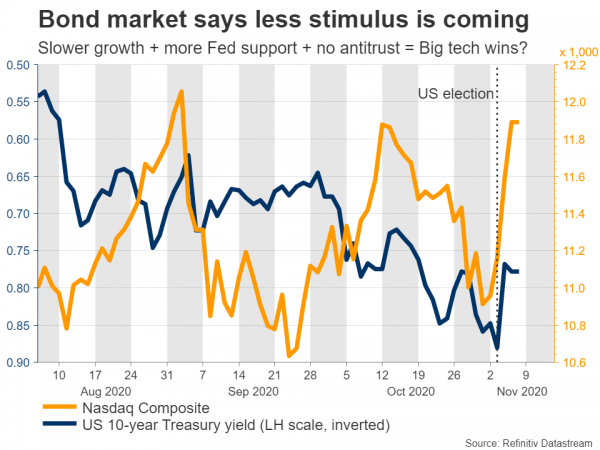 Trump going to the Supreme Court may cause some jitters initially, but investors could ultimately see it as delaying the inevitable. Perhaps the greatest near-term risk is some US states being forced to lock down again soon, as some local healthcare systems are approaching their capacity.

RBNZ to bide its time

The motto of the Reserve Bank of New Zealand (RBNZ) should be ‘go hard and go early’, as this is exactly what the central bank did this year. It cut interest rates to almost zero early on, signaled that negative rates are a realistic option, launched an enormous QE program relative to the size of the economy and bond market, and kept the door open for purchasing foreign assets.

The main reason it has not adopted negative rates already is that commercial banks need some time to prepare their systems for that. Plus, when the RBNZ cut rates in March, it declared that rates would stay unchanged for at least one year, so breaking this promise could damage its credibility somewhat.

Judging by current market pricing, investors understood these signals well. While no action is expected at Wednesday’s meeting, a quarter-point rate cut to 0% is fully priced in by April and another one to -0.25% by October. 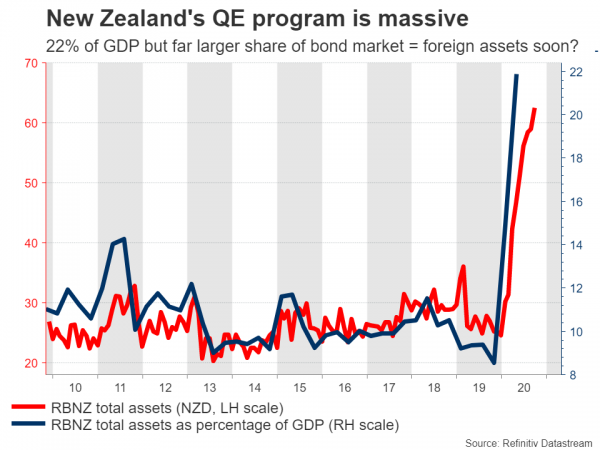 As for the kiwi, the RBNZ meeting is unlikely to be a huge event. Economic data have improved lately, but the central bank could stress that the risks remain firmly to the downside. If anything, a reaffirmation that negative rates are still on the menu might weigh on the kiwi, but not much. Instead, the currency’s broader path will depend mostly on global risk sentiment and how the virus saga evolves.

Elsewhere, China’s consumer and producer inflation data for October are out early on Tuesday. Markets typically pay more attention to producer prices, which are considered a proxy for global factory demand.

Brexit saga could drag on for a while

In the UK, there are a couple of data points coming up, like the latest jobs data on Tuesday and September GDP numbers on Thursday, but the pound no longer reacts to data. Instead, it’s all about Brexit, where the talks will resume Monday. Disagreements remain on the usual issues – fisheries, competition rules, and the governance of any deal – but both sides confirm that progress has been made.

What’s striking is that sterling absorbed the latest UK lockdown announcement without taking much damage, mostly because of growing optimism about an imminent Brexit deal. The latest ‘deadline’ for an agreement is now mid-November. Chances are that this deadline will also pass without a deal, but an accord before year-end is still the most realistic outcome. 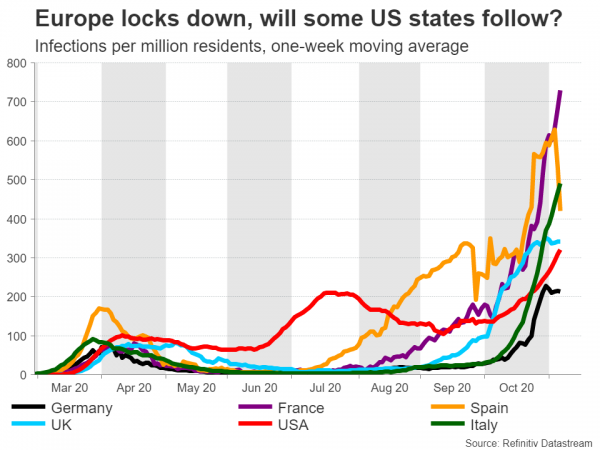 Neither side can afford to add a no-deal Brexit to the long list of problems faced by their economies, so compromises will eventually be made. The question is when that will happen, and whether we will get one final round of drama before it does.

In America, CPI inflation data are out Thursday, while in the euro area, the second estimate of Q3 GDP is due Friday. Admittedly, neither is likely to matter much for euro/dollar, which remains at the hands of post-election flows, relative Fed/ECB policy, and the outcome of the Brexit talks.

In the grand scheme of things, even if the pair continues to edge higher for now, a break above $1.20 may prove quite difficult given that the ECB will likely step up its verbal interventions the more the pair climbs.

Beyond all this, the earnings season enters its final stretch with the likes of Disney, McDonalds, Cisco, and Tencent being among the biggest names to report results.