The New Zealand dollar has recorded slight gains in Wednesday trade. Currently, NZD/USD is trading at 0.6991, up 0.24% on the day. On the fundamental front, New Zealand’s trade deficit is expected to drop to NZ$500 million, down from NZ$1.01 billion beforehand.

Investors and traders who have a stake in the New Zealand dollar may not be particularly interested in the country’s housing market. However, it is housing which has been the catalyst for the kiwi’s sharp gains this week. On Tuesday, Finance Minister Robertson requested that the RBNZ take into account the housing market as part of its monetary policy. The housing market has been red-hot, and mortgage lending has hit record highs for a second successive month. There has been a sharp increase in high loan to value ratio (LVR) loans. The central bank is concerned about the high leverage loans which are fuelling the hot housing market and plans to impose restrictions on such loans early in 2021.

RBNZ Governor Orr responded to Robertson’s request, saying that the central bank’s “monetary policy actions have been, and will continue to be, effective in supporting the economy through the COVID-19 economic shock.” The markets jumped on this statement as a message that the RBNZ was not planning any easing measures in the near future, including negative rates. This resulted in the New Zealand dollar posting sharp gains on Tuesday.

The RBNZ remained in focus on Wednesday, with the release of the semi-annual RBNZ Financial Stability Report. RBNZ Governor Orr commented on the report, saying that the economy has proven resilient against the economic shocks caused by the Covid pandemic. At the same time, Orr cautioned that Covid could still have a negative impact on the economy. Orr added that low interest rate levels have ensured that the New Zealand dollar has remained competitive. 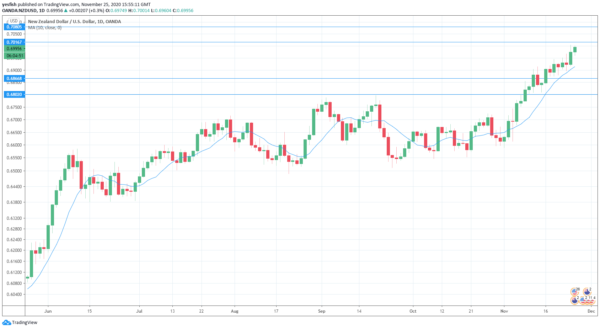 What Does Biden’s Stimulus Plan Mean for the US Dollar?