Action Forex
HomeContributorsFundamental AnalysisWeek Ahead – US Inflation to Fire Up Again, Watch Out Fed

Week Ahead – US Inflation to Fire Up Again, Watch Out Fed

Riskier assets have been under pressure ever since Omicron entered the equation, fearful that central banks cannot ride to the rescue this time because inflation is so hot already. This puts even more emphasis on the next edition of US inflation, which could accelerate towards 7% in yearly terms. The Bank of Canada and Reserve Bank of Australia will also hold policy meetings.

The Fed chief dropped a bombshell on financial markets this week by signaling that his central bank will consider accelerating the pace at which it withdraws liquidity from the system. He downplayed the Omicron variant and stressed repeatedly that inflation risks have intensified.

With inflation high and rising, the jobs market healing quickly, and consumption booming, the Fed is clearly preparing to step on the brakes to prevent the economy from overheating. Powell suggested it might be appropriate to end asset purchases “a few months” earlier, essentially opening the door for raising interest rates sooner. 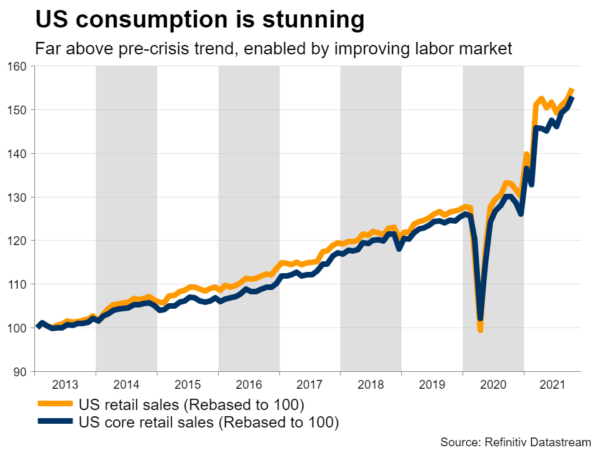 Now the question is whether the Fed will announce this at the next meeting in mid-December, and if so, how much faster it will dial back asset purchases. As such, the upcoming inflation report on Wednesday will be absolutely crucial.

Official forecasts are not available yet, but the latest Markit PMI surveys for November showed that US companies raised their selling prices at a pace that “matched October’s series record high”. The monthly CPI rose by 0.9% in October, so if we assume a similar gain in November, that would push the yearly CPI rate towards 7% from 6.2% currently.

That could seal the deal for an acceleration of tapering at the next FOMC meeting. Besides Chairman Powell, several other Fed officials have already said they are open to such an action, including Vice Chairman Clarida, Board Governors Waller and Quarles, and regional Fed presidents Daly, Mester, Bullard, and Bostic. 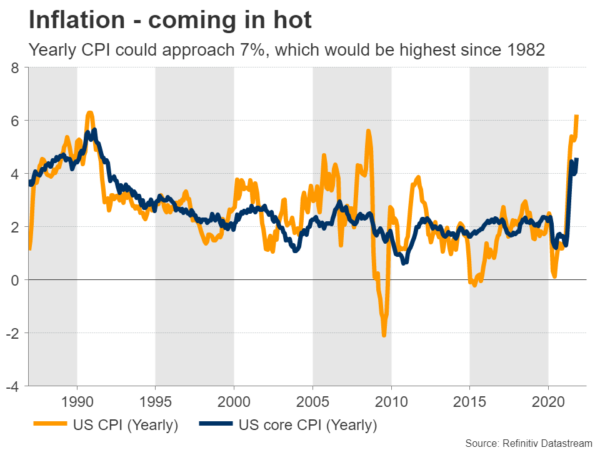 As for the dollar, the outlook remains positive and a faster conclusion of asset purchases might reignite the uptrend. Markets are currently pricing in two Fed rate increases for next year and even odds for a third one, so there is scope for market pricing to turn more hawkish. In contrast, the euro continues to grapple with covid restrictions that could hamstring economic growth.

The Reserve Bank of Australia will wrap up its policy meeting on Tuesday. No policy changes are expected, so the reaction in the aussie will likely depend on any signals about future moves. There has been both good and bad news since the RBA last met.

On the bright side, the lockdowns didn’t hit economic growth as much as feared in Q3, consumption was strong in October, and the latest PMI business surveys were encouraging. However, the labor market got struck by lightning in October, with the unemployment rate jumping substantially and a considerable amount of jobs being lost. 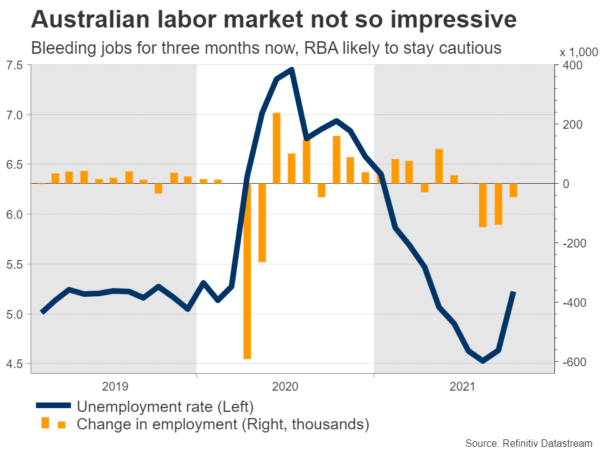 Combined with the slowdown in China, which matters tremendously for Australia given their close trading relationship, the RBA is likely to remain cautious. Money markets continue to price in three rate increases for next year, whereas the central bank insists it will deliver none. A repetition of that guidance could deal another blow to the battered aussie. In the bigger picture, the currency is at the mercy of expectations for global growth and iron ore prices.

It’s a completely different story in Canada, where the economy is booming. Inflation is scorching hot, the jobs market has almost recovered fully, businesses are feeling optimistic, and the housing market is on fire. The only dark spot is the recent plunge in oil prices, but that follows a very strong rally, so it shouldn’t be very worrisome. 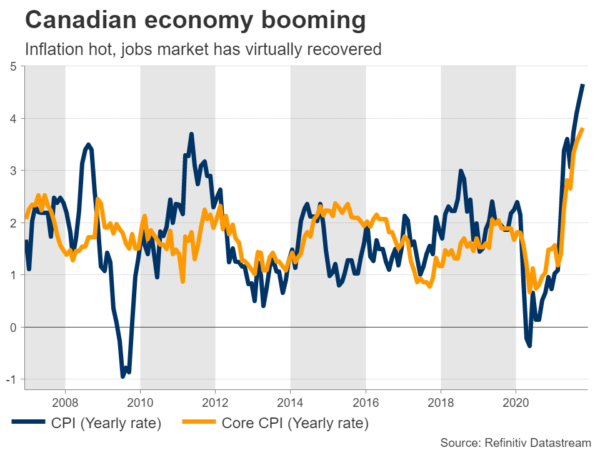 The Bank of Canada took markets by storm at its latest meeting, ending its asset purchase program early and signaling that rate increases are on the menu around the middle of next year. That initially propelled the loonie much higher, before the retreat in oil prices clipped the currency’s wings.

This meeting is unlikely to change much for the loonie. Markets are currently pricing in five rate increases for next year, which seems fair given the strength of the economy. The Omicron variant complicates things, but unless economic data take a hit or new restrictions are announced, it is unlikely to stop the central bank. 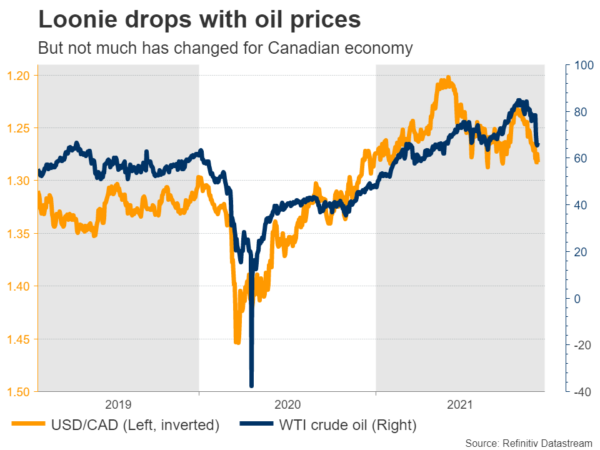 In other words, it is difficult to be pessimistic on the Canadian dollar. It has taken a sharp hit this past month, but that really boils down to external factors. Eventually, it could realign with the healthy fundamentals of the Canadian economy, especially if oil prices stabilize.

The British pound has also suffered ever since Omicron appeared, most likely because of its strong correlation with global risk sentiment. Some signals that the Bank of England is not in a hurry to raise interest rates after all haven’t helped either. 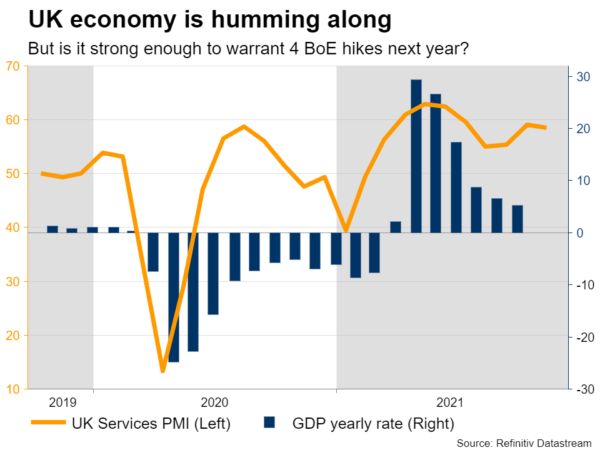 Monthly economic growth data for October will be released on Friday and could be crucial as traders try to decide whether the current market pricing for four rate increases next year is realistic or not.

Finally, Chinese trade numbers will hit the markets on Tuesday ahead of the inflation report on Thursday.