After another US inflation surprise, CPI data will be dominating the agenda in most other markets in the coming week, shifting the focus away somewhat from the greenback. The pound will likely attract the most attention in what will be a busy week for the United Kingdom, as apart from the economic releases, the budget statement will be watched amid lingering worries about high borrowing. Growth indicators will be important in China and Japan, while in the United States, the main highlight will be the retail sales numbers.

A slew of data and another budget for the pound

It’s been a tumultuous period for sterling these last couple of months and the coming week could again be a bumpy one. Aside from the fact that the week is jam-packed with key economic gauges, the government will unveil its much-anticipated Autumn statement. According to reports, the new chancellor, Jeremy Hunt, is planning to announce a combination of spending cuts and tax increases to fill a fiscal hole that was exacerbated by the mess created by the prior administration.

Hunt and Prime Minister Rishi Sunak will have quite a battle on their hands on Thursday to regain some economic credibility. But as long as the government’s own numbers add up and match the independent forecasts provided by the Office for Budget Responsibility, the event could be positive for the pound.

There is a danger that Hunt and Sunak go too far with their fiscal tightening, which would imply the Bank of England might not have to raise interest rates as aggressively, although this may not necessarily be bad for sterling and could even boost it.

Regardless, it will be hard for the currency to ditch its clouded outlook entirely as the incoming data is expected to confirm a deteriorating economic backdrop with too high inflation. The employment report for September is up first on Tuesday, to be followed by the consumer price index for October on Wednesday. Retail sales figures will round up the week on Friday. 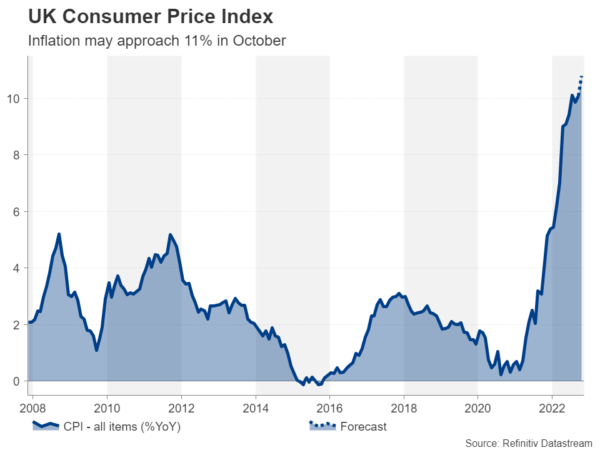 Few drivers for the euro

Across the channel, the euro’s recovery above parity against the US dollar might lose momentum amid mostly second-tier releases on the European calendar. Industrial production for September on Monday, quarterly employment estimates on Tuesday, alongside the second reading of Q3 GDP will all help investors get a better idea of how the Eurozone economy is riding out the energy and inflation storm. However, Thursday’s final estimate of October inflation is the only one that’s likely to spur some reaction in the euro, but only if there is an upward revision.

Otherwise, the euro will take its cues from the dollar and possibly from ECB speakers, who are growing ever more hawkish. Changes in sentiment towards the pound might also spill over to the euro given that lately, investors increasingly see the outlook for the UK and Eurozone economies being intertwined, with their fate tied to how the energy crisis will unfold.

Dollar bulls suffered their biggest setback in more than six years this week after CPI inflation unexpectedly eased to below 8.0% y/y in October. A 50-basis-point rate hike by the Fed in December now seems more likely than a 75-bps one, but there could be some support for the US currency next week from the latest retail sales numbers on Wednesday. 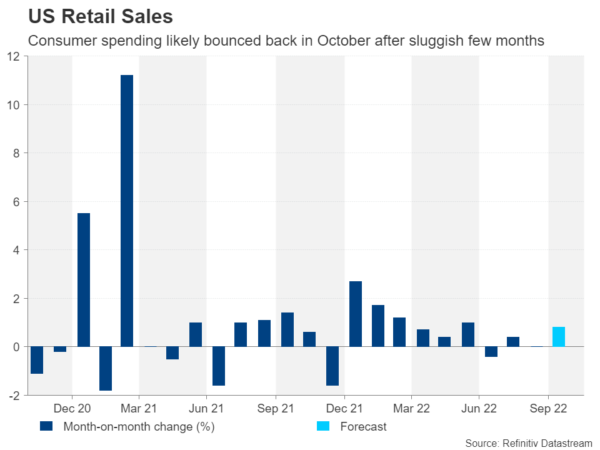 Retail sales are forecast to have bounced back by 0.8% month-on-month in October after being flat in September.

However, upbeat consumer data alone might not be enough to bolster the dollar. It’s unlikely that the other releases, which include producer prices on Tuesday, industrial production on Wednesday, and housing numbers on Thursday and Friday, will significantly brighten the picture.

But as the dollar possibly enters a prolonged phase of being stuck on the backfoot, equity markets stand a good chance of extending their gains over the coming week.

The battered Japanese yen has gotten off to a positive start in November and its fortunes could further improve next week.

GDP estimates out on Tuesday are expected to show the Japanese economy grew by 0.3% q/q in the third quarter – a comparatively solid clip. There will also be data on machinery orders (Wednesday) and trade (Thursday), but investors will care more about the CPI stats out on Friday.

Whilst still well below other countries, inflation in Japan has been steadily edging higher and the core measure that the Bank of Japan targets is forecast to have maintained the upward trend, climbing further above 3% in October. 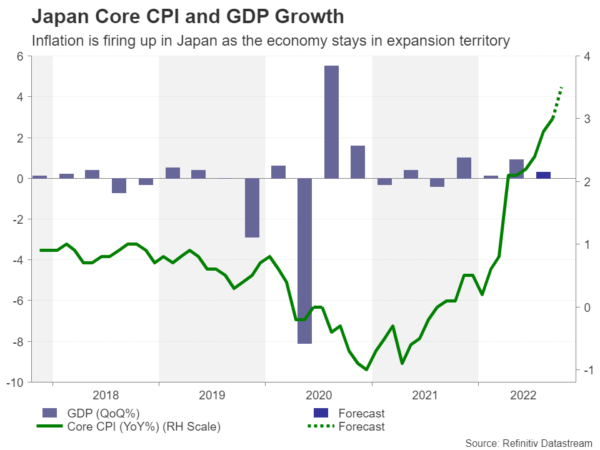 With the BoJ tepidly hinting that the time to start thinking about exiting its ultra-accommodative stance may be nearing, any upside surprises in the inflation readings going forward may fuel speculation about the timing of a policy shift by the Bank, lifting the yen.

Aussie and loonie look to domestic data as China stutters

Whilst the Japanese economy reaps the benefits of still plentiful stimulus by the BoJ, there is concern that China’s economy hasn’t been receiving enough policy support from authorities as it struggles under the weight of lockdowns and a slowly unravelling property crisis.

Industrial output and retail sales figures due Tuesday are not expected to ease slowdown concerns as a softer print is anticipated for both in October. 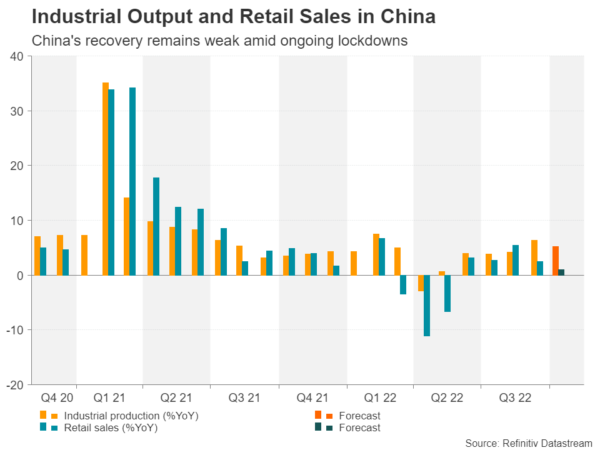 Nevertheless, hopes are high that the Chinese government will soon do away with draconian Covid restrictions so investors might not react too negatively to disappointing data.

Hence, for the China-sensitive Australian dollar, domestic indicators will probably be more crucial as investors have upped their bets lately that the Reserve Bank of Australia will keep rates on hold at its next meeting in December.

The RBA publishes the minutes of its prior meeting on Tuesday, and on Wednesday and Thursday, quarterly wage and employment numbers will be watched, respectively.

A stronger-than-expected rise in employment in October would lessen the odds of no change in rates in December, potentially boosting the aussie as it rebounds from the October lows against the greenback.

Another central bank that has recently shifted into lower gear is the Bank of Canada, although the local dollar remains one of the top performers this year.

Wednesday’s CPI report could determine if the BoC opts for a 25- or 50-bps hike at its December gathering.