Canada looks on track to deliver a GDP reading next week that’s just above our 1% (annualized) forecast for Q3. Still, that’s a marked slowdown from the 3.2% average rate over the first half of 2022—a figure that captured much of the initial “reopening” rebound in economic activity as pandemic restrictions eased. Growth in household consumption of services continued to rise in Q3 (based on our own tracking of consumer purchases) but the pace nevertheless slowed after surging more than 16% in Q2. And purchases of physical goods likely declined outright for the first quarter this year.

Residential investment is expected to have fallen again in Q3 following an already substantial drop in Q2 amid cooling housing markets. Other non-residential business investment likely declined too, as more businesses anticipate a weaker outlook in the quarters ahead. An increase in net trade will mechanically add to GDP growth in Q3, but will be offset by declining inventory growth. Indeed, a surge in exports appears to have been largely drawn from existing stocks rather than new production.

We see some upside risk to StatCan’s preliminary report of a 0.1% increase in September GDP, with the surprise mostly driven by higher than expected growth in non-conventional oil and gas extraction. And growth in October probably remained positive. Total hours worked rose by a solid 0.7% in October, and advance readings for manufacturing, wholesale and retail sales were all positive. But there are still signs that broader growth momentum in the Canadian economy is losing strength. Higher interest rates continue to filter through to household borrowing costs and inflation is cutting into purchasing power. Though labour markets surged back in October, average employment growth still slowed to under 10,000 per month over the last half a year (following softer numbers in the summer and early fall). We are looking for a smaller 5,000 position increase in employment in November and a tick up in the unemployment rate (though to a still very low 5.3% rate from 5.2% in October).

Slowing growth prospects and early signs of easing inflation pressures over the past months are all supportive of the view that the Bank of Canada could be close to the end of its current interest rate hiking cycle with our own base case assumption calling for one more 25 basis point increase in the overnight rate in December. 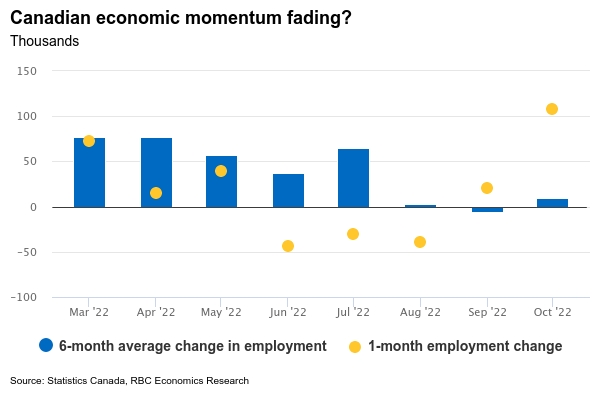 U.S. personal spending likely revised up to 0.69% in October, mainly driven by relatively strong retail sales (1.3%). We expect U.S. personal income to edge up 0.4% in October (the same rate as in September) with a 0.4% increase in average hourly earnings and a 261,000 rise in payroll employment during this period.

U.S. payroll employment likely trended up in November, by 150,000, and the unemployment rate is expected to tick up to 3.8% from 3.7% in October. Job openings are still high but have been edging lower. 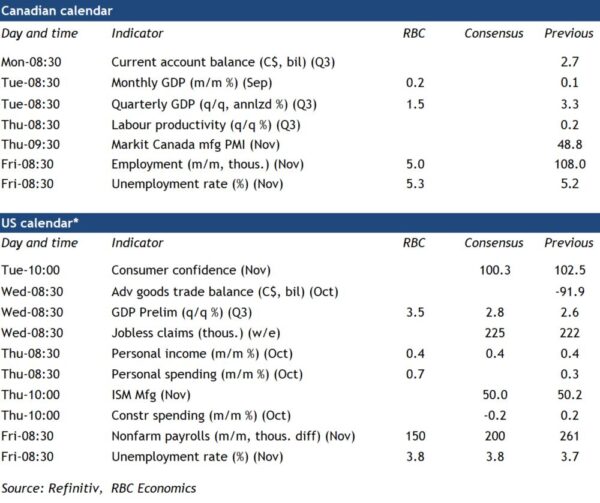