It will be an important week for major economic releases over the next seven days with key indicators due from all the big markets. Inflation and retail sales data will dominate the calendar followed by employment numbers. A policy meeting by the Bank of Canada will also be eyed. However, with geopolitical risks currently running high, a worsening risk sentiment could dampen market enthusiasm for the data.

While simmering tensions in the Middle East may have distracted President Trump’s attention away from the trade dispute with China, markets will still be watching for any developments on that front. In particular, investors will want to see the two sides begin negotiations to demonstrate progress after China’s President signalled willingness to compromise in a key address this week. A bigger imminent risk at the moment, however, is the real threat of military action by the United States and its allies in Syria. A military response by the West to the suspected chemical weapons attack in Syria could escalate into a wider conflict with Russia and other players in the Middle East. Safe-haven assets such as gold and the yen will likely remain elevated in the coming week in the absence of a diplomatic push to ease Syrian tensions, while oil might also receive an additional lift in case of supply disruptions.

Some easing in US-China trade tensions helped the Australian dollar to climb to three-week highs this week. The aussie could extend those gains if Thursday’s employment data shows there was another month of solid job gains in March. Before that though, the minutes of the Reserve Bank of Australia’s March policy meeting will come into focus. No surprises are expected from the minutes as the RBA has been pretty consistent recently in maintaining a neutral stance.

Staying close to the region, New Zealand will publish quarterly inflation figures on Thursday. After briefly rising to within the upper band of the Reserve Bank of New Zealand’s 1-3% inflation target in the first quarter of 2017, CPI has since fallen back below 2% and stood at 1.6% in the final quarter of last year. It is expected to drop further in the first three months of 2018 to 1.0% year-on-year. The number may not necessarily alarm the RBNZ, which may decide to take comfort from the anticipated 0.4% quarter-on-quarter gain instead and stick to its neutral path. However, if there is a lower quarterly reading, it could undo some of the kiwi’s sharp two-week gains and thwart a potential break above $0.74. 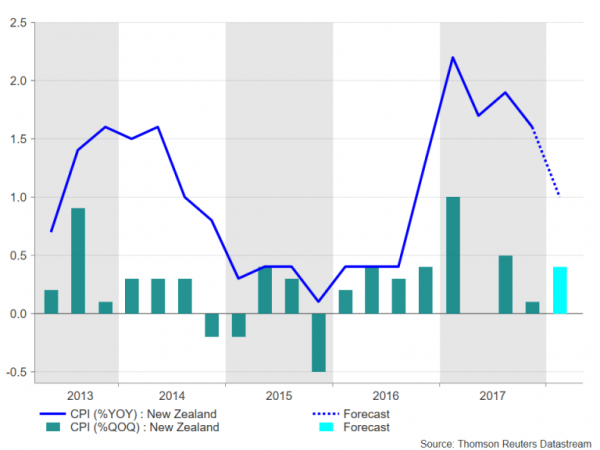 Another country reporting inflation data next week is Japan. The core CPI rate targeted by the Bank of Japan reached a milestone in February by climbing to 1% y/y – the halfway mark to the BoJ’s 2% objective. However, the snail-pace progress will likely be highlighted again in March as core CPI is expected to dip back to 0.9% y/y in Friday’s data. Also out of Japan next week are the latest trade figures, due on Tuesday. Japanese exports have been growing positively since the end of 2016 but have slowed substantially from 18.1% in August 2017 to 1.8% in February. Further deterioration could raise some alarm about the sustainability of the current upturn in Japanese growth and would suggest a stronger yen is weighing on exports.

Investors will get a good insight into China’s economic performance in the first quarter of the year as the GDP report is out along with monthly industrial output, investment and retail sales figures. All the data are due on Tuesday. China’s economy is forecast to have expanded by 6.7% y/y in the January-March period, marginally lower from the prior quarter’s 6.8% rate. If confirmed, it would underscore the view that only a mild slowdown is anticipated this year. A stronger-than-expected reading on the other hand would be especially impressive given the winter pollution curbs and tighter lending controls. But a disappointing figure could raise concerns of a deeper slowdown. 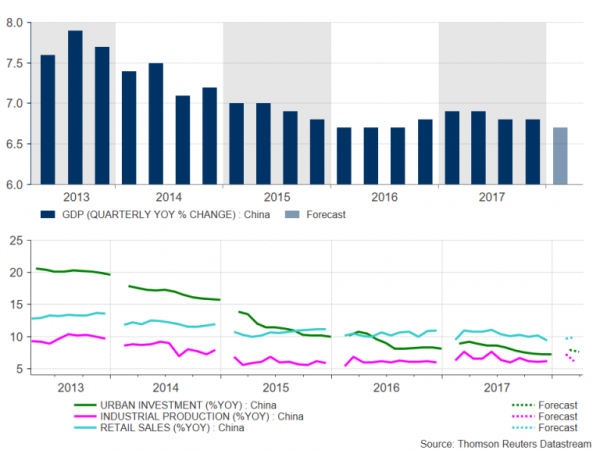 Looking at the other figures, industrial output is forecast to moderate from 7.2% y/y in February to 6.2% in March and investment in urban areas is expected to slow from 7.9% to 7.6% annually in the year-to-date in March. Retail sales meanwhile are forecast to quicken to 9.9% y/y. All three indicators were boosted in February from the Lunar New Year celebrations.

It will be a relatively quiet week for the Eurozone with only the ZEW economic sentiment index out of Germany likely to grab much attention. The closely watched business confidence gauge fell to the lowest since September 2016 in March as a stronger euro and rising trade war fears weighed on investor sentiment in the Eurozone’s largest economy. The ZEW economic sentiment index is forecast to decline further in April to -1.3 from 5.1 when released on Tuesday. On Wednesday, the final reading of euro area inflation for March is expected to stay unrevised at 1.4% y/y, and on Friday, the flash print of the consumer confidence index for April will be watched.

Major data out of the UK next week will be scrutinized as key measures for prices, the labour market and consumer spending will be the last releases before the Bank of England’s next policy meeting on May 10. The jobs data is out first on Tuesday. The unemployment rate is expected to hold steady at 4.3% in the three months to February. Average weekly earnings are forecast to rise by 3.0% y/y in February, which would make it the highest since September 2015 and up from the prior 2.8%. Inflation numbers will follow on Wednesday. After the bigger-than-expected fall to 2.7% in February, the annual rate of CPI is forecast to hold at that level in March. The core rate is expected to inch up though by 0.1 percentage points to 2.5%. On Thursday, retail sales figures will round up the UK data. Retail sales are forecast to decrease by 0.5% month-on-month in March, having jumped by 0.8% in the previous month. 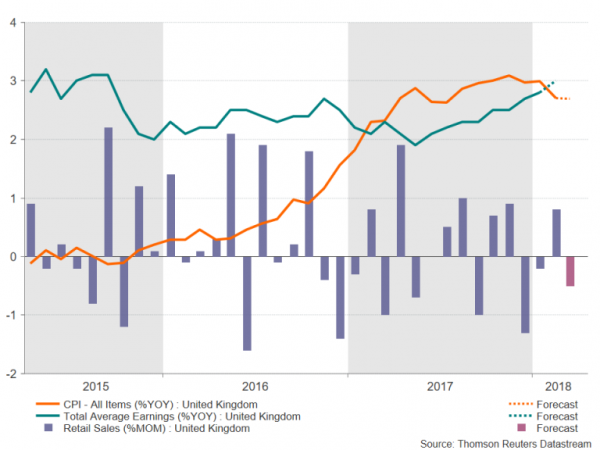 Any big surprises in the data could be significant in swaying the BoE policymakers that are sitting on the fence with regards to voting for a rate hike in May. MPC members have been citing a stronger-than-expected recovery in wages as one of the main reasons for arguing for further tightening in monetary policy this year. Any renewed weakness in wage growth though could lead to reduced odds for a rate hike next month. The pound could face a sharp sell-off should the data disappoint, ending the week-long rally that has driven cable close to $1.43.

US retail sales to show stronger end to quarter

The Federal Reserve pointed out consumption as a weak point in the economy in the first quarter in its March policy meeting minutes published this week. But after three consecutive months of 0.1% m/m declines, retail sales are forecast to have rebounded slightly in March, with sales expected to grow by 0.4% in Monday’s data. A bigger-than-expected increase could help the US dollar target the 108-yen level after this week managing to break out of its recent 106.50-107.50 range.

Other data to watch out of the US next week will include the Empire State manufacturing index for April on Monday, March building permits and housing starts, as well as industrial output on Tuesday, and the Philly Fed manufacturing index for April on Thursday. In addition to the data, several Fed policymakers, whose comments have the capacity to move the dollar, will be making public appearances. The speakers will include Raphael Bostic, William Dudley and Randal Quarles.

Loonie looks to Bank of Canada to extend rally

It will be a crucial week for the Canadian dollar as inflation and retail sales data, along with a Bank of Canada policy meeting could pave the way for a rate hike in May. As the US, Mexico and Canada move closer to a NAFTA deal, it potentially removes a major downside risk to growth for the BoC, shifting the focus firmly back onto data. Inflation came in at a stronger-than-expected 2.2% in February and another positive reading in March on Friday would strengthen the case for an early rate hike. Retail sales, also due on Friday, have been somewhat disappointing in recent months but are forecast to bounce back in February, jumping by 1.1% m/m.

However, the data will be too late for the April policy meeting which takes place on Wednesday. The BoC is expected to keep rates at 1.25% but could hint at a move at its May 30 meeting. Any hike though would be dependent on a preliminary NAFTA deal being agreed before then. The loonie has already rallied to more than 7-week highs on growing optimism of a deal but could be vulnerable to a downside correction should next week’s data disappoint. 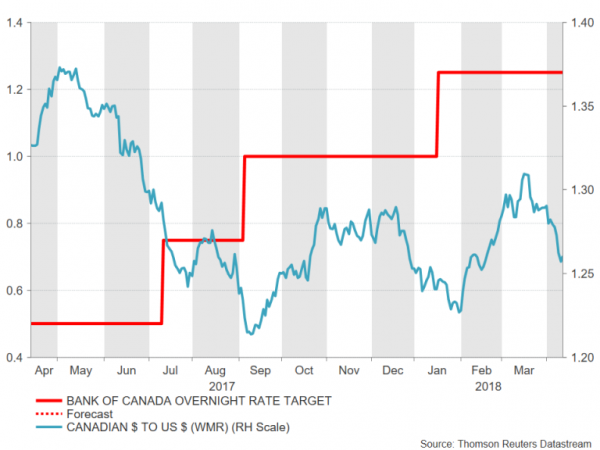