Dollar Pare Gains as Worries on Germany and China Eased

Dollar trades broadly lower today, followed by Swiss Franc and Japanese Yen, as risk aversion eased. News that Germany Chancellor Angela Merkel averted an immediate political crisis is sentiment supporting. But that impact could be mainly confined to Germany or Europe. The more broad based support come from the reversal in Chinese stocks. That came after comments from PBoC Governor Yi Gang around the Chinese Yuan, which is seen by some as a sign that the government is ready for intervention. Australian Dollar is trading as the strongest one for today, followed by New Zealand Dollar, Sterling and then Canadian Dollar.

Technically, outlook is generally unchanged though, EUR/USD and GBP/USD remain in tight range above 1.1507/1.3048 respectively. More consolidations would be seen. USD/JPY should have made a temporary top already and some consolidations should be seen first. AUD/USD failed to sustain below 0.7328 key cluster support. But upside is limited below 0.7408 minor resistance so far, maintaining near term bearish outlook.

The Shanghai SSE composite dropped to as low as 2722.45 earlier today but closed up 0.41% at 2786.88. The decline in the past three weeks has been steep, after the index gapped down 3000 psychological level. The government showed no intention of intervention. But it’s now very close to 2016 low at 2638.30. Based on increasing rhetorics from officials, on Yuan and stocks, the government could be ready to step in.

China’s Central Bank, PBoC, issued a statement in its website regarding Governor Yi Gang’s response to China Securities Journal regarding recent decline in the Yuan. Yi acknowledged the fluctuation in the exchange rate and said the central bank is “pay closing attention”. He attributed to the decline of Chinese Yuan to strength of the US Dollar, external uncertainties and some procyclical behaviors.

He also noted that the “managed floating exchange rate system” is based on market supply and demand. And “practice over the years has proven that this system must be effective and must be adhered to”. At the same time, China is committed to deepen the reform of exchange rate marketization and use sufficient policy tools to ” maintain the basic stability of the RMB exchange rate at a reasonable and balanced level.”

Suggested reading, our report Has China Given Green light to Renminbi Selloff?

Euro and German DAX are relieved today. DAX leads European stocks higher and is trading up 1.43% at the time of writing. CAC is up 1.03% while FTSE is up 0.77%. Sentiments are lifted by news that Chancellor Angela Merkel made a last minute deal with the rebellious Interior Minister Horst Seehofer in immigration. That came after five hours of talks between the leader of Christian Democrats and Christian Social Union. European Commission President Jean-Claude Juncker also acknowledge the deal as he said “I have not studied it in detail but at first glance, and I have asked the legal services to look at it, it seems to me to be in line with the law.” Merkel should have finally averted a political crisis for the near term.

BoE Saunders: Rates may need to go up a little faster

BoE policymaker Michael Saunders warned the markets that their the central bank’s tightening path could be faster then they expected. Saunders is known hawk that started voting for a hike since March meeting. He refers to market pricing of a little bit more than one hike over the next twelve months, and said “if the economy plays out as I expect, it may be that rates need to go up a little faster than that.”

He also laid out his expectations for the developments in UK. On the condition that “Brexit unfolding in sort of a smooth and gradual way”, “the economy will continue to grow at around the pace we have seen over the last couple of years … (I) expect the jobless rate to fall a little further; and pay growth will pick up a bit.”

Against that background, Saunders believed that “rates might need to rise a little faster”. Still he emphasized that “the general picture is still limited and gradual, not too far and not too fast.”

UK Prime Minister Theresa May will meet with senior ministers this Friday, with an effort to resolve all differences regarding Brexit. May would also want to conclude another “white paper” on the issue. Her spokesman said “the PM looked forward to the full discussion which will take place at Chequers on Friday when decisions will be taken on the future partnership the UK is seeking with the EU and the content of the upcoming white paper.”

Chancellor of Exchequer Philip Hammond also said “on Friday the cabinet will meet to set out our way forward in our negotiations with the European Union. We recognize that this is now urgent and that we need to make progress.”

UK PMI construction rose to 53.1 in June, up from 52.5 and beat expectation of 52.0. Markit noted in the release that house building remains best performing area of activity. Also, new orders rise at fastest pace since May 2017 and input cost inflation accelerates in the month.

Tim Moore, Associate Director at IHS Markit, said in the release that it marked “three months of sustained recovery from the snow-related disruption seen back in March” And, ” Survey respondents suggested that improved opportunities for industrial and distribution work were the main bright spots, which helped to offset some of the slowdown in retail and office development.” Meanwhile, “higher transportation costs and rising prices for steel-related inputs led to the fastest increase in cost burdens across the construction sector since September 2017”

RBA left the cash rate unchanged at 1.50% for a 21st meeting in July. The outcome had been widely anticipated. Indeed, the market has expected no interest rate adjustment at least until late 2019. As a result, market reaction outcome was rather muted. The monetary policy stance was merely a repeat of the previous meetings, signaling that keeping the policy rate unchanged is consistent “with sustainable growth in the economy and achieving the inflation target over time”. More in RBA Left Cash Rate Unchanged at 1.5%, Content with Aussie Depreciation

Also from Australia, building approvals dropped -3.2% mom in May versus expectation of -1.0% mom.

A temporary top is in place at 111.31 with 4 hour MACD crossed below signal line. Intraday bias is turned neutral first with focus on 110.55 minor support. The overall outlook remains unchanged that , the corrective pattern from 111.39 could then extend with another down leg. On the downside, break of 110.55 minor support will turn bias to the downside for 109.36 support first. Break will target 108.10 support to extend that consolidation. On the upside, above 111.13 will bring retest of 111.39 high. Break there will also resume the rise from 104.62 and target 114.73 key resistance. 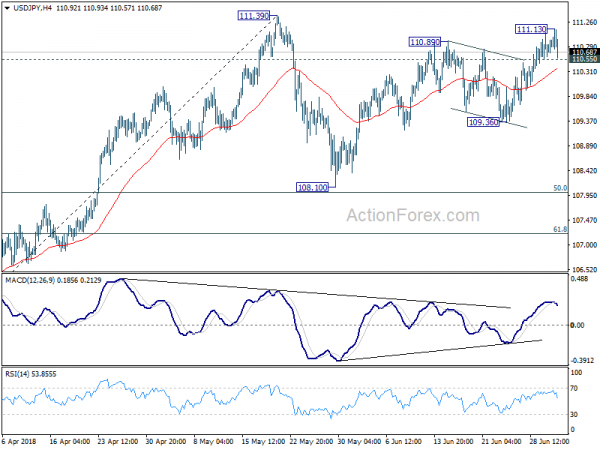 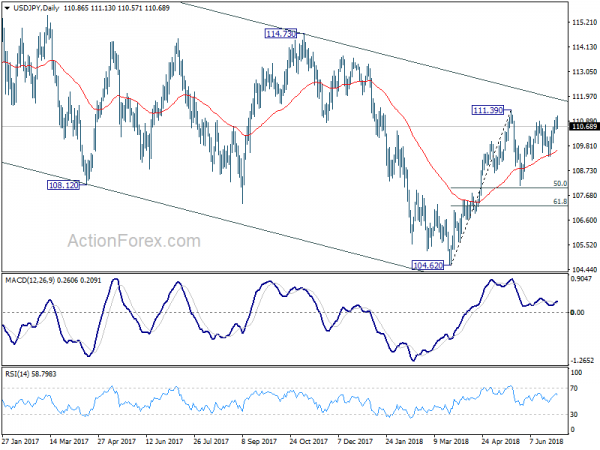