Australia Dollar recovers broadly today as markets cheered Scott Morrison’s win in the Liberal Party’s leadership challenge. But upside is so far limited. New Zealand Dollar is trading as the second strongest one for today so far, followed by Dollar. On the other hand, Yen is under broad based pressure, together with Canadian Dollar.

In other markets, Asian stocks are mixed with Nikkei trading up 0.71% after data showed CPI stalled in July. Hong Kong HSI, China SSE and Singapore Strait Times are all down, -0.69%, -0.35% and -0.62% respective. Gold continues to gyrate lower towards 1180.

Fed chair Jerome Powell’s speech at the Jackson Hole symposium will catch a lot of attention. We’re not expecting anything drastic from there, given Powell’s composed and balanced personality. Also, Fed is pretty much on auto-pilot now regarding monetary policies. There are two areas that might still trigger market volatility. That is, will there be early end of balance sheet reduction? And, will Fed return to pre-crisis channel system? More in Jackson Hole Symposium Preview: Two Questions on Fed’s Monetary Policy

Technically, GBP/USD’s break of 1.2811 minor support overnight indicates completion of rebound from 1.2661. Further decline is now in favor to retest this 1.2661 low. The Pound will be a focus today as EUR/GBP is set to test 0.9030 resistance while GBP/CHF will test 1.2589 support. USD/JPY’s break of 111.42 indicates near term reversal and we’d likely see further upside ahead. USD/CAD also defended medium term channel support and could be heading back to 1.3173 resistance.

ScoMo, as Morrison has come to be known, is seen as the most market-friendly option. In particular, as under him as Treasurer, there was substantial improvement in budget balance in Australia.

However, the rebound is limited as the markets are probably looking through to next year’s general election already. Bigger uncertainty lies ahead as there is a good chance of a Labor win while results in a change of government and policy directions.

RBNZ Orr: New Zealand fundamentals strong but biggest challenge is to get inflation to rise

RBNZ Governor Adrian Orr said in a Bloomberg interview at Jackson Hole that the economy is well supported with a “very supportive exchange rate” and “strong terms of trade”. The fundamentals for New Zealand are strong with “stable monetary policy”, “low inflation”, “very good fiscal account”, “accommodative exchange rate” and it’s a “very positive story”. But the country has come a period of strong population growth which is easing, therefore, the focus is shifted from “consumption” to “earning.

The “biggest challenge” is to “get inflation to rise” as it’s below mid-point of 1-3% target for a couple of years. To do that, Orr reiterated that RBNZ will hold interest rate low for a long period of time and it’s “in no rush to raise interest rate”. And, Orr also emphasized that “we don’t rule out a cut” if necessary.

According to Orr, trade war will have to be very real and vicious before having an impact on New Zealand significantly. And, trade income will have to fall quite considerably before affecting the country’s term of trade.

Canadian Trudeau: We work on a good NAFTA deal, not just any deal

The bilateral NAFTA talks between the US and Mexico continued to drag on. Mexican Economy Minister Ildefonso Guajardo said in Washington yesterday that “we’re on a path that can take us into the weekend and next week.” And, “we are well advanced (but) not there yet.” Guajardo also said “we need to get an engagement with Canada and the only way that can happen is if we continue through the weekend and into next week.”

Separately, Canadian Prime Minister Justin Trudeau said in British Columbia the “we are encouraged by the optimism expressed by the U.S. and Mexico”. But he emphasized that “we will only sign a good deal for Canadians.” And, “we’re working to achieve a good deal, not just any deal.”

Foreign Minister Chrystia Freeland added, “in order to get to the ultimate goal that we all share of modernizing and updating Nafta, obviously it’s important to resolve the bilateral issues.” And, “our plan is then ultimately to move on to the trilateral issues.”

The low-level trade talks between delegation led by US Treasury Under Secretary David Malpass and Chinese Commerce Vice Minister Wang Shouwen ended without any progress.

White House spokesperson Lindsay Walters said in an email statement that “we concluded two days of discussions with counterparts from China and exchanged views on how to achieve fairness, balance, and reciprocity in the economic relationship.”

The Chinese Ministry of Commerce said in a brief statement that both sides conducted “constructive and frank exchanges” and “will maintain contact for the next step.”

A fresh round of tariffs on USD 16B of goods of both sides kicked in yesterday and trade war between US and China continued.

New Zealand trade deficit narrowed to NZD -143m in July, better than expectation of NZD -400m. Japan national CPI core was unchanged at 0.80% yoy in July, below expectation of 0.9% yoy. Germany will release Q2 GDP final. UK will release BBA mortgage approvals. Later in the day US durable goods orders will be featured.

AUD/USD recovers notably after dipping to 0.7237. But still intraday bias stays on the downside with 0.7302 minor resistance intact. Corrective rise from 0.7201 should have completed at 0.7381. Deeper fall is expected to 0.7201 low first. Firm break there will resume larger down trend from 0.8135. In that case, 0.7158 medium term support will be the next target. On the upside, above 0.7302 minor resistance will turn intraday bias neutral first. And, even in case that correction from 0.7201 extends with another rise, we’d expect upside to be limited by 0.7452 resistance to bring larger down trend resumption eventually. 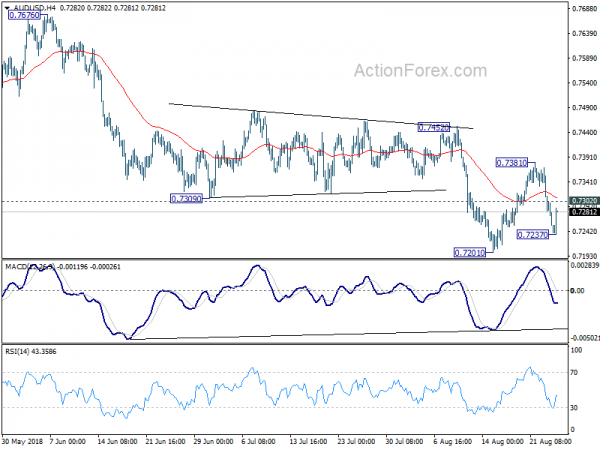 In the bigger picture, rebound from 0.6826 (2016 low) is seen as a corrective move that should be completed at 0.8135. Fall from there would extend to have a test on 0.6826. There is prospect of resuming long term down trend from 1.1079 (2011 high). But we’ll look at downside momentum to assess at a later stage. On the upside, break of 0.7452 resistance, however, will indicate medium term bottoming, on bullish convergence condition in daily MACD. In that case, a correction should be seen first, with stronger rebound would be seen to 38.2% retracement of 0.8135 to 0.7201 at 0.7558. The down trend from 0.8135 will resume after the correction completes. 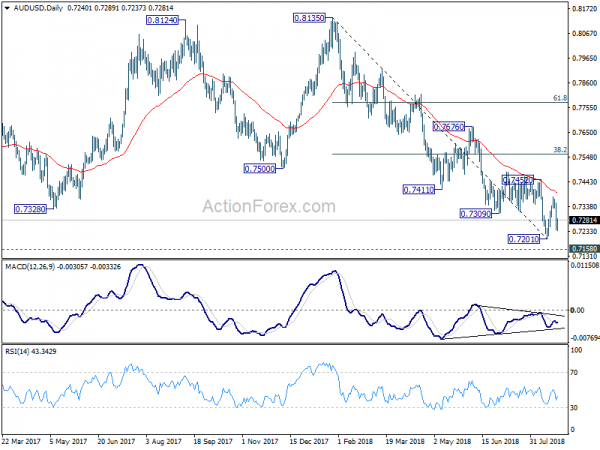