Sterling’s selloff accelerates today and Brexit optimistic faded. The Pound was lifted by EU chief Brexit negotiator Michel Barnier’s offer of an unprecedented relationship last week. It’s now single-handedly hammered by Barnier too as he blasted UK’s Brexit plan. Adding further pressure to the Sterling, UK PMI manufacturing dropped to 25-month low in August. More data risks are lining up ahead including construction and services PMI. Canadian Dollar follows as the second weakest because even though trade negotiation with US will resume this week, there is no sign of a conclusion. Resilience in oil price, with WTI continuing to press 70, is ignored by the Loonie.

On the other hand, Australian Dollar trades broadly higher, ahead of tomorrow’s RBA rate decision. There is absolutely no chance for RBA to adjust interest rate. And the central bank is expected to reiterate its stance that interest rate will stay low for a while as pick-up in inflation and wage growth will be gradual. Euro follows as the second strongest one for today. Turkish central bank CBRT said it will adjust its monetary stance in September meeting given the “significant risks” to price stability. Some volatility is seen in USD/TRY but there is hardly any direction as sideway trading continues. A risk on Lira, and Euro, is that CBRT is now setting itself up to disappoint the markets.

In other markets, European stocks are mixed at the time of writing. FTSE continues it’s inverse relationship with the Pound and is up 0.92%. CAC opened lower and turned positive to up 0.04%. DAX, on the other hand, stays in red, down -0.37%. Earlier today, all major Asian indices declined. Nikkei closed down -0.69%, Hong Kong HSI down -0.63%, China Shanghai SSE down -0.17%. Singapore Strait Times down -0.20%. WTI crude oil is back above 70 but it’s uncertain which this level can be kept. Gold continues to hover around 1200.

Technically, EUR/GBP’s rebound accelerates as it drew strong support from near term rising channel. Outlook in the cross remains bullish and a retest and then break of 0.9097 resistance should be seen in near term. A focus in US session, where US and Canada are on bank holiday), is on 1.2844 minor support in GBP/USD. Break there will confirm recent rebound from 1.2661 and deeper fall would be seen back to retest this low. Similarly, Break of 142.81 in GBP/JPY will indicate completion of rebound from 139.88 and bring retest of this low next.

UK PMI manufacturing dropped to 25-month low, no support to economy in Q3

UK PMI manufacturing dropped to 52.8 in August, down from 53.8 and missed expectation of 53.9. That’s also the lowest level in 25 months. Markit noted that job creation slowed to “near-stagnation” and business optimism dipped to 22-month low.

Rob Dobson, Director at IHS Markit, said in the release that “performance of the UK manufacturing sector looked increasingly lacklustre.” And the result is “broadly consistent with zero growth in manufacturing production”. That is, “the sector will likely fail to provide any support to the wider UK economy in the third quarter. Besides, “optimism about the outlook for the year ahead has been receding in recent months and is now at a 22-month low.” “Manufacturers are also expressing rising concerns about the uncertain backdrop of Brexit.”

Over the weekend, EU chief Brexit negotiator Michel Barnier blasted UK Prime Minister Theresa May’s Chequers plan. And, Barnier “strongly opposed” May’s proposals. On the customs proposals, Barnier said its “not practical”. He added, “it is impossible to tell exactly where a product ends up, on the UK market or in the internal market.” And, “the British proposal would be an invitation to fraud if implemented.”

He also criticized that the “common rulebook” idea as outdated with modern world of trade. He said “the interest of Europeans is to preserve the integrity of the common market. That is our special strength and the reason why we are respected throughout the world, even in the United States.” He added “we have a coherent market for goods, services, capital and people – our own ecosystem that has grown over decades. You cannot play with it by picking pieces.” Therefore, the EU must prevent unfair competition if the United Kingdom has weaker legal requirements than we do. Otherwise we would discriminate and weaken our own companies.”

On the other hand, a UK government spokeswoman defended that the proposal is “precise, pragmatic and that will work for the UK and the EU.” And, “this proposal achieves a new balance of rights and obligations that fulfils our joint ambition to establish a deep and special partnership once the UK has left the EU while preserving the constitutional integrity of the UK. There is no other proposal that does that.

Chris Williamson, Chief Business Economist at IHS Markit noted in the release that, “prospects dimmed further as growth of new orders hit a two-year low and worries about the outlook deepened.” The slowdown in exports can be attributed to the appreciation of the euro since earlier in the year”. But risk aversion was intensifying too. “Worries about trade wars and the damaging impact of tariffs, as well as Brexit and other political worries, all contributed to a dampening of business optimism about the year ahead. ”

Japan PMI manufacturing was finalized at 52.5 in August, unrevised, up from July’s 52.3. Markit noted in the released that “production rises amid faster new order growth”, “export orders fall for second time in three months”, and “geopolitical risks weigh on business sentiment”.

Joe Hayes, Economist at IHS Markit, noted that the “goods-producing sector continued to record growth at the midway point in Q3”. That extended the current stretch of expansion to two years – the “longest since the global financial crisis”. But he also pointed out that “upturn in demand was domestic-led,” with “export sales falling over the month.” And, “potential escalations in trade conflict also contributed to a softening of business confidence.”

However, the so called softening business confidence was not quite reflected in other data. Japan capital spending has increased 12.8% in Q2, nearly double of expectation of 6.6% and almost four times of prior quarter’s 3.4%.

Australian Dollar weakened in early Asian session after mixed economic data. But Aussie quickly recovered, partly helped by oversold conditions. On the negative side, retails sales rose 0.0% mom in July, below expectation of 0.3% mom. There were falls in three of the six industries, including household goods retailing (-1.2%), clothing, footwear and personal accessory retailing (-2.0%) and department stores (-1.9%). The declines were offset by other retailing (1.7%), food (0.3%) and cafes, restaurants and takeaway food services (0.6%)”. Also, ANZ job advertisements dropped -0.6% mom in August. That could point to easing momentum in job growth.

On the positive side, AiG Performance of Manufacturing Index rose 4.7 pts to 56.7 in August, indicating faster growth across the manufacturing sector. In particular, exports sub-index has jumped 8.5 points to 58.4 points. However, drought conditions in New South Wales and Queensland are now having an adverse impact on input costs and sales for some manufacturers. Company operating profits rose 2.0% qoq in Q2. TD securities inflation rose 0.1% mom in August.

China Caixin PMI manufacturing dropped -0.2 to 50.6 in August, missed expectation of 50.7. In the release, it’s noted that “output expands at faster pace… but new order growth weakens and employment continues to decline”. Also, confidence towards the 12-month business outlook remains lacklustre”. Also it’s the third straight month of decline and the lowest level since June 2017.

Dr. Zhengsheng Zhong, Director of Macroeconomic Analysis at CEBM Group noted that “the manufacturing sector continued to weaken amid soft demand, even though the supply side was still stable”. Also, “worsening employment situation is likely to have an impact on consumption growth.” He warned that “China’s economy is now facing relatively obvious downward pressure.”

GBP/USD’s fall from 1.3042 accelerates to as low as 1.2854 so far and focus in on 1.2844 minor support. Firm break there will confirm completion of the corrective rebound from 1.2661. In such case, deeper fall should be seen to retest 1.2661. Decisive break there will resume larger down trend from 1.4376. On the upside, above 1.3042 will bring another rise. But upside should be limited by 1.3316 fibonacci level to bring near term reversal. 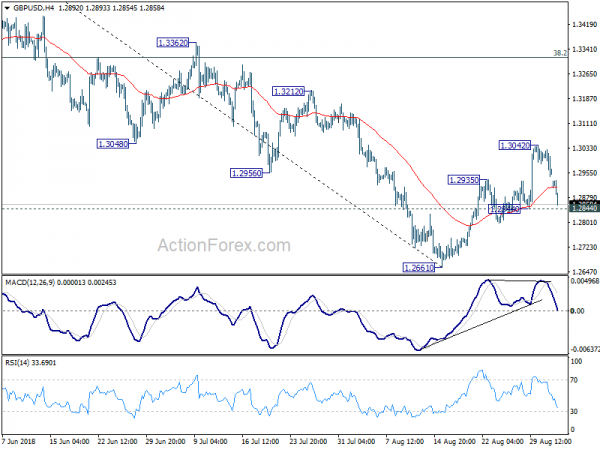 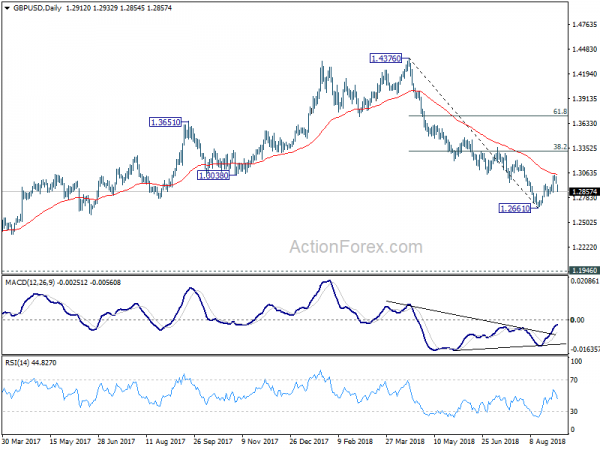 ECB Lagarde urges Europe not to get fixated with coronabonds

Euro Trading A Tad Higher In The Morning Session