Dollar has been relatively today and risks of escalation in trade war diminished. Deeper selling is seen after inflation data showed larger than expected fall in core CPI in August. Though, the greenback is currently underperformed by Yen due to easing risk aversion. In addition to trade optimism, Turkish central bank also delivered the anticipated rate hike, which helps lift the Lira by more than 2%. Talking about central banks, both BoE and ECB stand pat today and their decisions are widely expected.

On the other hand, Australian Dollar continues to be the biggest winner today, as additionally supported by strong job data. Euro followed as the second strongest.

Technically, we could Dollar and Yen extending this week’s decline further in US session. In particular, EUR/USD will likely take on 1.1733 resistance while USD/CHF will take on 0.9640 support. EUR/JPY breaks 129.97 minor resistance and should now be heading to 130.86 and above. USD/JPY, however, is staying in range and show no intention of a breakout.

ECB kept main refinancing rate unchanged at 0.00% as widely expected. The marginal lending facility and the deposit facility are kept at 0.25% and -0.40% respectively. ECB also maintained forward guidance that “the Governing Council expects the key ECB interest rates to remain at their present levels at least through the summer of 2019”. Also, starting October, monthly asset purchase will be halved to EUR 15B, and end after December. ECB also said it intends to reinvest the principal payments “for an extended period of time”.

BoE kept bank rate unchanged at 0.75% as widely expected. Asset purchase target was also unchanged at GBP 435B. Both were made by unanimous decision. The central bank maintained tightening bias and said “an ongoing tightening of monetary policy over the forecast period would be appropriate to return inflation sustainably to the 2% target at a conventional horizon.” But it also reiterated that the projections were conditioned on the expectation of a smooth Brexit.

BoE noted that economic projections as presented in the August Inflation Report “appear to be broadly on track”. Downside risk to global economy increased “to some degree”. Growth has softened and financial conditions tightened in emerging markets, “in some cases markedly”. Further protectionist measures by the US and China could a larger negative impact than expected. Domestically, economic outlook could be influenced by Brexit process and responses from households, business and markets. BOE noted that there were indications of “greater uncertainty” regarding Brexit.

What a volatile day for the Turkish Lira. It originally plunged on President Tayyip Erdogan’s comments against interest rate. But then CBRT announce to raise policy rate (one week repo auction rate) from 17.75% to 24%. USDTRY drops more than -3% after the release and is now set to take on 6.000 handle. Last month’s low at 5.7000 suddenly looks within reach.

CBRT said in the statement that “recent developments regarding the inflation outlook point to significant risks to price stability.” Further, “deterioration in the pricing behavior continues to pose upside risks on the inflation outlook”. Thus, “, the Committee has decided to implement a strong monetary tightening to support price stability.” Also, “other factors affecting inflation will be closely monitored and, if needed, further monetary tightening will be delivered.”

Chinese Foreign Ministry spokesman Geng Shuang said at a regular press briefing that it received the invitation from the US for restarting trade talks. And the countries are now in discussion about the details. Geng said that “China has always held that an escalation of the trade conflict is not in anyone’s interests. In fact, from last month’s preliminary talks in Washington, the two sides’ trade talk teams have maintained various forms of contact, and held discussions on the concerns of each side.”

Ministry of Commerce spokesman Gao Feng also said the two side are discussing details for future talks. And, he added that trade escalation is not in interest of either country. But he also emphasized that trade deficit with US is due to its low saving and control on export to China. He hoped that US will not find excuses for trade protectionism and urged it to comply with WTO rules.

William Zarit, Chairman of AmCham China said “the White House has threatened to fire the next barrage of tariffs at $200 billion more Chinese goods, expecting with this onslaught, or subsequent ones, China will wave a white flag. But that scenario risks underestimating China’s capability to continue meeting fire with fire.”

Eric Zheng, Chairman of AmCham Shanghai warned that “tariffs are already negatively impacting U.S. companies and the imposition of a proposed $200 billion tranche will bring a lot more pain”. And “if almost a half of American companies anticipate a strong negative impact from the next round of U.S. tariffs, then the U.S. administration will be hurting the companies it should be helping.”

The survey was conducted between August 29 and September 5, 2018. Over 430 companies responded.

European Union Chamber of Commerce in China, also carried out a survey regarding US-China tariff war. Results showed that 53.9% responding said US tariffs on China affected their company. 42.9% said China tariff on US products affected their company. There is, roughly 11% difference. The Chamber said that “the high rate of negative views on either side of the trade war is emblematic of the degree of interconnectivity in the global economy.” But at the same time 72.5% said they’re taking no action to cope with the trade war, but just monitoring the situation.

Mats Harborn, president of the European Union Chamber of Commerce in China said “the effects of the US-China trade war on European firms in China are significant and overwhelmingly negative.” The Chamber shared the concerns regarding China’s trade and in vestment practices. However, Harborn warned that “continuing along the path of tariff escalation is extremely dangerous”. He added “it threatens to dismantle the entire global, rules-based system at a time when we should be working together to modernise it.”

Overall, the set of data affirmed RBA’s view that spare capacity is gradually being taken out, which is a prelude to meaningful wage growth. However, wages have actually need to show the increase before RBA is convinced that eventually there is enough upward pressure on inflation. Talk of rate hike is premature based on just today’s data.

In Japan, private machinery orders, excluding volatile ones, rose 11.0% yoy in July, well above expectation of 5.8% yoy. Total machinery orders rose 18.8% yoy. The strong growth suggests that companies were keen to invest despite the threat of trade protectionism. And rising capex will likely add to economic growth. So far, trade war worries haven’t materialized in economic data yet. 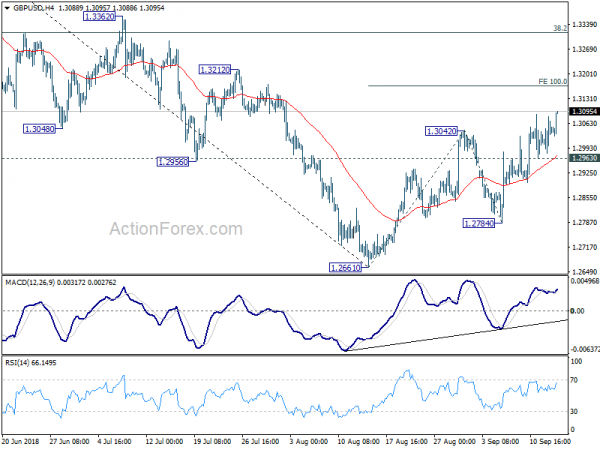 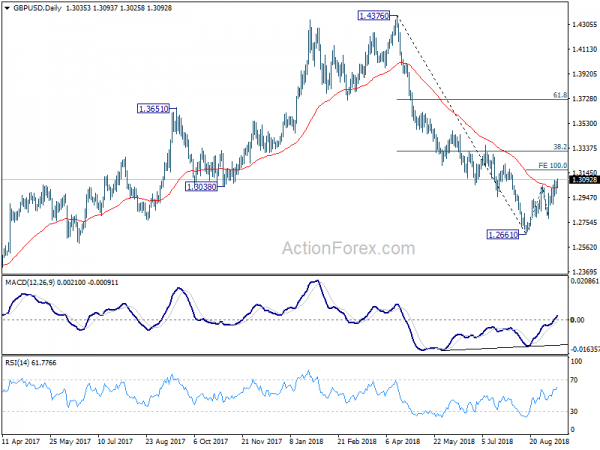