Risk appetite fades today as sentiments are weighed down by a string of weak economic data from Eurozone and US. In short, German retail sales dropped the most in 11 years. Eurozone GDP growth was stuck at 4-year low in Q4. Italy was in technical recession in H2 2018. US initial jobless claims jumped to highest since Sep 2017. Canada GDP contracted in November. Fed’s dovish turn yesterday boosted stocks yesterday. But it’s worth a thought on whether such turn is a positive or negative sign.

In the currency markets, Yen is the strongest for today for the moment, followed by Australian Dollar. Sterling is the worst performing one, followed by Canadian. Dollar is trying to recover as FOMC triggered selloff lost momentum. Trump’s comments on US-China trade talks are positive. But Dollar will probably need to get a rather impressive non-farm payroll report for staging a sustainable rebound.

US initial jobless claims jumped to 253k, highest since Sep 2017

Trump: Working with China on a complete deal, leave nothing unresolved

Trump sounds optimistic again in a serious of tweets regarding trade talk with China. He said the meetings in Washington are “going well with good intent on both sides”. Trump is expected to meet with China’s representatives, including Vice Premier Liu He, in the Oval Office today”.

But he also emphasized that “no final deal will be made until my friend President Xi, and I, meet in the near future to discuss and agree on some of the long standing and more difficult points.” He noted that both sides are trying to do a “complete deal, leaving NOTHING unresolved on the table”.

Canada GDP contracted -0.1% mom in November, matched expectations. Looking at the details, decreases in wholesale trade, finance and insurance, manufacturing and construction more than offset gains in 13 of 20 industrial sectors. Goods-producing industries were down 0.3%, the third decline in four months, while services-producing industries were essentially unchanged.

German retail sales dropped -4.3% mom in December, way below expectation of -0.5% mom. That’s also the fastest decline in 11 years since 2007. The decline was partly due to a strong November with pre-Christmas shopping and one-off discounts. But it’s yet another warning that the growth engine of Eurozone is slowing down quickly. Also from Germany, unemployment rate was unchanged at 5.0% in January. But unemployment dropped less than expected by -2k only.

From France, CPI dropped -0.4% mom in January. Annual rate slowed sharply from 1.6% yoy to 1.2% yoy. INSEE noted that “The fall in inflation should result from a pronounced deceleration in the prices of energy. Services prices should rise at the same pace as in December and those in manufactured products should drop barely less than in the previous month. Contrariwise, food and tobacco prices should gather pace.”

UK Foreign Minister Jeremy Hunt said the government is putting together the new Irish border backstop proposal for the EU. And “it is going to take a few days to do that”.

Hunt added “there is potential along all the different routes that have been discussed. But we need to put those together, make sure they meet the concerns the EU has expressed and then I think… we will have a proper discussion.”

While the March 29 formal Brexit date approaching, Hunt still maintained that it’s too early to say if extension to Article 50 is needed.

BoJ released summary of opinions of January 22/23 monetary policy meeting today. It’s noted there that “hard data suggest that the trend in Japan’s economy has been firm”. However, “some market participants hold excessively pessimistic views.” And, risks to overseas economies have been “increasingly tilted to the downside” and there are concerns that some “may materialize”.

BoJ also noted that recent fall in stocks prices “to a certain extent indicates the anticipation of a global decline in the real economic growth rate.” And, “this is clear from developments in exports and imports, rather than GDP, which is declining marginally.”

The central bank also reiterated the stance to maintain current monetary easing. And more importantly, if downside risks materialize, BoJ “should be prepared to make policy responses”. It’s added that “Since achieving the price stability target has been delayed, it is not desirable to adopt a stance of not taking actions until a serious crisis occurs. Rather, a stance of taking swift, flexible, and decisive actions, including additional easing, in response to changes in the situation is desirable.”

China PMI manufacturing rose 0.1 to 49.5 in January, up from 49.4 and beat expectation of 49.3. It’s, nonetheless, the second month of contractionary reading. It’s noted in the release that the continuous decline since August last year was finally broken, showing signs of stabilization. Slight increase in export orders also suggested that sharp decline export growth since November was slowing down.

However, decline in new orders and backlog orders reflected downward pressure on demand. Overall, “the current economy has signs of stabilization, but the foundation still needs to be consolidated. Also from China PMI non-manufacturing rose to 54.7, up from 53.8, and beat expectation of 53.9. 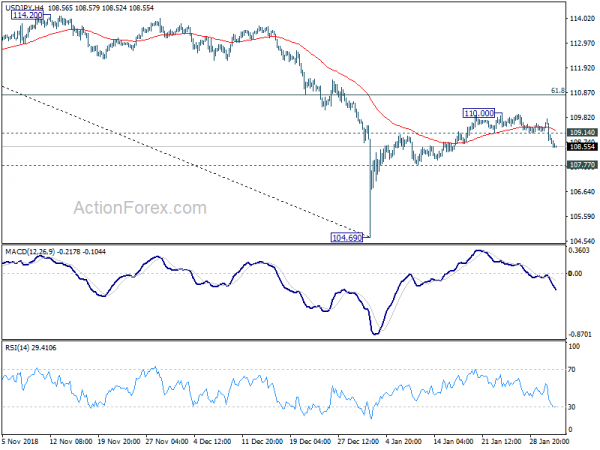 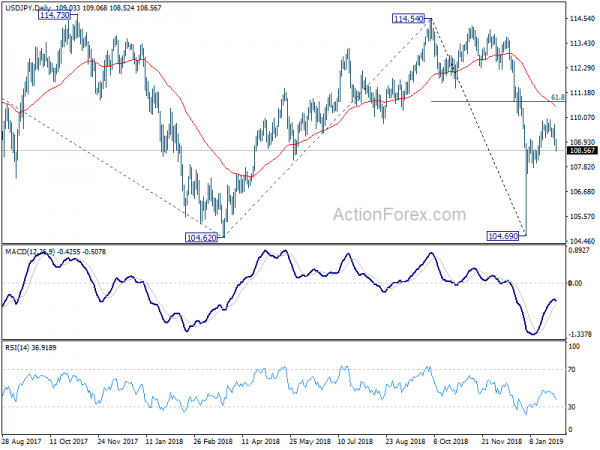