Yen is back under pressure again today as Asian stock markets extend this week’s rally. Stronger than expected Chinese services data is lifting sentiments. Meanwhile, there is somewhat some optimism on US-China trade negotiations, which is restarting in Washington today. International organizations continued to give warnings on global slowdown, including IMF, WTO and Asian Development bank. But their messages are largely ignored by investors.

Staying in the the currency markets, Australian Dollar is the strongest on for today so far, lifted by much stronger than expected retail sales data. At least, relative resilience in consumption could give RBA more time to wait and see before deciding to cut interest rates. New Zealand Dollar follows as the second strongest.

US-China trade negotiation will resume on Wednesday with Chinese Vice-Premier Liu He arriving in Washington. Liu will meet both US Trade Representative Robert Lighthizer and Treasury Secretary Steven Mnuchin.

It’s reported that an agreement is within reach, covering most of the core issues including intellectual property theft and forced technology transfer. But there is so far no news regarding subsidies for state owned enterprises, which create unfair playing fields.

In addition, the real crucial topic of enforcement is unresolved. The US is believed to be demanding to keep current punitive tariffs until China implements what are agreed. But this is at the same time firmly objected by China.

Nevertheless, US Chamber of Commerce head of International Affairs Myron Brilliant sounded optimistic. He said yesterday that “we’re getting to the point where it’s clear that both governments want a deal. The presidents want a deal, and they need to get through the end-game issues. This is a critical week.”

Brilliant added, “ninety per cent of the deal is done, but the last 10 per cent is the hardest part, it’s the trickiest part and it will require trade-offs on both sides.”

Australia retail sales rose 0.8% mom s.a. in February, much higher than expectation of 0.3% mom. ABS Director of Quarterly Economy Wide Surveys, Ben Faulkner said: “There were improved results across most industries with rises in food retailing (0.8%), department stores (3.5%), household goods retailing (1.1%) and clothing, footwear and personal accessory retailing (1.6%). Other retailing (0.0% and cafes, restaurant and takeaway services (0.0% were relatively unchanged. The rise this month follows subdued results in December 2018 (-0.4%) and January 2019 (0.1%).”

RBA has repeatedly noted that household consumption is a key uncertainty for overall GDP. Tightness in labor market has not much been translated into wage growth and rise is household disposable income. Wealth effect of falling house price could also be a drag. But February data does give some positive news to RBA and some room for it to wait-and-see first.

Australia AiG service index rose to 44.8, but all sectors contract

AiG Performance of Service Index rose 0.3pts to 44.8 in March, indicating a “slower rate of contraction. But it’s still the third straight month of contractionary conditions following a positive run through most of 2017 and 2018. Despite the slight improvement, it’s should noted that it’s the first month since August 2010 that all sectors contract.

China Caixin PMI services rose to 54.4 in March, up from 51.1, beat expectation of 52.0. That’s the highest reading in 14 months. PMI composite rose to 52.9, up from 50.7, strongest since June 2018. Markit also noted that Manufacturers and service providers both signal stronger increases in activity and new work. Renewed rise in manufacturing payrolls leads to first expansion of composite employment for over a year. Overall business confidence edges up to seven-month high.

Zhengsheng Zhong, Director of Macroeconomic Analysis at CEBM Group said: “In general, China’s economic fundamentals recovered in March, with domestic and external demand as well as manufacturing employment improving. However, business sentiment has remained cautious, and inflation was subdued. The three-month moving average of the Caixin China General Manufacturing PMI remained in contraction territory, while the Caixin China Composite Output Index showed tentative signs of recovery following a relatively subdued start to 2019. More evidence is needed to determine whether the Chinese economy has stabilized.”

The report warned that risks remained “tilted to the downside”. It said “A drawn-out or deteriorating trade conflict between the People’s Republic of China and the United States could undermine investment and growth in developing Asia. With various uncertainties stemming from US fiscal policy and a possible disorderly Brexit, growth in the advanced economies could turn out slower than expected, undermining the outlook for the People’s Republic of China and other economies in the region. Though abrupt increases in US interest rates appear to have ceased for the time being, policy makers must remain vigilant in these uncertain times.”

IMF Managing Director Christine Lagarde warned yesterday that the global economy is “increasingly unsettled” after two years of good time. She noted that the the economy has “lost further momentum” since the January forecast and hinted at downgrade in the updated forecast next week. Back in January, IMF projected  global growth for 2019 and 2020 at around 3.25%.

Lagarde also said 70% of the global economy will experience a “slowdown” this year. That’s a drastic change from two year ago, when 75% experienced an “upswing”. Though, she still emphasized that “we do not see a recession in the near term”. But there will be pickup in H2 2019 and into 2020.

She outlined three areas of policy actions needed.: (a) Domestic Policies to Build More Resilient and Inclusive Economies; (b) Cross-Border Efforts to Provide a More Level Playing Field; (c) Partnership to Address Global Challenges. In particular, she said tariffs between US and China went up by 25% and “that alone would reduce annual GDP by up to 0.6 percent in the US and by up to 1.5 percent in China.” She urged that “these are potentially self-inflicted wounds that should be avoided.” 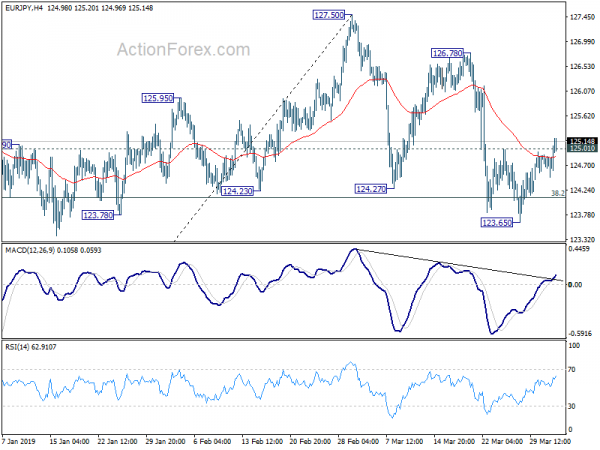 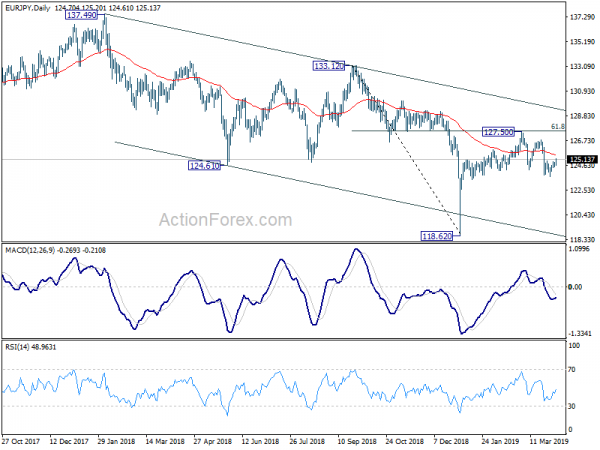