Risk aversion took a breath overnight in the US. But selloff in stock markets intensified again after Trump condemned that China “broke the deal” and pledged “we won’t back down” on tariffs. It’s so far highly doubtful if Chinese Vice Premier Liu He could turn around the situation in his trip to Washington starting today. Asian stocks are all in deep in red for the moment while DOW future is also down -140 pts.

In the currency markets, Yen surges broadly again today and is again the strongest one. Dollar, Euro and Sterling are chasing after the second spot. Australian, New Zealand and Canadian Dollars are the weakest on risk aversion as usual. For the week, Yen is the strongest, followed by Dollar and then Euro. Sterling remains the weakest on Brexit impasse, then Kiwi after RBNZ cut, and then Aussie.

Technically, Yen crosses remain generally weak. This week’s selloff indicates near term bearish reversal in USD/JPY, EUR/JPY and GBP/JPY. And more downside are expected in these crosses in the near term at least. AUD/USD is heading back to 0.6962 temporary low after brief recovery. Break will resume near term down trend from 0.7295. GBP//USD is pressing 1.2987 minor support and break will but an early sign of near term bearish reversal too. EUR/USD, USD/CHF and USD/CAD are range bound, with Dollar in mild upper hand.

Trump vows not to back down on tariffs, China warns of countermeasures

At a rally in Florida late Wednesday, Trump accused that China “broke the deal” as the trade negotiations entered the final stage. And he pledged no to back down on tariffs unless China “stops cheating our workers”. He said, “I just announced that we’ll increase tariffs on China and we won’t back down until China stops cheating our workers and stealing our jobs, and that’s what’s going to happen, otherwise we don’t have to do business with them”.  And, ‘They broke the deal,” he added. “They can’t do that. So they’ll be paying. If we don’t make the deal, nothing wrong with taking in more than $100 billion a year.”

In response to new tariff threats, China’s Ministry of Commerce said in a statement: “Escalating the trade conflict is not in the interest of the people in both countries and the world. China deeply regrets the move. But if the US tariff measures are implemented, China will have to take necessary countermeasures.” Chinese Vice Premier will be in Washington to try to save the trade deal while new round of tariffs will take effect in less than 24 hours.

The National Institute of Economic and Social Research (NIESR) published a report regarding the economic impact of post-Brexit customs union solution for the UK. Comparing with staying with in EU, the customs solution way will means around GBP 800 loss per person per year after 10 years.

The reported noted that “the terms on which the UK will trade with the EU after Brexit will not be as favorable to the UK as they are now”. And, “this would discourage investment in the UK and ultimately mean that UK workers were less productive than they would have been if the UK had stayed in the EU.”

Also, NIESR economist Garry Young said “leaving the EU for a customs union will make it more costly for the UK to trade with a large market on our doorstep, particularly in services which make up 80 percent of our economy.”

RBNZ Orr: Get ahead of the curve with this week’s rate cut

RBNZ Governor Adrian Orr toned down the chance of another rate cut after yesterday’s, as he addressed a parliamentary committee today. He noted that “at the moment we see in the outlook for interest rates as…balanced”. Regarding yesterday’s cut, Orr pointed out that “the reason for the cut is global economic growth has slowed.”  “Growth has come off rapidly in Europe, in China, though that’s stabilized more recently, and Australia … so key trading partners.”

Separately, Orr also told the Morning Report that the cut was “sensible” as our “forward projection [showed] a lower rate. And the question for the committee was “do we wait or do we move now”. Orr said “Moving now is the best choice for us as far as we consider because it means we get ahead of the curve – we aren’t chasing the economy in cycles, we’re actually getting ahead and removing the cycles.”

Kuroda: Bo won’t do anything on exchange-rate, it’s MOF’s job

BoJ Governor Haruhiko Kuroda told parliament today that the biggest factor on markets’ trust in Yen is BoJ’s commitment to price stability. He said “currency rates move on various factors, so it’s hard to judge market trust in the yen by looking at exchange-rate fluctuations alone.” Instead, “confidence in the central bank’s policy is a big factor behind market trust in the country’s currency”.

Kuroda also said BoJ is watching exchange-rate moves carefully. However, currency policy falls under the jurisdiction of the Ministry of Finance. Thus, “BOJ would not do something for exchange-rate stability”.

AUD/USD’s recovery was limited below 0.7069 resistance and reversed. But downside is contained above 0.6962 temporary low. Intraday bias remains neural and outlook stays bearish. On the downside, break of 0.6962 will resume the fall from 0.7295 to 100% projection of 0.7295 to 0.7003 from 0.7205 at 0.6913. Decisive break there will indicate further downside acceleration and pave the way to retest 0.6722 low. However, considering bullish convergence condition in 4 hour MACD, firm break of 0.7069 will indicate near term bottoming and turn bias back to the upside for 0.7205 resistance and above. 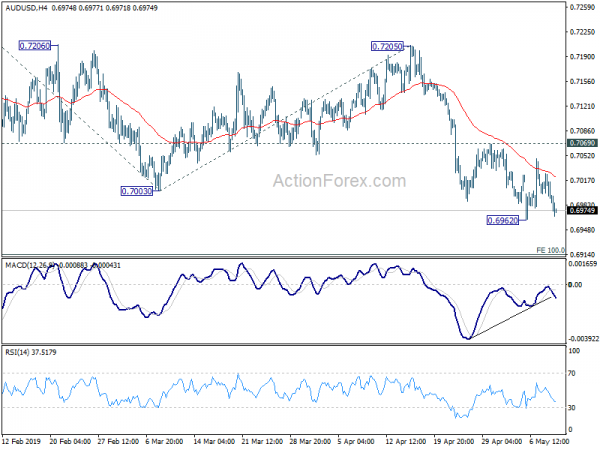 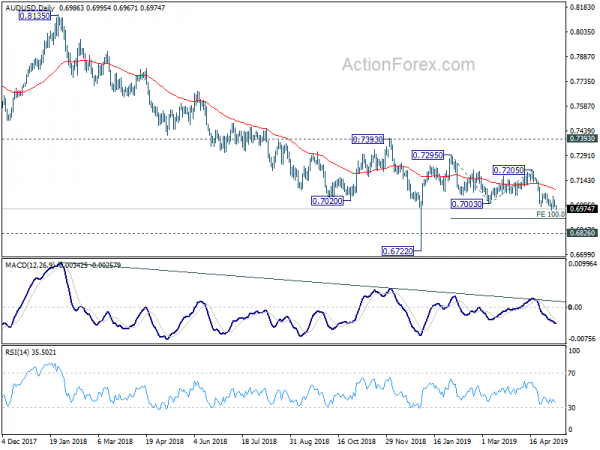