After some initial hesitation, Asian markets picked up some momentum and strengthen broadly, recovering some of this week’s losses. Though, strength is so far limited with lots of uncertainty ahead. It’s a fact that US-China trade war is dragging on for longer despite Trump’s “positive” words. At the same time, April data from China showed that March rebound was just temporary. Slowdown in the economy is still in progress, even before collapse of trade negotiations. With new round of tariffs, it’s not optimistic for China to bottom out soon.

In the currency markets, Australian Dollar is currently the weakest one for today. Weaker wage than expected wage growth in Q1 is another drag on the Aussie. New Zealand Dollar and Yen follow as next weakest. Sterling and Euro are the strongest ones for today, followed by Canadian. The Loonie will need some solid reading from toady’s CPI release to revive recent rebound. For the week, Swiss Franc, Yen and Dollar are the strongest in order. Aussie, Sterling and Kiwi are the weakest.

Technically, as AUD/USD’s decline extends, focus is on 0.6913 fibonacci projection level. Decisive break there, with downside acceleration, will solidify the case for larger down trend resumption. USD/JPY and EUR/JPY staying in consolidation. Focuses will be on 109.02 and 122.48 temporary lows respectively, for indication of fall resumption. USD/CAD will be a pair to watch today. It’s staying in consolidation inside 1.3376/3521. Technically, we’d favor an upside breakout soon.

Nikkei Asia Review reported that China scrapped as much as 30% of the draft trade agreement with US, before the negotiation collapsed. The original 150-page document was reduced to 105 pages. According to unnamed source, Chinese President Xi deemed legally binding parts of the draft text to be tantamount to “an unequal treaty.” And all relevant parts of the inequality were deleted or revised.

On the other hand, Trump tried to tone down the situation and said said “we’re having a squabble with” China only., and “we have a dialogue going. It will always continue.” Treasury spokesman also indicated that Steven Mnuchin will plan for another meeting with China, without details. The spokesman said: “As the secretary has indicated, the negotiations will continue. We do anticipate, as the secretary indicated yesterday, that we will plan for a meeting in China at some point soon.” However, nothing is heard from Trade Representative Robert Lighthizer yet.

Despite the rebound in US stocks overnight, Asian markets are mixed. Upside of recovery was capped by poor data from China. It’s now rather apparent that the rebound in March was just temporary due to seasonal reasons. The slowdown in China is in place and could even worsen further as trade war with US drags on.

More seriously, retail sales growth slowed to 7.2% yoy, down from 8.7% yoy and missed expectation of 7.2% yoy. That’s also the lowest growth since May 2003. That dents hope of shifting the burden of the economy from exports to domestic demand growth. Unemployment rate, though, dropped to 5.2%.

Australian Dollar weakens broadly today and is trading as the worst performing one for today. The Aussie is partly dragged down by poor Chinese data. It’s own data provide no help too.

Wage Price Index rose only 0.5% qoq in Q1, below expectation of 0.6% qoq. ABS Chief Economist Bruce Hockman said: “Annual wages in seasonally adjusted terms grew 2.3 per cent for the third quarter in a row. The main contributors to growth over the quarter were regularly scheduled wage rises in the Health care and social assistance and Education and training industries, as was the case in the previous March quarter.”

Westpac Consumer Sentiment rose 0.3% to 101.3 in May, up from 100.7. Westpac noted that easing bias was delivered by RBA at last week’s meeting, with growth and inflation forecasts lowered to “barely acceptable” levels. More importantly, such forecasts are based on market pricing for a full rate cut for. Westpac maintained that the tensions between strong labor market and weak GDP will be resolved over the next few months. And the case of August RBA cut would become clear.

UK Prime Minister Theresa May laid out her “plan” to complete the Brexit withdrawal agreement by the end of next month. Her spokesman said May is planning to put forward the bill again in the week beginning June 3. And he added “it is imperative we do so then if the UK is to leave the EU before the summer parliamentary recess.”

May’s Cabinet agreed to press head with talk with opposite Labour a meeting. As “Ministers involved in the negotiations set out details of the compromises which the government was prepared to consider in order to consider an agreement which would allow the UK to leave the EU with a deal as soon as possible.” And, “it was agreed that it is imperative to bring forward the Withdrawal Agreement Bill in time for it to receive royal assent by the summer parliamentary recess.”

Eurozone GDP and employment, German GDP will be released in European session. But major focuses will be in the US session. Canada CPI will be a key data to watch to gauge BoC’s rate path. US will release retail sales, industrial production, Empire state manufacturing, NAHB housing index and business inventories.

AUD/USD’s fall continues today and reaches as low as 0.6922 so far today. Intraday bias remains on the downside for 100% projection of 0.7295 to 0.7003 from 0.7205 at 0.6913. Decisive break there will indicate further downside acceleration. Further decline would be seen to retest 0.6722 low. On the upside, above 0.6964 minor resistance will turn intraday bias neutral for consolidations. But recovery should be limited by 0.6988/7069 resistance zone to bring fall resumption. 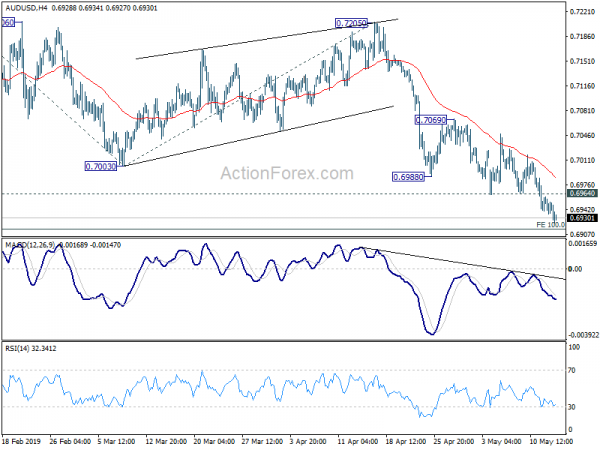 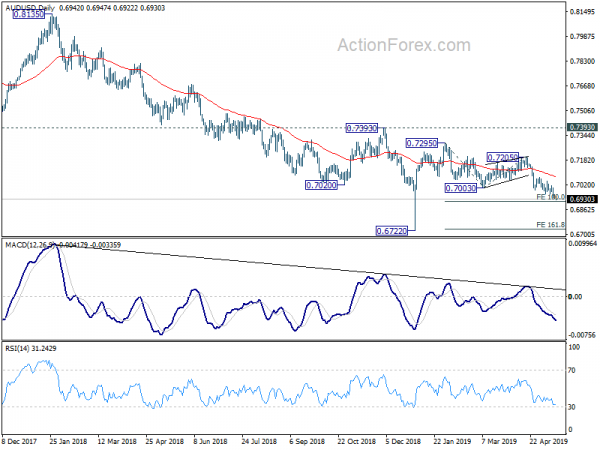