Australian Dollar continues to be the spotlight of the week. It’s knocked down by RBA Governor’s comment that they’s going to consider cutting interest rates in June meeting. It’s actually slightly earlier than market expectations of an August cut. The selloff is more than enough to reverse post election gains Aussie. New Zealand Dollar is following as the second weakest for today.

Risk markets are steady today despite weakness in US stocks overnight, in particular NASDAQ. US announced temporary measures to ease sanctions on China’s Huawei. But there was little optimism among Asian investors. Though, risk aversion is not apparent with Yen and Swiss Franc mixed. For now, Canadian Dollar and US Dollar are the strongest ones for today so far.

Technically, 0.6864 temporary low in AUD/USD is back in focus immediately. Break will resume recent fall from 0.7295 towards 0.6722 low. Similarly, EUR/AUD is looking at 1.6262 temporary top for resuming recent rally. Yen crosses are still staying in consolidation. For now, recoveries in EUR/JPY and GBP/JPY are notably weaker than USD/JPY’s. Sterling is losing some downside momentum against Dollar and Euro. But there is no sign of bottoming in the Pound yet.

Some readings on RBA minutes released today too:

US grants housekeeping temporary exemptions on restrictions on Huawei

The US Commerce Department announced limited exemptions on products of Chinese telecom giant Huawei. The move is seen as for keeping the house in order, so as to prevent internet, computer and cell phone systems from crashing

Under the move, Huawei and its 68 non-US affiliates will be granted 90 days temporary general license to have  limited engagement in transactions involving the export, reexport, and transfer of items.

With the arrangement, “this license will allow operations to continue for existing Huawei mobile phone users and rural broadband networks”. The Commerce Department said it will evaluate whether to extend the exemptions beyond 90 days.

In a speech delivered yesterday, Fed Chair Jerome Powell said that “business debt has clearly reached a level that should give businesses and investors reason to pause and reflect.”  He pointed to corporate borrowing which hit record level of 35% of assets. And, he warned “another sharp increase…could increase vulnerabilities appreciably”.

Though, Powell also emphasized the debt problem is not at the level of systemic threat as the sub-prime mortgage markets. “As of now business debt does not present the kind of elevated risks to the stability of the financial system that would lead to broad harm,” he said.

Responding to some questions, Powell said “today’s inflation dynamics are very different from even 25 years ago. Globalization and technology may be playing a role”. Also, it was premature to make a judgement about the impact trade and tariff issues could have on monetary policy.

In an interview with Handelsblatt published yesterday, St. Louis Fed President James Bullard said t”he wind has completely turned” in Fed’s monetary policy since January. FOMC has approached his view that there should be no more rate hikes for 2019.

Bullard said at this stage of the business cycle, he’d normally expect at least 2% inflation. But core CPI is only 1.6% and “that worries me”. He also noted that “If that persists, I will push the FOMC more to lower interest rates and try to bring inflation expectations down to two percent.”

Regarding the impact of trade war with China on the economy, Bullard said “that depends on how long they last”. “To really hurt the US, the dispute would have to continue for some time,” he added. He also noted the worry is “even bigger” in Asia or Europe. US has “such a large and diversified economy” and hence, the impact as a whole is “relatively small”.

Regarding market pricing of Fed’s rate cut, Atlanta Fed President Raphael Bostic told CNBC that “the market is ahead of where I am”. And, “I would say I’m not expecting a rate cut to be imminent, certainly not by September. Things would need to happen in order for that to play out.”

On inflation, Bostic noted “in general, my view is as long as we don’t see inflation running away, that would the sign that our policy is basically at a neutral level”., And, “we could sustain that for a long time and we don’t have to move.”

On the other hand, Bostic was also unconcerned with downward inflation pressure. He said “I’m not super-concerned about that today, and mainly it’s because when you look at inflation expectations, they haven’t started to trail away in a significant way away from our target”.

Nevertheless, he added, “if I started to see a trend moving away to one and a half or one and a quarter [percent] for inflation expectations, then I’d be concerned. But right now, I don’t see our lack of hitting that target … as being a material failure.”

According to pre-released extract of a speech on Tuesday, UK Chancellor of Exchequer Philip Hammond is set to criticize that advocating for “no deal” Brexit is to “hijack” the result of the Brexit referendum held nearly three years ago.

Hammond will said  there are some “on the populist right” who claim that only leaving without a deal is a “truly legitimate Brexit”. However, “the 2016 Leave campaign was clear that we would leave with a deal”. Thus, “to advocate for ‘no deal’ is to hijack the result of the referendum, and in doing so, knowingly to inflict damage on our economy and our living standards. Because all the preparation in the world will not avoid the consequences of no deal.”

Hammond will also warned that “there is a real risk of a new Prime Minister abandoning the search for a deal, and shifting towards seeking a damaging no-deal exit as a matter of policy … in order to protect an ideological position which ignores the reality of Britain’s economic interests and the value of our Union.”

World Trade Outlook Indicator (WTOI) is unchanged at 96.3 in May, same as February’s reading, which was the lowest level since 2010. The indicator suggests that world trade growth is likely to remain weak into Q2. Also, recent major trade measures announced were not included in the the calculations yet. Thus, outlook would worsen further ahead if  heightened trade tensions are not resolved or if macroeconomic policy fails to adjust to changing circumstances.

WTO also recapped that in the April forecasts, global merchandise trade growth would slowed to 2.6% in 2019, down from 3.0% in 2018. Though, rebound is expected to 3.0% in 2020. However, “there are significant downside risks to the 2019 forecast. Any rebound in 2020 would depend on reduced trade tensions and/or improved macroeconomic performance. ”

BoE’s inflation report hearing will be a focus in European session today. Eurozone will release consumer confidence. US will release existing home sales. 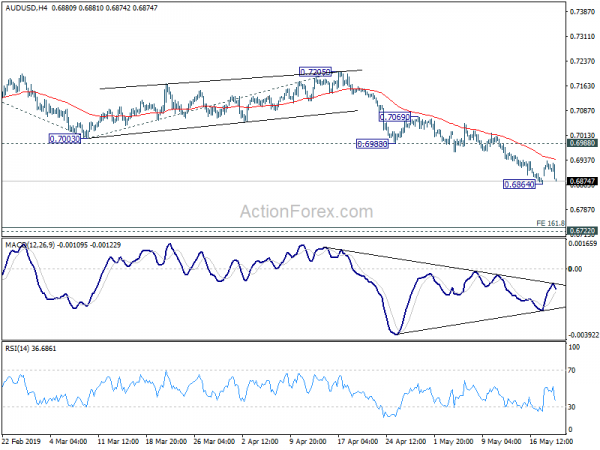 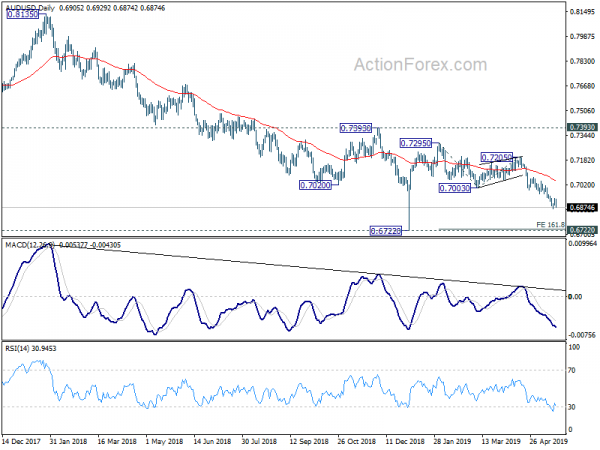