While Dollar has been pressured for most of the day, receding risk aversion seems to be giving in a hand in early US session. The greenback is riding on recovery in both US yield and stocks and trades mildly higher. Adding to that, Chicago Fed President Charles Evans maintains that current interest rate is appropriate. However, St. Louis Fed President James Bullard has come out yesterday and become the first policymaker to call for rate cut already. The greenback will need some more solid economic data to give it sustainable rebound.

Staying in the currency markets, Swiss Franc and Yen are so far the weakest one for today as stock markets recovery, naturally. But it’s rather mixed elsewhere. RBA cut interest rate earlier today and Governor Philip Lowe indicates more are on the table. But Aussie is just mixed. Euro attempted for rally but was capped by slower than expected CPI reading. UK is, for now, the strongest one even though UK PMI construction dropped back to contraction region. The current markets will need some more time to sort out their directions.

Technically, Dollar breached near term support levels against Euro, Aussie and Canadian. But it’s refusing to give up for now and no follow through selling is seen yet. Focus remains on 1.1263 in EUR/USD, 0.6988 in AUD/USD and 1.3429 in USD/CAD.

Chicago Fed President Charles Evans insisted in a CNBC interview that the economy remains solid and interest rate is at the right place. He said “our current setting has been appropriate, but if we sense that there was some greater uncertainty, some softening, we’d have to take that into account and ask, are we getting in the way of the economy.”

While markets are betting on Fed rate cuts this year, Evans said they are “something that I haven’t yet seen in the national data.” In particular, he pointed out that consumption and employment continued to be strong, even though business investment as not as strong as he’d like.

UK PMI construction dropped to 48.6 in May, down from 50.5 and missed expectation of 50.6. That’s also the lowest reading since the snow-related downturn in construction output during March 2018. Additionally, there was the sharpest drop in workforce numbers since November 2012. And commercial work remains the weakest performing category.

Tim Moore, Associate Director at IHS Markit said: “May data reveals another setback for the UK construction sector as output and new orders both declined to the greatest extent since the first quarter of 2018. Survey respondents attributed lower workloads to ongoing political and economic uncertainty, which has led to widespread delays with spending decisions and encouraged risk aversion among clients.”

UK Fox backs Hunt to be PM, dealmaking is part of his DNA

UK Trade Minister Liam Fox said he’s backing Foreign Minister Jeremy Hunt in the race to be the next Prime Minister. He told BBC radio, “in this contest I’ll be backing my friend Jeremy Hunt who is an impressive foreign secretary, an entrepreneur by background, where dealmaking is part of his DNA,”

Fox added, “he understands that we have to message to Europe that we will leave if we cannot get an appropriate deal, but we’ll try to get a deal.” Meanwhile, Fox also warned of “the prospect of a no deal might well be used by those who seek to break up the UK, to use that as a weapon in that particular battle, both I think in Northern Ireland and potentially in Scotland.”

RBA Governor Philip Lowe used a speech to explain today’s rate cut. He emphasized that the decision “is not in response to a deterioration in our economic outlook”. But its to “support employment growth and to provide greater confidence that inflation will be consistent with the medium-term target.”

The timing of today’s cut was due to “accumulation of evidence” of subdued inflation, significant spare capacity in the labor market. And collectively, these factors have contributed to delayed progress in returning inflation to the 2–3 per cent target range.

Meanwhile, RBA board “has not yet made a decision” on whether there will be more interest rate reduction. He noted that current set of forecasts were based on assumptions that “cash rate would follow the path implied by market pricing, which was for the cash rate to be around 1 per cent by the end of the year.” But a range of other possible scenarios and much will depend on how the evidence evolves, especially on the labour market.

On the economy, RBA expects growth to be around 2.75% in 2019 and 2020. Outlook for household consumption is the “main domestic uncertainty, which is “affected by a protracted period of low income growth and declining housing prices”. The central bank noted the tick up in unemployment to 5.2% in April. But the data suggests that “Australian economy can sustain a lower rate of unemployment.” RBA also noted “lower than expected” inflation outcomes which “suggest subdued inflationary pressures across much of the economy”. But inflation is still expected be at 1.75% in 2019 and 2.00% in 2020.

Released in Asian session, Australia retail sales dropped -0.1% mom in April, below expectation of 0.2% mom. Current account deficit narrowed to AUD -2.9B in Q1. New Zealand terms of trade index rose more than expected by 1.0% qoq in Q1. Japan monetary base rose 3.6% yoy in May.

EUR/USD hits as high as 1.2773 today but fails to sustain above 1.1263 resistance for now. Intraday bias remains neutral first. As long as 1.1263 holds, outlook remains bearish. That is, larger down trend from 1.2555 should resume sooner rather than later through 1.1107 low. However, considering bullish convergence condition in daily MACD, firm break of 1.1263 will be an early sign of medium term bottoming. Intraday bias will be turned back to the upside for 1.1448 resistance for confirmation. 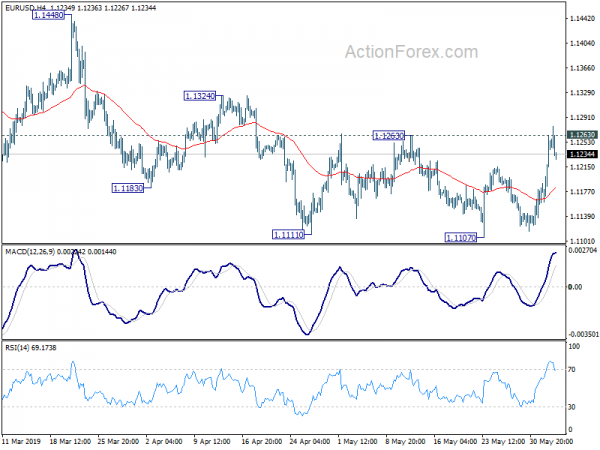 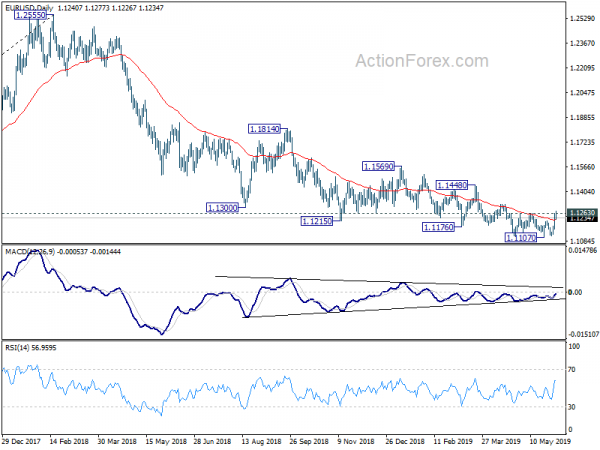