Australian Dollar tumbles broadly today as weak employment data solidifies the case for more RBA rate cut ahead. The headline number might be strong but the details are generally weak. The Aussie is also generally pressured by mild risk aversion in Asian markets. For now, Dollar is following Aussie as the second weakest, then Sterling. On the other hand, Yen is the strongest one, followed by Swiss Franc.

Australia employment rose 42.3k in May, well over expectation of 16.0k. However, the growth was mainly driven by 39.8k addition in part-time jobs. Full-employment rose merely 2.4k. Monthly hours worked in all jobs also decreased by -0.3%. Unemployment rate was steady at 5.2% , above expectation of 5.1%. Participation rate rose 0.1% to 66.0%.

In seasonally adjusted terms, the largest increase in employment was in New South Wales (up 38.5k), followed by Victoria (up 28.6k) and Queensland (up 7.8k). The only decreases were in Western Australia (down -4.0k) and Tasmania (down -0.4k).

The data suggests that there is still considerable slack in the labor market. According to recent comments from RBA Assistant Governor Luci Ellis, unemployment could need to be pushed down to as low as 4.5% before material uplift in wage pressure and inflation. There’s still a long way to go for the central bank, which is on track for more rate cuts this year.

Also from Australia, consumer inflation expectation was unchanged at 3.3% in June.

At a financial forum in Shanghai, Chinese Vice Premier Liu He said there are plenty of policy tools to use to deal with the challenges the economy is facing. He also sounded confidence and said major macroeconomic indicators all remain within reasonable ranges. Meanwhile, China will roll out more strong measures on reforms in the near future.

In the same forum, Pan Gongsheng, head of the State Administration of Foreign Exchange, said the country’s FX market is largely stable with FX reserves steadily rising. And, China is capable and confident of keeping its currency basically stable. Guo Shuqing, head of the China Banking and Insurance Regulatory Commission (CBIRC) reiterated there are plans to further open up its banking securities and insurance sectors.

Separately, the official China Daily said that more money and credit supply adjustment are under way to counter the downside risks of trade war. Measures could include cuts in interest rates or reserve ratio requirements. The newspaper noted the near for stronger measures to maintain liquidity in the financial market and support infrastructure investment

From Japan, BSI manufacturing index dropped to -10.4 in Q2. Tertiary industry index rose 0.8% mom in April versus expectation of 0.4% mom.

UK RICS House Price Balance improved to -10 in May, up from -22. That is, 10% more respondents saw a fall rather than rise in May. This would indicate a deceleration in the pace of price declines in six months time.

Simon Rubinsohn, RICS Chief Economist, said: “Some comfort can be drawn from the results of the latest RICS survey as it suggests that the housing market in aggregate may be steading. However much of the anecdotal insight provided by respondents is still quite cautious, reflecting concerns about both the underlying political and economic climate.”

Opinions are divided as some point out that concerns are mainly on the risks to economic outlook, rather than the outlook. And the risks and uncertainty could turn out to be a lot weaker. Fed’s decision remain data dependent and some strong numbers could push out a possible July rate cut. Meanwhile Fed could resume rate hikes next year should the risks not materialize.

However, the probability of a recession has risen due to trade tensions. The next round of tariffs against China is the “big, big concern”. Some expected recession in second half of 2020 and an insurance rate cut by Fed is seen as not enough in this case. Fed could be forced to start a full blown cutting cycle next year.

SNB rate decision will be a major focus in European session. Sight deposit rate is expected to be held at -0.75%. Libor range to be held at -1.25% to -0.25%. SNB will very likely reiterate the need for negative interest rate policy and readiness to intervene in the currency markets. So, there is little surprise expected from the even. Swiss will also release PPI. Eurozone will release industrial production. Later in the day, US jobless claims and import price will be released. Canada will release new housing price index. 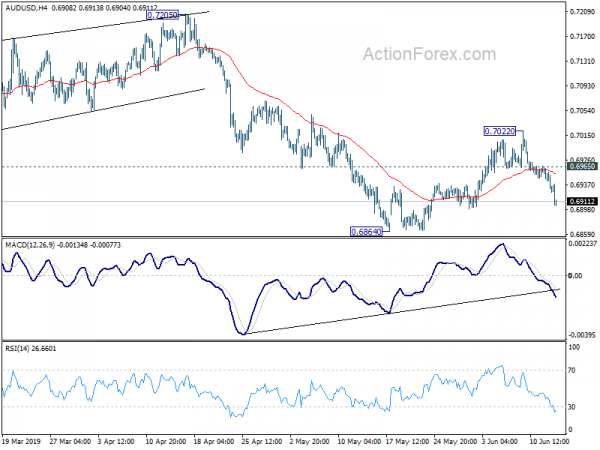 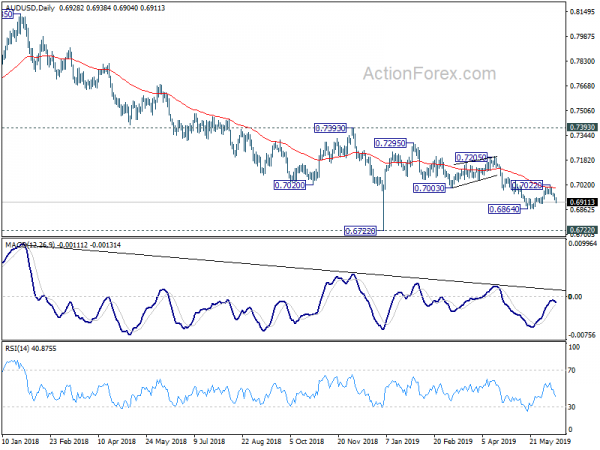