Dollar remains the weakest one for today even though selloff somewhat stabilized in early US session. Stronger than expected core CPI is providing some support to the greenback, together with job data. However, the question remains on whether Fed will deliver the “insurance” rate cut this month, due to continuous uncertainties or deterioration in outlook. Judging from Fed chair Jerome Powell’s comments yesterday, it seems Fed will act on the first cause. Though, it’s still quite a long way to go, with retail sales data next week and Q2 GDP the week after.

Staying in the currency markets, Canadian Dollar is currently the second weakest for today. The lack of selling in USD/CAD through 1.3037 temporary low is a sign of indetermination in CAD bulls. Euro is the third weakest as ECB minutes reaffirmed that it’s ready to act to lift inflation. On the other hand, New Zealand Dollar is the strongest one for now, followed by Sterling.

Technically, 1.3037 in USD/CAD will remain a key focus and firm break there will carry medium term bearish implications. Break of 0.9842 in USD/CHF should indicate completion of recent rebound and align bearish Dollar outlook with other pairs. EUR/GBP and GBP/JPY will be two focuses for the rest of the session with late surge in the Pound. Break of 0.8954 minor support in EUR/GBP will be an early sign of short term reversal in the cross. Deeper fall could then be seen to 0.8872 support next. Break of 136.28 minor resistance in GBP/JPY would bring stronger rebound back towards 137.78 resistance.

Released earlier, German CPI was finalized at 1.6% yoy in June, unrevised. Japan tertiary industry index dropped -0.2% mom in May, below expectation of -0.1% mom. Australia home loans was flat in May, better than expectation of -1.0% mom. Consumer inflation expectations rose slowed to 3.2% in July. UK RICS house price balance improved to -1 in June.

ECB accounts: Broad agreement that update of monetary policy stance was called for

Accounts of the ECB monetary policy meeting in June showed there was “broad agreement” that “update of the monetary policy stance was called for”, due to “prolongation of uncertainties” and the implications for inflation outlook. And inflation was still projected to reach “only 1.6%” in 2021, which was seen to remain “some distance away” from the 2% target. Thus, it’s considered “important” to “demonstration” ECB’s “determination to act”.

Also, there was “broad agreement” on adjusting the calendar based component of the forward guidance to keeping rates at present levels “at least through the first half of 2020”; reiterating the guidance on reinvestment; and thirdly, to set interest rate of TTRO II equal to average MRO rate plus 10bps.

In the Financial Stability Report, BoE warned that “increased Brexit uncertainties have put additional downward pressure on UK forward interest rates and led to a decline in the sterling exchange rate and an underperformance of UK-focused equities.” However, “the UK banking system remains strong enough to continue to lend through the wide range of UK economic and financial shocks that could be associated with Brexit.”

Governor Mark Carney also noted that that material risks of economic disruption remain from no-deal Brexit. And, major financial institutions have done what’s necessary for Brexit. However, he warned that “we can’t fully insulate ourselves from spillovers from Europe where there still are some things to be done.”

Globally, risks to outlook have increased during the first half of the year. BoE said “rising trade tensions have resulted in declining business confidence and pose material downside risks to global output growth.” And, “the impact of these risks would be amplified by continued material underlying vulnerabilities.”

In a regular press conference, China’s Ministry of Commerce Gao Feng urged the US to remove restriction on Huawei and other Chinese companies, to clear the path for healthy and stable development of Sino-US economic and trade relations. He also urged the US to truly implement such commitments

Additionally, he noted that “trade teams from both sides, according to the consensus reached at Osaka by leaders from both countries, will restart economic and trade negotiations on the basis of equality and mutual respect”. Also, “China believes that both sides can find a way to resolve the issue if each other’s reasonable concerns are taken into consideration through a dialogue of equals, he added. 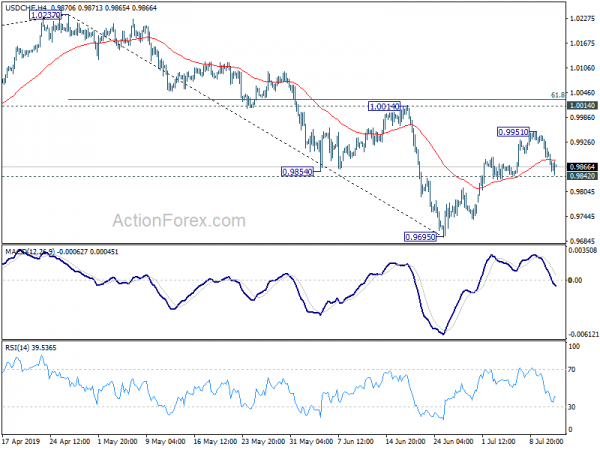 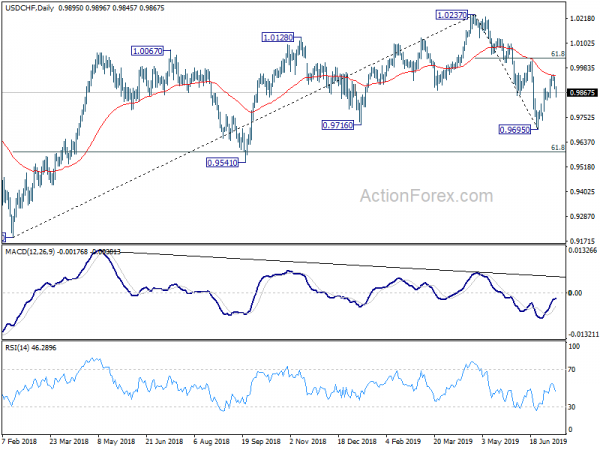