Selloff in Euro picks up momentum again today as Germany yields dive on ECB easing expectations. Swiss Franc is also pressured as SNB could sometime be forced to intervene. Yen is the third weakest, following rebound in stocks rather than falling yields. On the other hand, Sterling recovers broadly, with help from decline in EUR/GBP. Australian Dollar is second strongest, then Canadian.

Technically, USD/CHF’s break of 09797 minor resistance suggests short term bottoming at 0.9659. Further rebound would be seen to 0.9975 resistance. EUR/USD is on track to retest 1.1026 low. USD/CAD appears to have lost momentum ahead of 1.3345 temporary top and more consolidations are likely. While Sterling rebounds, GBP/USD’s kept below 1.2209 resistance, GBP/JPY kept below 130.06 resistance. Both pairs remains bearish for the near term.

German 10-year yield dives again and hit new record low at -0.725%. ECB Governing council member Oilli Rehn is seen as the trigger for the free fall in yields. Rehn hinted that ECB is ready for a “significant and impactful policy package in September”.

There’s speculation that ECB would lower key interest rate by -10bps from the current -0.40%. And, the break of -0.7% level in 10-year bund yield is seen as significant, as could effectively be the new lower bound for ECB deposit rate after the new package.

Released from Eurozone, trade surplus narrowed to EUR 17.9B in June, down from EUR 20.2B and missed expectation of EUR 18.7B.

South Korea, Japan and China to meet next week on trade and tensions

South Korea said that top diplomats of the country, Japan and China are planning to meet in Beijing next week for trade and history tensions.

The meeting will be led by Foreign ministers Kang Kyung-wha of South Korea, Taro Kono of Japan and Wang Yi of China, from Tuesday to Thursday. That would be the first gathering of such kind in three years.

South Korean Foreign ministry said “we expect the meeting will help reinforce the institutionalization and substantiate the foundation of the three-way cooperative scheme.”

RBNZ Orr: We look ahead – not behind

RBNZ Governor Adrian Orr issued a statement to defend the central bank’s decision to the surprised 50bps rate cut earlier this month. That was a response to an opinion piece of BusinessNZ chief executive Kirk Hope titled: ‘Business concerned by blurring of Government and Reserve Bank policy”. Hope criticized that “last week’s OCR cut was less predictable because it did not seem to relate to current inflation or unemployment data.”

Orr explained that the central banks’ decisions are “forward-looking and transparent”. Also, it’s “operationally independent”, with clear mandates and goals. He emphasized policymakers “cannot, and do not, set the OCR based on current or historical inflation and employment outcomes.” And, “we look ahead – not behind”. He added that “global and domestic low inflation expectations sit as a key reason for lower global and domestic official interest rates.”

New Zealand BusinessNZ Performance of Manufacturing Index (PMI) dropped -2.9 pts to 48.2 in July. That’s the first contraction reading in 82 months and the lowest reading since August 2012.

BusinessNZ’s executive director for manufacturing Catherine Beard said that concerns around the direction of activity over the last six months has inevitably led to the sector falling into decline. BNZ Senior Economist, Craig Ebert said that “while July’s result is no dead-set that the economy at large is contracting, the shrinkage is certainly something to take note of”.

EUR/USD’s fall from 1.1249 is still in progress. Intraday bias remains on the downside for 1.1206 low. Decisive break there will extend the downtrend from 1.2555. On the downside, above 1.1130 minor resistance will turn intraday bias back to the upside to extend the corrective. But in that case, we’d expect strong resistance from 1.1282 to limit upside. 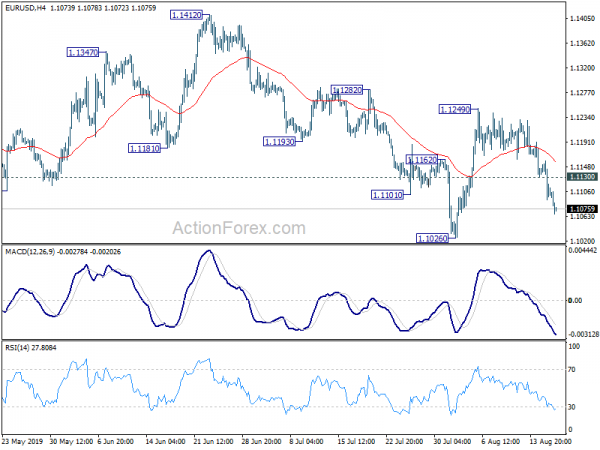 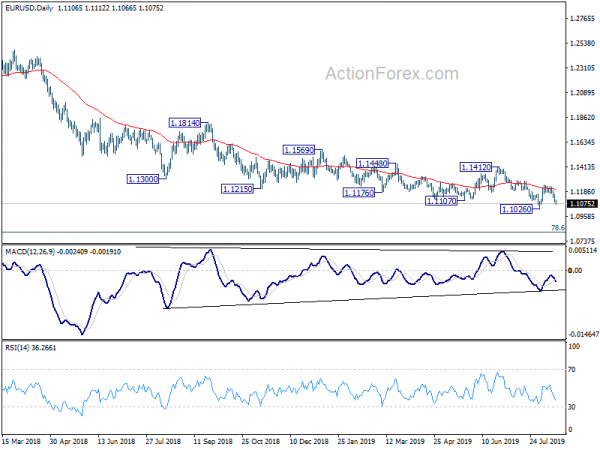