Markets Remains Risk On as Focus Turns to Non-Farm Payrolls

The financial markets remain in risk on mode today. Yen, Swiss Franc and Dollar continue to feel tremendous selling pressure. Meanwhile, commodity currencies are generally the strongest. Euro and Sterling are mixed for now as it’s still unsure where Brexit uncertainty is heading to. The common currency’s rally attempt is also capped by poor economic data from Germany. Trade optimism underpin investor confidence and focus will turn to job report from the US today.

Technically, EUR/GBP is now sitting in an important zone of 0.8891/9051 and we’d still expect this zone to hold and bring rebound. However, sustained break of 0.8891 will suggest reversal for deeper fall to 0.8797 fibonacci level and below. AUD/USD is still struggling around 0.6822 resistance for now. Firm break will extend the rebound from 0.6677 towards 0.6910 support turned resistance. However, rejection by 0.6677 will retain near term bearishness for another low below 0.6677.

US non-farm payroll report will be a major focus today and could seal the case for another FOMC rate cut later in the month. Fed fund futures are pricing in “only” 93.5% chance of another -25bps cut to 1.75 to 2.00%. Markets are expecting 162k job growth in August. Unemployment rate is expected to be unchanged at 3.7%. Average hourly earnings are expected to rise 0.3% mom.

Looking at other related data, ADP reported 195k growth in private sector jobs, which is positive. Four-week moving average of initial jobless claims was largely unchanged, edged up slightly from 211.5k to 216.3k. However, ISM manufacturing employment dropped sharply from 51.7 to 47.4, signaling contraction. ISM non-manufacturing employment dropped -3 pts to 56.2. Conference Board consumer confidence dropped slightly from 135.8 to 135.1. The over all set of data suggested some solid NFP readings today.

There is hope for some sort of progress in US-China trade negotiations in October. More importantly, as China stop short of retaliating against the latest round of 5% tariffs by the US, chance of further escalation has somewhat receded. Strong job numbers will give Fed policy makers more reasons to keep bullets at bay first.

Merkel: Germany welcomes Chinese investment but there are checks in some strategic sectors

German Chancellor Angela Merkel appeared at a business forum with Chinese Premier Li Keqiang in Beijing today, after part of her trip to China. Merkel said that her country welcomes all Chinese companies for investment. But the government checks investments in certain strategic sectors and critical infrastructure. Merkel also urged “there will be a solution in the trade dispute with the United States since it affects everybody” in the world”

On the other hand, Li hoped that Germany will accept more Chinese companies and loosen up export rule for certain goods. Li also pledged that China is opening up its economy.

In a Nikkei interview, BoJ Governor Harukiho Kuroda maintained his optimistic view on the economy. He noted that “we’re maintaining momentum toward the price stability target” of 2% inflation”. Also, “domestic demand — consumer spending and capital investment — are relatively firm.” However, “caution is needed” due to overseas uncertainties, in particular with trade war. Cutting interest rates “further into the negative zone is always an option” if more monetary stimulus is needed.

BoJ has laid out the four policy options in case of a downturn. Those include cutting the short-term policy rate, lowering its target for long-term rates, stepping up asset purchases and accelerating expansion of the monetary base. Kuroda said “we’re considering a variety of possibilities, including combinations of these and improved versions.”

Australia AiG Performance of Construction Index recovered to 44.6 in August, up from 39.1. The reading indicated an easing in the construction industry’s overall rate of decline. Looking at some details, rates of decline in new orders, supplier deliveries and employment were all slower in the month. But overall, key activity sub-index fell for an 11th consecutive month. 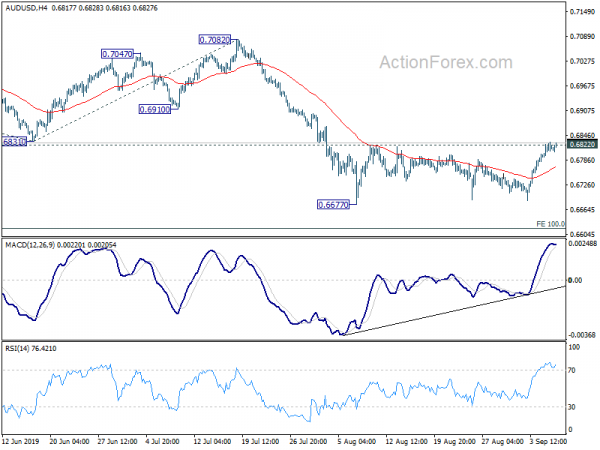 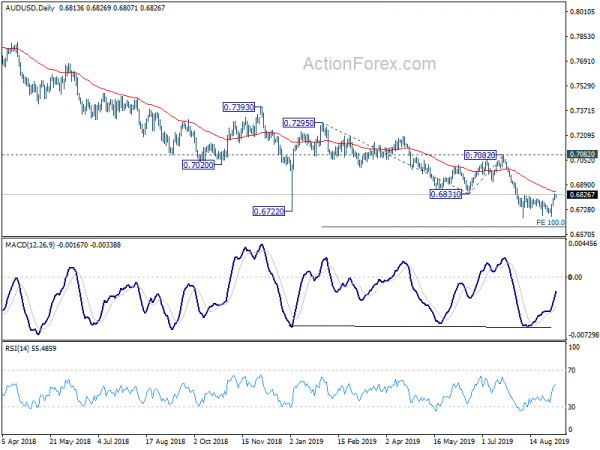