Dollar firms up mildly today as all eyes are on FOMC rate decision. A rate cut has turned from being a done deal to debatable, based on market pricing. While a cut is still generally expected, the greenback could be supported if Fed signals that the door for further mid-cycle adjustment is closed. Over the week, Dollar is only outshone slightly by Canadian Dollar, which is lifted by oil prices. Staying in the currency markets, commodity currencies are generally in pressure today, while Euro and Swiss Franc are firmer.

Technically, GBP/USD and GBP/JPY are extending recent rebound but momentum is weak. Both are pressing important near term fibonacci levels. Thus, we’d stay cautious on topping. EUR/USD and AUD/USD are both staying in consolidations, awaiting Dollar’s direction. USD/CHF is pressing 0.9975 key near term resistance, and solid break there will be an important sign of Dollar strength.

Fed still expected to cut even markets are paring bets

Traders continued to pare back their bets on another Fed cut, just ahead of the announcement later today. As of now, fed fund futures are only indicating 54.2% chance of a -25bps to 1.75-2.00%. That’s notably lower than 87.7% chance just a week ago. Trade tensions seemed to be easing a with a US-Japan deal in sight. Also, there is prospect of de-escalation in US-China tariff war. Additionally, oil prices surged this week after an historic disruption in production facilities in Saudi Arabia. Inflation might come back earlier than originally expected.

Though, for now, the rate cut is still generally expected. Updated economic projections would be a major focus, include rate path and dot plots. Additionally, Chair Jerome Powell’s press conference will be closely watched too. The question is whether Powell would signal the end of the so-called “mid-cycle” adjustment.

White House economic adviser Larry Kudlow indicated yesterday that the US-Japan trade deal will likely be formally announced this month. A meeting is scheduled on September 25, during the UN General Assembly in New York, between President Donald Trump and Japanese Prime Minister Shinzo Abe. Kudlow said “there just might be an announcement at the United Nations.”

On trade negotiation with China, Kudlow expressed his optimism and “there’s a little music in the air, which is not always so but right now, we should enjoy the day.” Deputy-level meetings will be held on Thursday and Friday in Washington, in preparation for the high-level US-China trade talks in mid-October.

According to a Financial Times report, in case of another Brexit delay, BoE Governor Mark Carney might be asked to extend his term once again, beyond the planned departure date of January 31. Ensuring smooth Brexit transition, in whatever form, is a top priority of the central bank. Additionally, UK might face another elections in the coming months. Any proposed successor for Carney could be easily rejected by the next government.

Carney, who took over the job from Mervyn King on July 1 on 2013, originally planned to serve a five-year term only. He had been asked to extend his term before by former Chancellor of Exchequer Philip Hammond.

Outlook in AUD/USD remains unchanged. Intraday bias remains neutral with focus on 0.6807 minor support. Break will suggest that corrective recovery from 0.6677 has completed at 0.6894. Intraday bias will be turned to the downside for retesting 0.6677. Break will resume larger down trend. On the upside, above 0.6894 will resume the rebound. But upside should be limited below 0.7082 key resistance to bring down trend resumption. 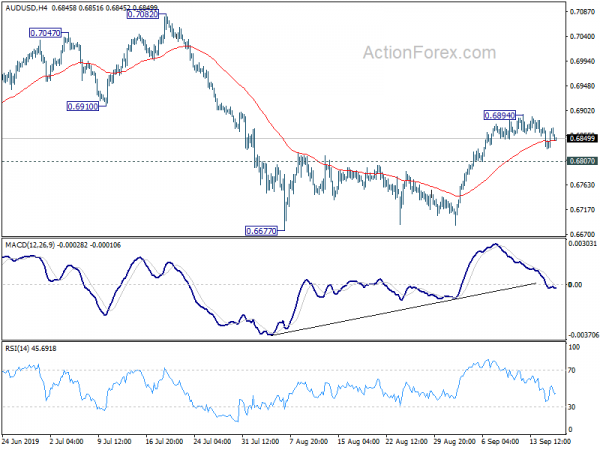 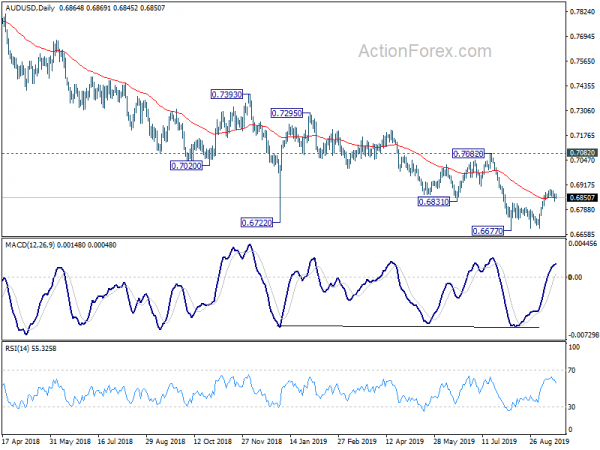