Yen and Swiss Franc rise broadly in Asian session today, followed by Dollar, on mild risk aversion. Traders are seeing some risk of a snap election in UK after the schedule of Brexit deal was voted down. Additionally, political risks in Hong Kong continued on news that China is planning to replace Chief Executive Carrie Lam. At this point, commodity currencies are generally lower as led by Australian Dollar. Sterling and Euro are mixed.

Technically, the case for Dollar reversal is building up. Yet, no resistance levels are taken out yet. Focus will be on 1.1062 minor support in EUR/USD, 0.6810 in AUD/USD and 0.9904 minor resistance in USD/CHF. These levels have to be taken out to indicate sustainable rebound in greenback. While Sterling retreats, there is also no clear sign of reversal yet. Further rise is expected in the pound as long as 1.2582 support in GBP/USD, 135.74 in GBP/JPY and 0.8811 resistance in EUR/GBP hold.

UK Prime Minister Boris Johnson got the backing from Commons on his Brexit Withdrawal Agreement Bill in principle (second reading), with 329 to 299 votes. However, more MPs were against the ultra tight timetable to complete the legislative process. They believed that more time is needed to scrutinize the details, than just three days of debate. The schedule for the bill was voted down by 322 to 308 votes.

Another Brexit delay beyond October 31 looks inevitably needed. But Johnson refused to commit to that yet. He said after the votes “let me be clear: our policy remains that we should not delay, that we should leave the EU on Oct. 31 and that is what I will say to the EU and I will report back to the House”.

Hours later, European Council President Donald Tusk tweeted that he will recommend the EU27 to accept UK request for extension. And he will propose a written procedure, i.e., without another emergency summit.

US Ross: Far better than 50-50 chance for signable trade deal with China next month

On trade talks with China, US Commerce Secretary Wilbur Ross said there is “far better than 50/50” chance that the trade agreement is “signable on or about the time of the Chile conference”, referring the APEC summit on November 16-17. Though, “you never know with paperwork, you can always run into a glitch at the last minute. Also, he said China was “following through in good faith on the promises that they made” earlier this month to press ahead with big purchases of US farm products.

Ross also indicated new trade negotiations with EU could be an alternative to auto tariffs. He said,
“one would be to say, ‘I’m just not going to do anything’, the second would be to impose tariffs on some or all . . .  the third might be some other form of negotiation.”
Ross added that President Donald Trump has “quite a lot of alternatives as to what he can decide to do, and I don’t think we should prejudge what the conclusion will be”.

So far, Trump’s administration has hesitated to start auto tariffs, and turned to trade negotiations instead. A six-month reprieve was offered back in May which pushed the deadline for decision in mid-November. And so far, Canada, Mexico, South Korea and Japan have each struck deals with the US already. EU will be the most relevant should auto tariffs come into effect.

Separately, RBNZ Assistant Governor Christian Hawkesby said he’s “very” happy with the way in which interest rate cuts are feeding through into the economy. Additionally, he added that rising house prices could boost consumption and ultimately inflation.

Intraday bias in AUD/USD remains neutral at this point and outlook is unchanged. While rebound from 0.6677 might extend, we’d continue to expect strong resistance from 0.6894 resistance to limit upside to bring down trend resumption. On the downside, below 0.6810 minor support will turn bias back to the downside for 0.6723. Break will bring retest of 0.6670 low. However, firm break of 0.6894 will dampen our bearish view and turn focus back to 0.7082 key resistance. 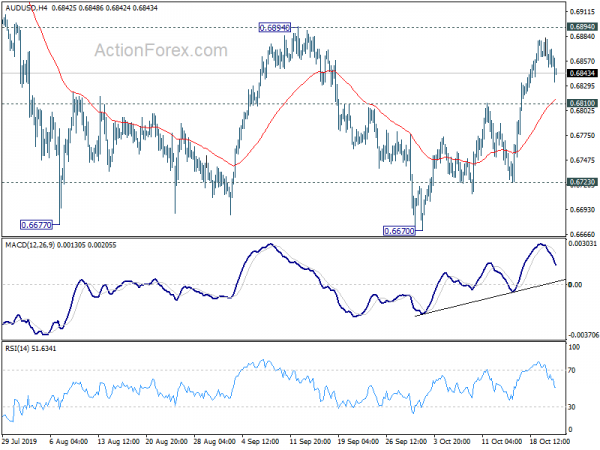 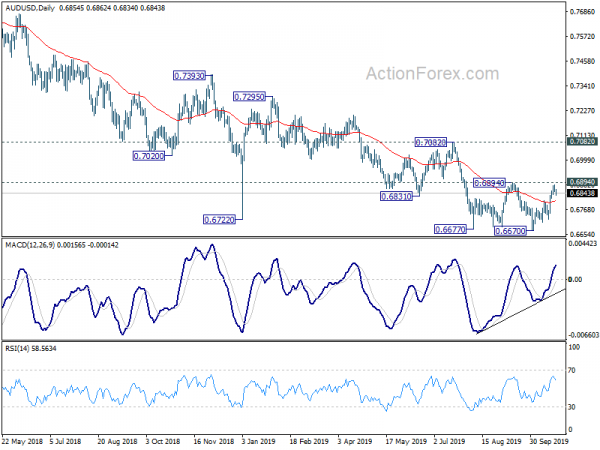