Trade optimism is the main diver in the financial markets today. There are talks that US officials are considering to remove the 15% tariffs on USD 112B worth of Chinese goods, put to effect back on September 1. In return, US would demand stronger intellectual property protections. If realized with the phase one trade deal, that would be the first real de-escalation of tariff war between US and China. USD/CNH dives through psychologically important 7 handle. Meanwhile, German and US treasury yields rise strongly, with US 10-year yield back above 1.8 handle.

In the currency markets, commodity currencies are generally the strongest one, as led by Australian Dollar. Swiss Franc and Yen are weakest naturally. Dollar is mixed for the moment but Gold’s decline suggests there is not much selling pressure in the greenback. Technically, EUR/AUD resumed recent fall from 1.6432 and should be heading to 1.5905 support. AUD/JPY breaks 75.29 to resume the rebound from 69.95 towards 76.16 resistance. But AUD/USD is staying in tight range below 0.6929 temporary top. With today’s decline in EUR/USD, focus is back on 1.1062 support and break will confirm completion of rebound from 1.0879. In that case, we might see Dollar strength spilling over to other pairs.

From Canada, trade deficit narrowed to CAD 1.0B in September versus expectation of CAD 0.6B.

Richmond Fed President Thomas Barkin said in a speech that the economy “looks healthy”, with solid GDP growth, robust consumer spending and a strong labor market. There are headwinds from trade and uncertainty, that might be “lowering business confidence and dampening investment”. They might also ” lessen the effectiveness of traditional fiscal and monetary policy”.

He will be “closely watching the divergence between consumer spending and business investment; the strength of the U.S. economy versus weakness internationally; and the optimism of the stock market compared to the pessimism of the bond market.”

UK PMI Services rose to 50.0 in October, up from 49.5 and beat expectation of 49.6. It’s now back at 50.0 no-change market. However, new business falls for second month running. Expectations pick up slightly but remain subdued. All Sector PMI rose to 49.5, up from 48.8, but stayed below 50.

Chris Williamson, Chief Business Economist at IHS Markit said: “The UK PMI surveys collectively indicated a further overall decline in private sector output in October. Contractions have now been recorded in four of the past five months, marking the worst spell since 2009 during the global financial crisis…

“The October reading is historically consistent with GDP declining at a quarterly rate of 0.1%, similar to the pace of contraction in GDP signalled by the surveys in the third quarter. While official data may indicate more robust growth in the third quarter, the PMI warns that some of this could merely reflect a pay-back from a steeper decline than signalled by the surveys in the second quarter, and that the underlying business trend remains one of stagnation at best.”

RBA left cash rate unchanged at 0.75% as widely expected. In the accompanying statement, it noted that rate cuts since June are supporting employment, income growth and return of inflation to target. But given global developments and domestic spare capacity, ” it is reasonable to expect that an extended period of low interest rates will be required”. The central bank also maintained it’s “prepared to ease monetary policy further if needed”.

Outlook for the Australian economy is “little changed” from three months ago. The central scenario is for the economy to growth by 2.25% in 2019 (slight downgrade from 2.5% as mentioned in August), and then gradually pick up to 3% in 2021. Unemployment rate is expected to remain at around 5.25% for some time, before gradually declining to a little below 5% in 2021.

BoJ Kuroda: There are various possible measures for additional easing

BoJ Governor Haruhiko Kuroda reiterated that the new forward guidance indicated “downward bias on policy rates”. However, it “does not limit additional monetary easing measures to rate cuts”. He added that “there is no change to our understanding that, besides lowering policy rates, there are various possible measures for additional easing.”

Nevertheless, Kuroda maintained his optimism regarding Japan’s economy, and expected the moderate expansion to continue on robust capital expenditure and a tight job market. He said, “although the timing of a pick-up in overseas economies has been delayed, our view is that Japan’s economy will not decelerate substantially.”

China Caixin PMI Services dropped to 51.1 in October, down from 51.3 and missed expectation of 52.8. PMI Composite Index edged up from 51.9 to 52.0, best reading since April. Markit noted that solid rate of manufacturing output growth contrasts with only marginal rise in services activity. Composite employment falls fro the first time in three months. Outstanding business at was at the fastest expansion since March 2011.

Zhengsheng Zhong, Director of Macroeconomic Analysis at CEBM Group said: “The Caixin China Composite Output Index inched up to 52 in October from 51.9 in the month before, amid an improvement in manufacturing, but a softer service sector performance. The employment gauge dipped into contractionary territory, indicating renewed pressure on the labor market, which was likely due mainly to structural unemployment… Domestic and foreign demand both improved. However, business confidence remained weak, constraining the release of production capacity. Structural unemployment and rising raw material costs remained issues. The foundation for economic growth to stabilize still needs to be consolidated.” 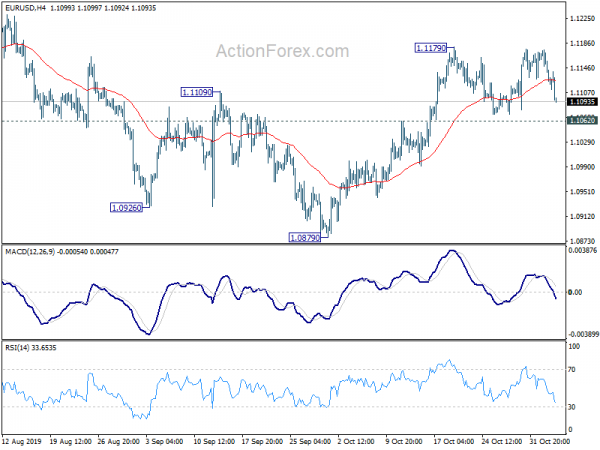 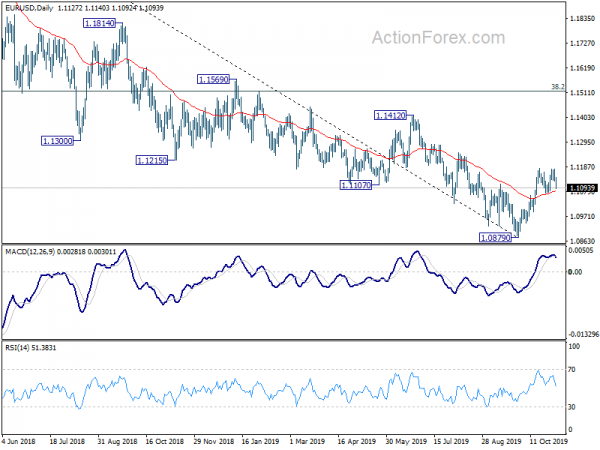