Risk On Ahead of US-China Trade Deal, Sterling Weak and Aussie Firm

Asian markets are generally in risk on mode today as traders await signing of US-China trade deal phase one. Commodity currencies strengthen with Australian Dollar leading the way up. On the other hand, Sterling is currently the weakest one as weighed down by dovish comments from BoE officials. A number of important UK economic data will featured this week, starting from GDP today. These data would be watched closely for assessing the chance of imminent BoE rate cut. Yen and Swiss Franc are mildly softer too.

Technically, despite current recovery, AUD/USD is held below 0.6930 minor resistance. Further fall is still in favor through 0.6849 temporary low to 0.6754 support. However, firm break of 0.6930 will revive near term bullishness and turn focus back to 0.7031 resistance. At this same time, USD/JPY is still eyeing 109.72 key resistance. Break will resume whole rally from 104.45. Both pairs could depend on development in risk markets in the early part of the week.

Mnuchin: English version of US-China trade deal to be released at the day of signing

US Treasury Secretary Steven Mnuchin told Fox News Channel that the US-China trade deal phase one is a “very, very extensive agreement”. And, “it is USD 200B of additional products across the board over the next two years, and, specifically in agriculture, USD 40B to USD 50B.”

He also emphasized that the deal “wasn’t changed in translation”. The translation process was a “technical issue”. At the day of signing, the administration “will be releasing the English version”. It’s reported that the final Chinese text was not completed yet.

China Vice Premier Liu He will lead a delegation to the US today and is set to sign the trade deal in Washington on Wednesday.

BoE policymaker maker Gertjan Vlieghe told Financial Times on Sunday that it’s been a “close call” on whether he’d vote for a rate cut. And, “it doesn’t take much data to swing it one way or the other”. He added, “I really need to see an imminent and significant improvement in the UK data to justify waiting a little bit longer.”

Vlieghe noted there will be a lot of information coming in “as soon as the end of January”. “We’ll get a lot of business and some household surveys that cleanly relate to the period after the election, so that will give us an initial read as to how people are responding.”

Outgoing Governor Mark Carney said last week that BoC could cut interest rate in economic weakness persists in to 2020. Another MPC member Silvana Tenreyro also said she could be inclined to a cut a sluggishness remains. The upcoming data from UK this week will be important tests for the Pound.

S&P Global Ratings said Australia’s AAA sovereign rating is not at immediate risk from the devastating bushfires. Credit analyst Anthony Walker said, “we do not believe that these bushfires will affect credit metrics enough to trigger rating changes in the next one to two years”.

“We believe there is capacity within our current ratings on the sovereign and state governments to absorb the fiscal costs, which are relatively small compared with their budgets,” he noted.

UK and US data closely watched this week

UK and US data will catch most attention this week. UK GDP, productions, trade balance, CPI and retail sales will be featured. There is practical chance of a rate cut by BoE between the start and end of Brexit transition period. That would very much depend on incoming economic data.

Dollar failed to extend last week’s rally through key near term resistance due to unspectacular job report. It’s having another chance this week with CPI and retail sales featured. China’s data on Friday could also be market moving.

AUD/USD’s recovery from 0.6849 extends higher today but stays below 0.6930 resistance. Intraday bias stays neutral and another decline is still expected. Corrective rebound from 0.6670 could have completed with three waves up to 0.7031. Below 0.6849 will target 0.6754 support to confirm this bearish case. However, break of 0.6930 will turn focus back to 0.7031 resistance instead. 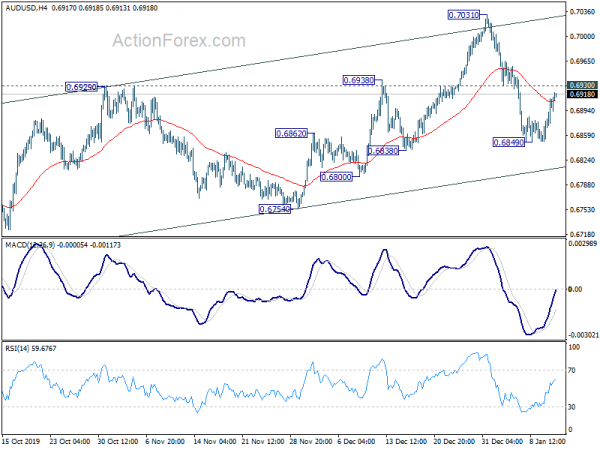 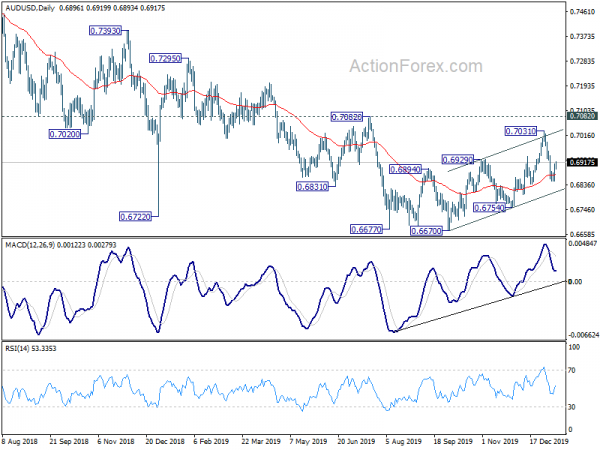