While risk sentiments stabilize today, there is no clear momentum of any meaningful recovery in global stock markets. Investors remain on guard against new developments of China’s coronavirus outbreak, which confirmed cases exceed 2003’s SARS already. Yen and Dollar trading generally firmer today, as in early US session. Though, Swiss Franc is pressured together with Aussie and Kiwi.

Focus will turn to FOMC rate decisions. Markets are pricing in no chance of a cut today and Fed would in no way spoil such expectations. Fed Chair Jerome Powell would reiterate that monetary policy is at the right place. The committee will need more time to gauge the impacts of last year’s three rate cuts, as well as impact of US-China trade deal phase one etc. Overall, the announcement and press conference will likely be a non-event.

Here are some previews on FOMC:

Zhang Ming, an economist at the Chinese Academy of Social Sciences, said China’s annualized growth could slow to 5.0% in Q1 this year, or even lower, due to coronavirus outbreak. That’s sharply lower than original estimate of 6.0% annualized growth. While there could be recovery afterwards, full-year expansion could flow from 2019’s 6.1% to just 5.7%.

He estimated that the impact of the current coronavirus would be significantly higher than that of SARS back in 2003. Now, China’s economy is much more reliant on services and consumption. The outbreak has also hit sectors including transportation, tourism, catering and entertainment. It could also weigh on the employment market as unemployment rate could exceed 5.3% in the coming months.

In response, Zhang expected the government to step up policy support while PBoC could lower the reserve requirement ratios for banks and interest rates.

German Foreign Minister Heiko Maas said in a Die Zeit article that “we all want zero tariffs and zero trade barriers” between EU and UK. However, “that also means zero dumping and zero unfair competition.”

He emphasized, “Without similar standards to protect our workers, our consumers and the environment, there can be no full access to the largest single market in the world.”

Mass also urged that EU and UK must conduct the negotiations regarding post-Brexit relationship in a way that “won’t harm the European Union”.

Rolf Bürkl, GfK consumer expert: “Initial agreements in the trade dispute between the United States and China will also ease the situation in Germany. As an export nation, the country relies on the free and unrestricted exchange of goods.”

“The positive start for the consumer climate in 2020 confirms our assessment that private consumption will continue to be an important pillar of the German economy this year. For the year as a whole, GfK forecasts real growth in private consumer spending in Germany of one percent.”

In the Summary of Opinions of BoJ’s January 20/21 meeting, it’s noted that there has been “no further increase in the possibility that the momentum toward achieving the price stability target will be lost.”. Therefore, it’s “appropriate” to keep monetary policy unchanged. Nevertheless, the possibility of inflation losing momentum continues to “warrant attention”. It’s “appropriate” to tilt toward monetary accommodation.

Also, Japan is just “only halfway toward moving out of the so-called Japanification” of secular stagnation where low growth, low inflation, and low interest rates last for a long period. Risk of deflation continues to “warrant attention”. Downside risks to economic activity and prices are “still significant”. It’s necessary to be prepared for possible economic downturn as one of the risk scenarios.

Also released, Japan consumer confidence was unchanged at 39.1 in January, missed expectation of 40.8.

ABS Chief Economist, Bruce Hockman said: “Drought conditions are impacting prices for a range of food products. Food prices increased 1.3 per cent this quarter with price rises for beef and veal (+2.9 per cent), pork (+4.7 per cent), milk (+1.7 per cent) and cheese (+2.4 per cent). Both the impact from the drought and lower seasonal supply contributed to price rises for fruit (+6.8 per cent) this quarter.”

“Annual inflation remains subdued partly due to some price falls for housing related expenses. Through the year to the December 2019 quarter, price falls were recorded for utilities (-1.0 per cent) and new dwelling purchase by owner-occupiers (-0.1 per cent), while rent price rises remained modest (+0.2 per cent),” said Hockman.

EUR/USD’s decline resumes after brief consolidation and intraday bias back on the downside for 1.0981 support. Decisive break there should confirm completion of corrective rise from 1.0879 at 1.1239. Further fall should then be seen to retest 1.0879 low. In any case, near term outlook will stay bearish as long as 1.1085 support turned resistance holds, in case of recovery. 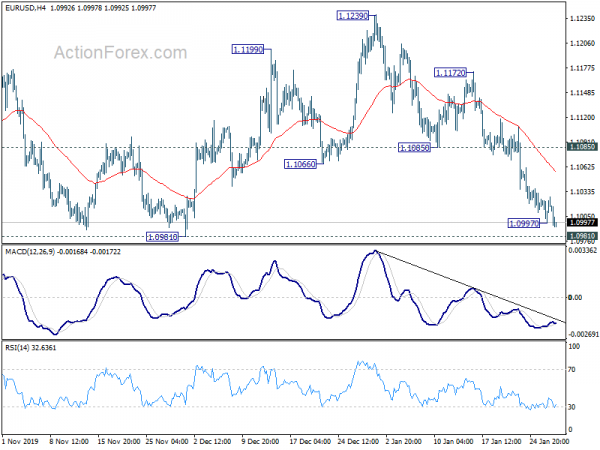 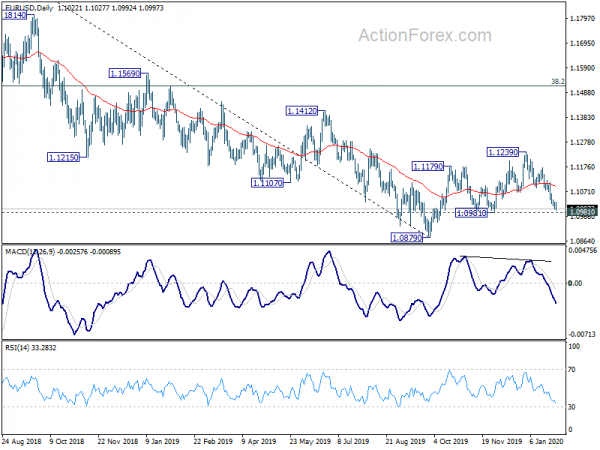