Markets are starting another with rather quiet mood. Some economic data might be not as bad as expected, but they’re giving no lift to sentiments. Dollar attempted for a rebound overnight but there was apparently no follow through buying. Gold’s dip was a positive sign for the greenback but there was no follow through selling too. At the momentum, Swiss Franc and Dollar are the relatively stronger ones for today. Canadian, Australian and Sterling are there weakest. But major pairs and crosses are just staying inside yesterday’s tight range.

Technically, Yen crosses are showing sign of weakness in general. A focus will be on 106.75 support in USD/JPY. Break will indicate completion of the rebound from 101.18 and bring deeper fall back towards this low. It remains to be seen, if that happens, whether Dollar would be dragged down elsewhere. After yesterday’s decline, gold’s focus remains on 1558 support to confirm completion of rebound from 1451.16.

Cleveland Fed President Loretta Mester told CNBC it’s “not unrealistic” to see some “really bad economic numbers” in terms of unemployment and economic activity declining. However, she added that the current downturn is “not a typical recession” as it happened in an otherwise healthy economy brought to a near standstill to fight the coronavirus.

“Part of the goal now is to offer the kind of lending and making sure the financial markets stay liquid and making sure they stay on a firm foundation and then bridging people from the economy, which in February looked very good … so that when we get to the other side of this … the economy and economic activity can come back,” Mester said.

“One of the things that makes us in a better spot than some other countries is that our banking system was strong coming into this,” she said. “One of the other actions the Fed has taken is to really encourage the banks to continue lending.”

In the minutes of March 18 meeting, RBA said that Australia would likely experience a “very material contraction in economic activity, which would spread across the March and June quarters and potentially longer.”. The size of contraction would depend on the “extent of the social distancing requirements, and potential lockdowns” for containing the coronavirus. Also, there will be “significant job losses over the months ahead”. Economy is expected to recover following containment of the coronavirus, “but the timing of this was uncertain”.

At the meeting, RBA decided to roll out a package a measures of four elements. Cash rate was lowered to 0.25%. Purchase of government bonds to keep 3-year yield at 0.25%. Launched a term funding facility to support credit to businesses, and adjustment of interest rate on ES balance held by financial institutions.

Australia AiG Performance of Manufacturing Index jumped to 53.7 in March, up from 44.3. The reading indicates a return to growth after four months of contraction in the sector.

AiG said: “This somewhat surprising expansion – in the midst of the escalating COVID-19 pandemic and emerging recession – is almost entirely due to a huge surge in demand for manufactured food, groceries and personal care items, as shoppers stock up on processed food, toilet paper, cleaning products and other household essentials”.

Also from Australia, building permits rose 19.9% mom in February, much higher than expectation of 4.5% mom.

Also from Japan, PMI manufacturing was finalized at 44.8 in March, down from February’s 47.8. Manufacturing output contracted at the sharpest rate since aftermath of 2011 tsunami. Production volumes slumped at the fastest rate for almost nine years, with sharpest drop in demand since April 2011. Supply chain issues also intensified further.

Joe Hayes, Economist at IHS Markit said, “the cascading impact of COVID-19 on the global economy is diminishing the chances of a V-shaped recovery.”

Dr. Zhengsheng Zhong, Chairman and Chief Economist at CEBM Group said: “To sum up, the manufacturing sector was under double pressure in March: business resumption was insufficient; and worsening external demand and soft domestic consumer demand restricted production from expanding further. Whereas, business confidence was still high and the job market basically returned to the pre-epidemic level, laying a positive foundation for the economy’s rapid recovery after the epidemic.”

But major focus will be on US ADP employment and ISM manufacturing. US will also release construction spending and crude oil inventories.

USD/JPY is staying in tight range and intraday bias remains neutral first. On the downside, decisive break of 106.75 support should confirm completion of rebound from 101.18, after failing 112.22 key resistance. Intraday bias will be turned back to the downside for retesting 101.18 low. On the upside, above 109.70 minor resistance will turn bias back to the upside for retesting 111.71. Decisive break of 112.22 carry larger bullish implication and target 114.54 resistance next. 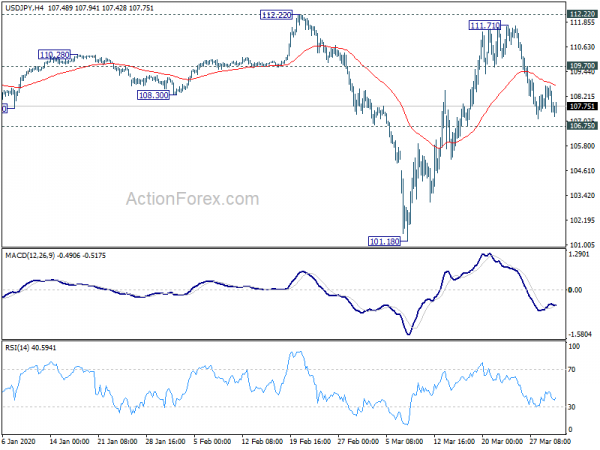 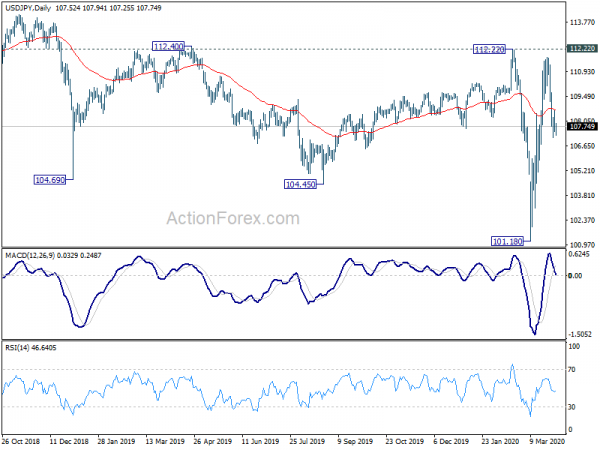