Dollar’s decline continues today on improving risk sentiments. In particular, it’s back under pressure against Euro and Swiss Franc despite earlier recovery attempt. Canadian Dollar is not far away with drag from weakening oil price. On the other hand, European majors are generally stronger today, partly with help from improvements in coronavirus situations. Spain and Austria are partially exiting lockdown even though France is extending it.

European Commission Vice President Valdis Dombrovskis said EU could finance a coronavirus recovery fund that is worth up to EUR 1.5T. He added that the recovery fund could be financed by bonds backed by guarantee from EU member states. But “nothing had been decided yet”.

He added that the Commission was open to all possibilities permitted by the EU Treaty of Lisbon, adding: “We’re not ruling out any option if the member states agree on it. As we all know, that doesn’t apply to eurobonds.”

“The simple fact that the Eurogroup has agreed on a coronavirus aid package makes it easier for very indebted member states to access the capital markets. No euro zone country currently has problems finding buyers for its government bonds,” he said.

French Finance Minister Bruno Le Maire said the country’s economy is set to contract -8% this year, instead of -6% as mentioned just last week. Coronavirus lockdown was originally planned to end today, but was delayed to at least May 11.

To help the economy, Le Maire said the government expects to spend around EUR 25B on partial unemployment benefits. Total emergency spending could exceed EUR 100B if necessary. He added, “we have chosen to take on debt to save our economy: more debt for fewer bankruptcies”.

Staying in Europe, some activities including construction and manufacturing are allowed to resume today, as the death tolls peaked earlier in the month. But Health Minister Salvador Illa insisted that the country remains in lockdown as shops, bars and public spaces will stay closed until at least April 26. Shops in Austria are also reopening today.

OBR: UK economy to contract -35% in Q2 but bounces back quickly

UK’s Office for Budget Responsibility said the country’s real GDP could contract by -35% in Q2, but bounces back quickly afterwards. Unemployment could rise by more than 2 million to 10% in Q2, but declines more slowly than GDP recovers.

Public sector net borrowing could increase by GBP 218B to the groups March forecast, to GBP 273B, or 14% of GDP. The large sharp rise in borrowing this year largely reflects  the impact of economic disruption on receipts and policy measures that add to public spending.

In response to OBR’s forecast, Chancellor of Exchequer  Rishi Sunak said, “the report makes clear that the actions we’ve taken – unprecedented actions – will help to mitigate the impact of the virus on our economy and that if we hadn’t done these things it would mean that things were a lot worse, for example with unemployment.

China returned to trade surplus, but exports plunged -13.3% this year

Australia NAB business confidence dropped to -66, recession of unprecedented speed and magnitude ahead

Australia NAB Business Confidence dropped to -66 in March, down from -2. That’s record low, even worse than the reading during 2008 global financial crisis and early 90s recession. Business Conditions dropped to -21, down from 0. While condition index was slightly worse than the reading at financial crisis, it sit well above the trough during 90s recessions.

NAB chief economist Alan Oster said “We expect a recession of unprecedented speed and magnitude for the Australian economy over the next three quarters. “This will see a sharp increase in unemployment.”

“Policy makers have made a huge response that we think will be unable to offset the negative prints we will see in economic data in the near term but we are optimistic these actions will support a solid recovery once the virus is contained,” Oster added.

New Zealand Treasury published a report analyzing the economic impacts of the coronavirus pandemic. Assuming no additional fiscal measures beyond the announced NZD 20B direct support, contraction in GDP in the year to March 2021 could range from 13% (the least restrictive scenario), to closer to one-third (with tight restriction through the year).

Separately, Finance Minister Grant Robertson said that the government will announce further support for businesses this week and more in the Budget next month. He said, “the Budget is also another important part of the response, and it will include significant support to respond to and recover from Covid-19. As is usual with the Budget, there may well be pre-announcements, especially where they relate to urgent Covid-19 response activities.” 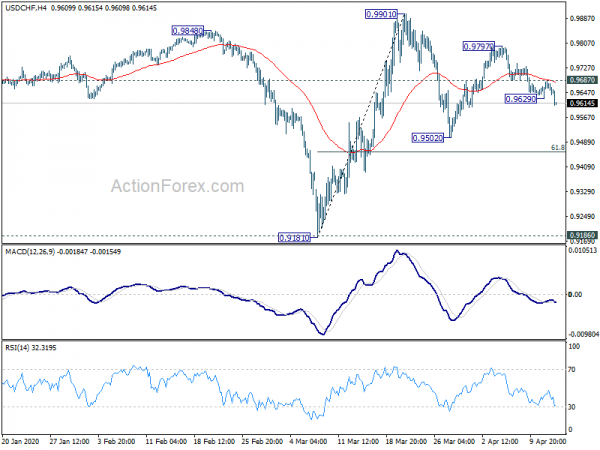 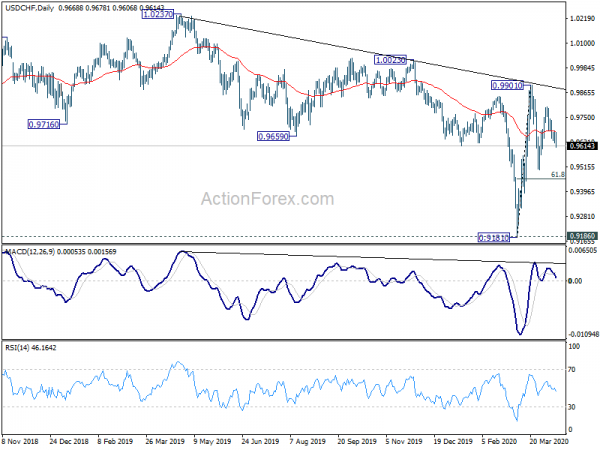