Australian Dollar remains the strongest one for the week as stronger than expected CPI data prompted another round of buying in Asia. Other commodity currencies are also firm, but the Japanese Yen is not too far away. Dollar, on the other hand, is the worst performing one for the week so far. The greenback will turn to US GDP and Fed for savior. European majors are generally mixed.

ABS Chief Economist, Bruce Hockman said: “There were some price effects of COVID-19 apparent in the March quarter due to higher purchasing of certain products towards the end of the quarter, as restrictions came into effect… More evident effects of COVID-19 are expected in the June quarter CPI.”

New Zealand imports and exports surged in March, but trade with China shrank

Fitch downgraded Italy’s credit rating to BBB- yesterday, down from BBB, with a stable outlook. The rating is now just a single notch above “junk level”. The agency said “the downgrade reflects the significant impact of the global Covid-19 pandemic on Italy’s economy and the sovereign’s fiscal position…. According to our baseline debt dynamics scenario, the [debt] to GDP ratio will only stabilise at this very high level over the medium term, underlining debt sustainability risks.”

Fitch also warned “downward pressure on the rating could resume if the government does not implement a credible economic growth and fiscal strategy that enhances confidence that general government debt/GDP will be placed on a downward path over time.”

Italian Finance Minister Roberto Gualtieri responded and said “the fundamentals of Italy’s economy and public finances are solid”.He added that Fitch’s move didn’t take into account the measures by EU. “In particular, the strategic orientation of the European Central Bank does not seem to be adequately valued.”

Dollar index range bound as US GDP and Fed awaited

Two heavy weight events are scheduled for the US today. Firstly. Q1 GDP is expected to show -4.0% annualized contraction. That would be the steepest contraction since the Great Recession in 2009. Consumer spending has definitely suffered a big hit from the coronavirus lockdowns. Some focuses would be on business investments. Optimism was lifted just for a brief while by US-China trade agreement phase one, but then nose-dived on the pandemic.

Fed is generally expected to keep monetary policies unchanged today. There will be no formal economic projections until June, which is agreeable as everything ties to how the coronavirus pandemic is contained. Nevertheless, Fed chair Jerome Powell could still offer a glimpse of what he expected in the second half, and he view on the shape of the recovery. Guidance on interest rates would be something to watch too. Powell has ruled out negative rates for now and we’ll see if he sticks to the same position.

While Dollar is performing rather poorly this week, the development in Dollar index isn’t that bad. That’s primarily due to indecisiveness in Euro, though. Technically, we’re seeing price actions from 102.99 as a corrective pattern, with the sideway pattern from 98.27 as the second leg. Firm break of 55 day EMA will confirm the start of the third leg towards 98.27 support. But in that case, we’d expect strong support from 61.8% retracement of 94.65 to 102.99 at 97.83 to contain downside and bring rebound. 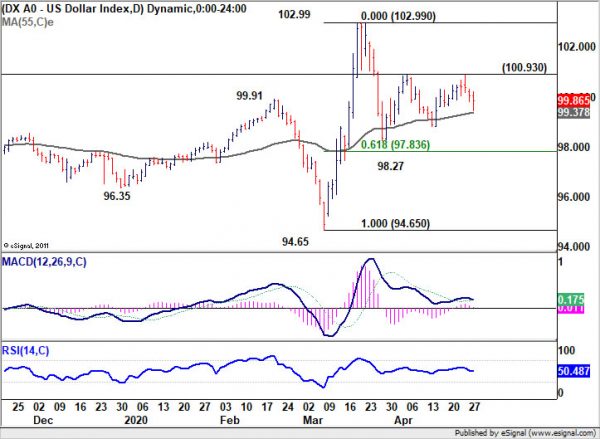 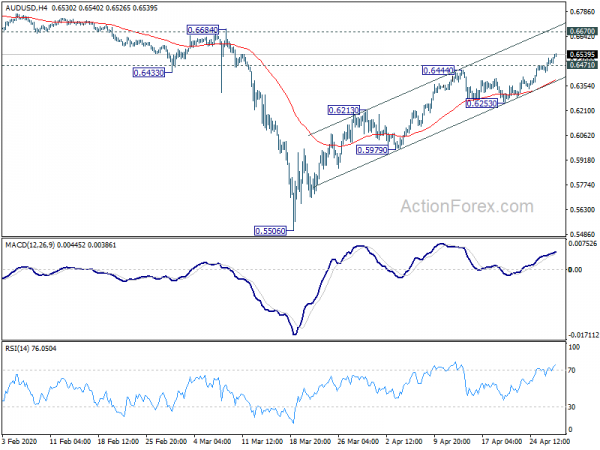 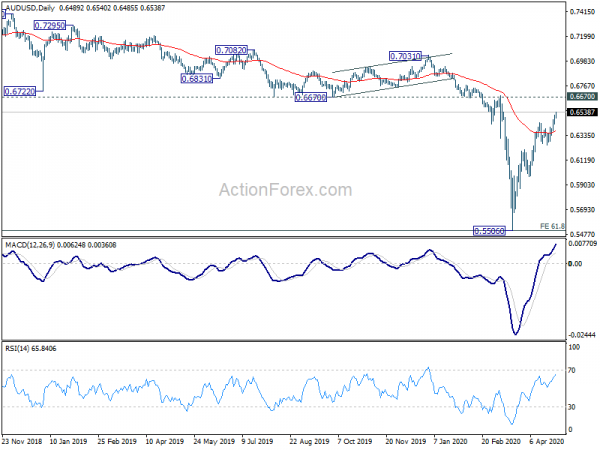