Yen and Dollar surge in Asian session today as markets are clouded by new uncertainty over Hong Kong’s future. The situation carries significance firstly on the direction of US-China trade tension. Secondly, Hong Kong’s international financial hub status could be in question, which would limit China’s ability to raise capital in the current global economic turmoil. There is no spillover from the free fall in HK to other stock markets yet. But sentiments might be vulnerable. As for today, commodity currencies are generally softer. 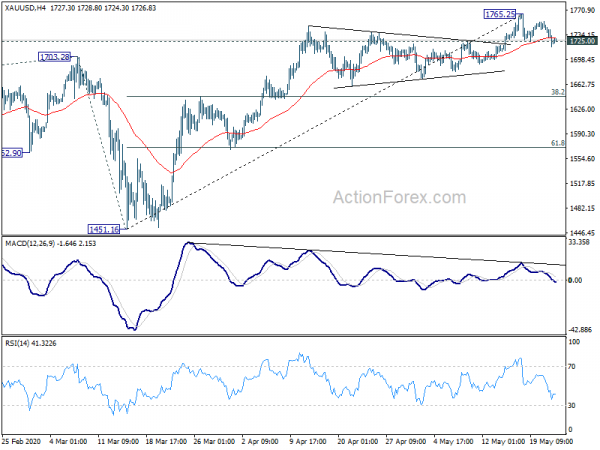 Hong Kong stocks tumble sharply today as China confirmed that it’s going to impose its own national security laws in the city. The new legislations are expected to ban any sedition, secession and subversion of the central government run by the Chinese Communist Party. Most importantly, the method used will bypass the city’s own legislative body, effectively violating the “One-Country, Two-Systems” as promised. Hong Kong’s special international status granted by the US and other countries due to the high degree of autonomy is seen as in severe jeopardy.

US President Donald Trump warned that “if it happens we’ll address that issue very strongly.” Senate Majority Leader Mitch McConnell also said, “a further crackdown from Beijing will only intensify the Senate’s interest in re-examining the U.S.-China relationship.” State Department spokesperson Morgan Ortagus urged China to “honor its commitments and obligations to the Sino-British Joint Declaration” of guaranteeing Hong Kong a “high degree of autonomy” until at least 2047. She added, those commitments are “key to preserving Hong Kong’s special status in international affairs, and, consistent with US law, the United States’ current treatment of Hong Kong”.

The last British governor of Hong Kong, Chris Patten, called the move a “comprehensive assault on the city’s autonomy”. “At best, the integrity of ‘one country, two systems’ hangs by a thread,” he added. “Unless the Chinese Communist regime sees sense, this will be hugely damaging to Hong Kong’s international reputation and to the prosperity of a great city.” “UK should tell China this is outrageous”.

HSI gapped lower today and selloff continued through the session. The multiple rejection by 55 day EMA, and the break of 23483.31 support today, suggest that corrective rebound form 21139.26 has completed at 24855.47. Deeper fall is now expected for retesting 21139.26 low, or even further to resume the medium term down trend. It remains to be seen if the selloff in Hong Kong stocks would spillover to other markets. 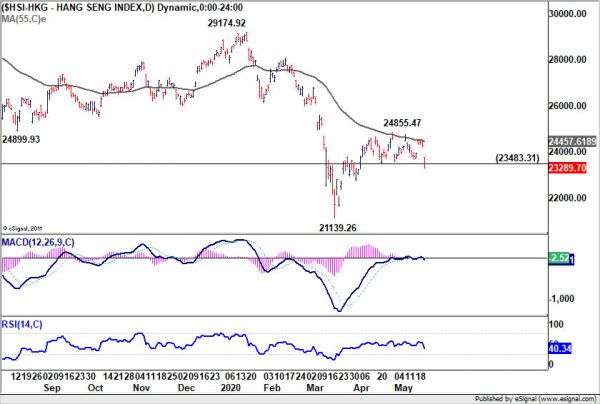 At a unscheduled monetary policy meeting today, BoJ announced to introduce a new Fund-Provisioning Measure to support financing of small and medium-sized businesses. With the new facility, zero-interest loans are offered to financial institutions that boost lending to SMEs by tapping government guarantee programs. It also offers to pay 0.1% interest to lenders that boost such loans.

At the same meeting, BoJ also kept monetary policy unchanged. Under the yield curve control framework, short-term policy rate is held at -0.1%. BoJ will also purchase JGBs, without upper limit” to keep 10-year yield at around 0%. Kataoka Goushi dissented the decision and pushed for lowering short- and long-term interest rates further, in response to a possible increase in downward pressure on prices.

Japan CPI core turned negative for the first time since 2016

The data suggests clear downward pressure on prices due to coronavirus containment pressure. Also, core CPI could head deeper into negative territory as services and energy inflation wane ahead.

Fed Clarida: Easing of financial conditions is buying some time for the economy

Fed Vice Chair Richard Clarida said the US economy is “really in an uncharted situation right now. My own sense is that we’ll begin to get a better sense of the scenario and the trajectory the economy is on in early fall.”

Fed Bostic: Atlanta reopening has been a mixed bag

Atlanta Fed President Raphael Bostic said reopening of the state has been a “mixed bag. “Some places and some people are feeling like they’re very prepared to jump back into the economy and get back to where they were pre-crisis,” Bostic added. “But there are a lot of businesses where they’re not seeing the same kind of foot traffic they were before.”

He reiterated his two primary concerns. Firstly, surge in unemployment could be permanent rather than temporary. The coronavirus could come back with a second wave and further curtail activity. “If that happens repeatedly, then I think the recovery is going to struggle a bit,” he said.

Bostic also said he’s “not a big fan of negative rates” and he’s “concerned about flare-ups and consumer impact”.

BoC Poloz: We’re in a era where interest rates going to stay low

BoC Governor Stephen Poloz said that “we are in an era where interest rates are probably going to stay low, for demographic reasons and economic growth reasons. I don’t know how low really but they’re just not going to be like where they were 20 years ago or 30 years ago”.

He’s also optimistic that Canada could be on track for the best-case recovery scenario. That is, growth might just shrink -15% in Q2 comparing with Q4. Nevertheless, overall inflation rate turned negative in April. Poloz added that “if it’s going to be underperforming, then we’re going to be easier for longer. That’s the essence of the (2%) target and that’s why it’s there.”

RBNZ Governor Adrian Orr said the QE program had been “highly effective” in lowering wholesale interest rates. Given the nation of the coronavirus shocks, the central bank had “plenty of assets to purchase while maintaining our operational independence”.If the program remained effective, “then ongoing large-scale asset purchases would be a very simple story, subject to the markets functioning well”.

He also said a negative OCR could be “efficient” and “effective”, but there was a “limit” to what it could do. FX intervention might lead to currency depreciation “but that could be very short-lived”. Also, the foreign exchange markets are “very large markets”, he added. “You don’t want to stand in front of them. You want to work with them.”

Intraday bias in AUD/USD is turned neutral again with today’s retreat. Rebound from 0.5506 might extend but we’d still expect upside to be limited by 0.6670 key resistance, at least on first attempt. On the downside, break of 0.6402 support will confirm short term topping and turn bias to the downside for 0.6253 support next. 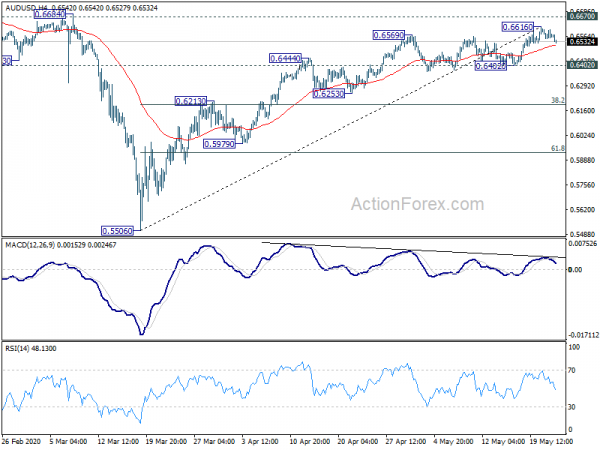 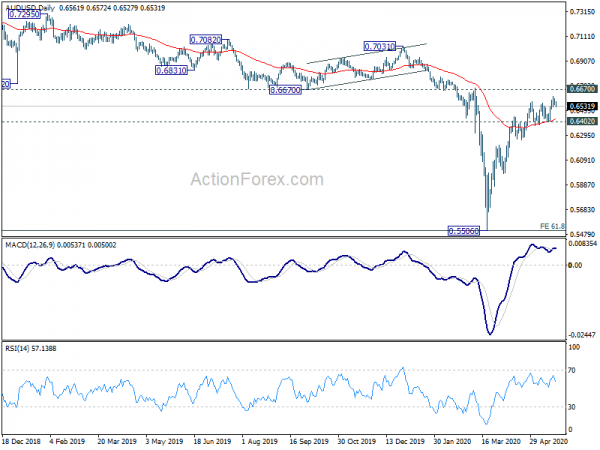