There is not much change in the global investor sentiments today, as stock markets continue to rally on lockdown exit optimism. Much better than expected job data from the US also provide something to cheer. Though, in the currency markets, recent moves appear to have been exhausted. Australian Dollar turns notably weaker on profit taking after a long bull run. But Swiss Franc is the weakest while Canadian Dollar is not far behind ahead of BoC rate decision. On the other hand, New Zealand Dollar and Euro are currently the stronger ones for today. Markets could be turning into mixed consolidative trading.

Technically, Gold is back eying 1711.01 minor support with this week’s fall. Break will likely extend the corrective pattern from 1765.25 with another down leg, towards 100% projection of 1765.25 to 1693.54 from 1745.14 at 1673.53. That might be a sign of a rebound in Dollar elsewhere. Meanwhile, AUD/NZD continues to struggle to sustain above 1.0865 near term resistance. Break of 1.0667 minor support will indicate short term topping and bring deeper pull back. If both happens as mentioned, they could together point to a deeper pull back in the powerful AUD/USD. 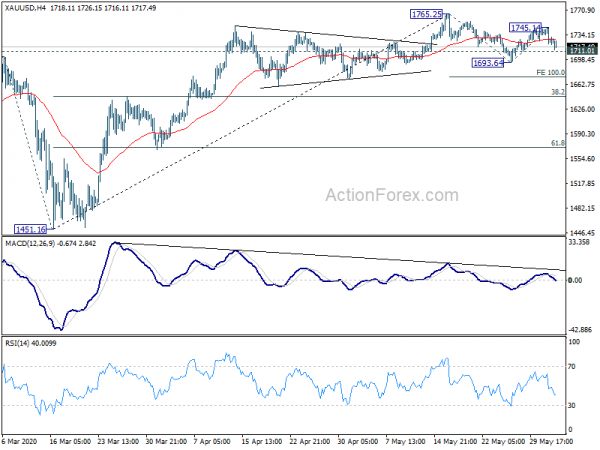 “The impact of the COVID-19 crisis continues to weigh on businesses of all sizes,” said Ahu Yildirmaz, co-head of the ADP Research Institute. “While the labor market is still reeling from the effects of the pandemic, job loss likely peaked in April, as many states have begun a phased reopening of businesses.”

Eurozone GDP is consequently set to fall at an unprecedented rate in the second quarter, accompanied by the largest rise in unemployment seen in the history of the euro area.” But ” the downturn has already eased markedly in all countries surveyed.”

“Providing there is no resurgence of infection numbers, the planned lifting of lockdowns will inevitably help boost business activity and sentiment further in coming months. “However, the outlook is scarred by the prospect of demand remaining weak due to household spending being hit by high levels of unemployment and corporate spending being subdued as companies repair balance sheets.”

“We therefore remain cautious with respect to the recovery. Our forecasters expect GDP to slump by almost 9% in 2020 and for a recovery to prepandemic levels of output to take several years.”

Tim Moore, Economics Director at IHS Markit: “The COVID-19 pandemic continued to have a severe impact on UK service sector activity in May, despite a boost in some areas from the gradual easing of lockdown measures. Survey respondents noted that deep cuts to corporate spending had been a major factor dragging down business activity in May, leading to a lack of work to replace completed projects.

Swiss GDP contracted -2.6% qoq in Q1, worse than expectation of -2.2% qoq. “Due to the coronavirus pandemic and the measures to contain it, economic activity in March was severely restricted. The international economic slump also slowed down exports.”

Japan PMI composite rose to 27.8 in May, indicative of -10% annualized GDP contraction

Joe Hayes, Economist at IHS Markit, said: “While the month of May has seen the Japanese government reduce the stringency of its lockdown, latest survey data indicated that economic activity continued to sink at a rate which had previously been unrivalled before the coronavirus crisis began… Looking at May’s survey data in isolation, the reading of the Composite PMI is indicative of GDP falling by around 10% on an annual basis. Taking into consideration the April reading, which was even worse, it is clear that the impact on second quarter GDP is going to be enormous.”

China Caixin PMI Services rose to 55.0 in May, up from April’s 44.4. PMI Composite rose to 54.5, up from 47.6, back in expansion territory. Markit said that business activity and new work rose at quickest pace since late 2010. Pandemic continued to weigh heavily on export orders. Employment fell slightly as firms look to raise efficiency.

Wang Zhe, Senior Economist at Caixin Insight Group said: “In general, the improvement in supply and demand was still not able to fully offset the fallout from the pandemic, and more time is needed for the economy to get back to normal. The composite employment gauge stayed in negative territory as companies were cautious about increasing headcounts. But they were relatively optimistic about the economy’s forward momentum, and look forward to implementation of the policies announced during the annual session of China’s top legislature.” 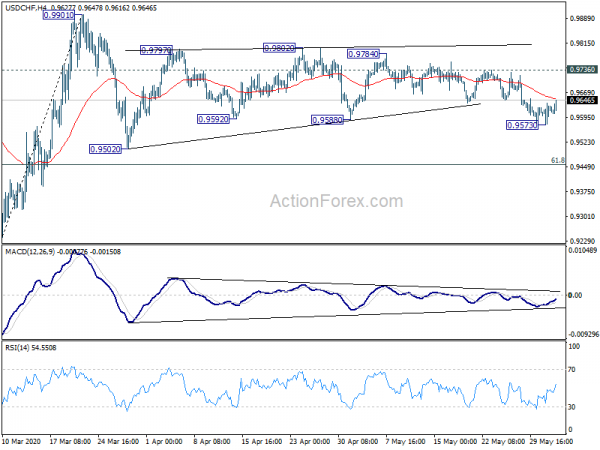 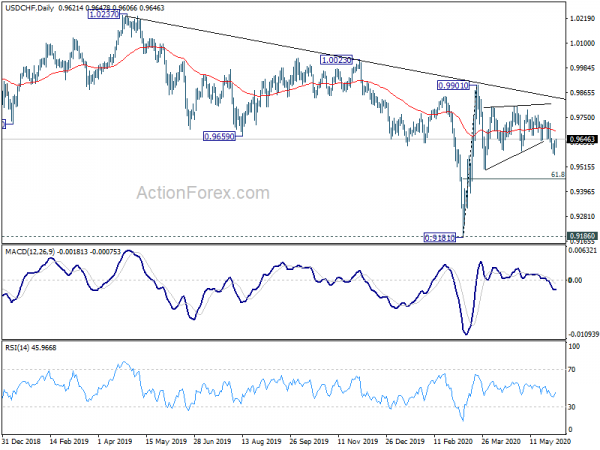