Sterling is the better performer in Asian session today. It’s supported by news that former Prime Minister Boris Johnson withdrew from party leadership contest on Sunday, even with enough support to make the final ballot. The development left business friendly Rishi Sunak, a former Finance Minister, as a favorite to replace outgoing Prime Minister Liz Truss. That would give some political stability, at least until a general election.

Dollar and Swiss Franc are also firmer on mixed market sentiment. Japan Nikkei followed the strong rebound in the US on Friday. But Hong Kong HSI is down as much as -5%, as reaction to the result of China’s 20th Communist Party Congress, where President Xi Jinping cemented absolute power. China’s Shanghai SSE and Singapore Strait Times are also down. Yen softens as impact of last week’s intervention faded. Commodity currencies are on the soft side while Euro is mixed. 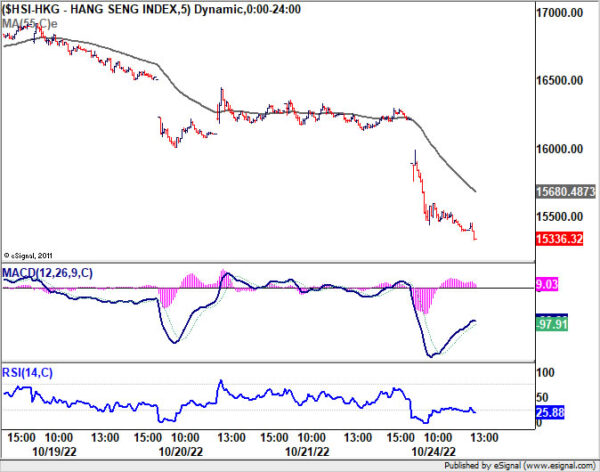 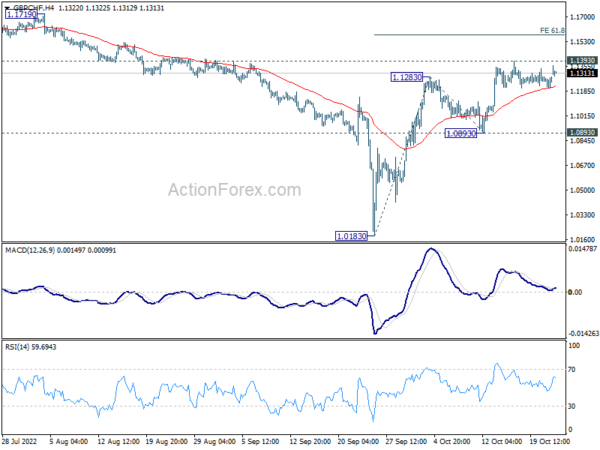 Japan Finance Minister Shunichi Suzuki declined to confirm if there was intervention in the currency markets last Friday. But he reiterated, “we cannot tolerate excessive volatility caused by speculative moves, and we are ready to take necessary steps when needed…. we are in a situation where we are confronting speculative moves strictly.”

Masato Kanda, Vice Finance Minister for International Affairs also said, “we won’t comment” on whether Japan will intervene gain. He said, “we will take appropriate steps against excessive volatility 24 hours a day, 365 days a year.”

Laura Denman, Economist at S&P Global Market Intelligence, said: “Latest flash PMI data has pointed to a further improvement in Japan’s private sector economy in October… The manufacturing sector, however, continued to struggle in the face of weak demand conditions and severe cost pressures… With inflationary pressures remaining elevated across the private sector, business confidence dipped to a six-month low.”

RBA Kent: Depreciation in AUD will have very modest uplift in prices

RBA Assistant Governor Christopher Kent said in a speech, “The Board expects to increase interest rates further in the period ahead, given the need to establish a more sustainable balance of demand and supply and in the face of a very tight labour market.” The “size and timing” of rate increases will depend on “incoming data” and “outlook for inflation and the labour market.”

Kent also said the appreciation of the US dollar will “add to the cost of imports for a time” because much the global trade is invoices in it. At the same time, rise in US interest rates will also “contribute to a decline in global inflation pressures”. The depreciation of Australia’s nominal trade-weighted exchange rate over the year to date will contribute only a “very modest uplift in the level of consumer prices over the period ahead”.

After a delay amid the 20th Communist Party Congress last week, China released a batch of economic data today.

BoC and ECB to hike, BoJ to stand pat

Three central banks will meet this week. BoC is expected to slow down its tightening pace, and raise the overnight rate by 50bps to 3.75%. But opinions are divided as higher than expected August consumer inflation data increased the chance of another 75bps hike. Nevertheless, the bigger question is whether BoC will signal that tightening cycle is starting to be close to an end.

ECB is widely expected to increase the main refinancing rate by 75bps to 2.00%. President Christine Lagarde should signal that tightening is going to continue until early next year while the pace would be data dependent. A focus will be on the signal of the start of QT discussions, as rate is approaching neutral, if not there after this week’s hike.

BoJ is widely expected to keep monetary policy unchanged. Governor Haruhiko Kuroda will reiterate that current inflation is largely import driven, and local wage growth doesn’t warrant that inflation will stay above target in sustainable way. Nevertheless, like with recent meeting, there are speculations that BoJ might loosen up its 0.25% ceiling for 10-year JGB yield.

On the data front, GDP from the US, Eurozone and Canada will be featured, together with PMIs from Australia, Japan, Eurozone US and US. Germany will release Ifo business climate and GFK consumer sentiment. Australia will release CPI. 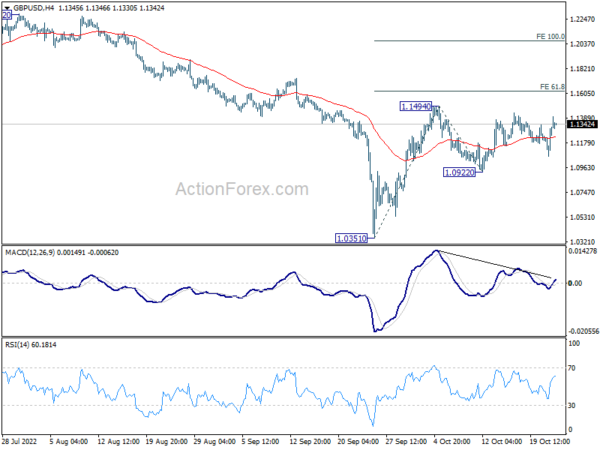 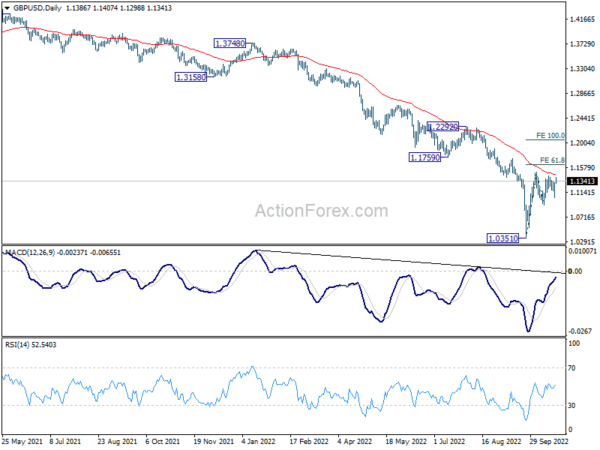