The strong rally in both Swiss Franc and Japanese Yen, together with selloff in commodity currencies, argue that forex traders are preparing themselves for some risk aversion. US President Donald Trump’s decision on Iran deal today should be the key perceived risk. At the time of writing, European indices are performing not too badly, with DAX down -0.6%. FTSE is actually flat. US futures also point to slightly lower open only. But much volatility is anticipated later in the day. It could either be a relieve rally, or a selloff.

Technically, USD/CAD’s break of 1.2913 confirms resumption of rise from 1.2526 for 1.3124. AUD/USD’s dive through 0.7450 suggests that it’s finally trying to sustain below 0.75 key support to confirm medium term reversal. EUR/USD is picking up some downside momentum again as 1.19 is broken. 1.1888 in EUR/CHF is a key level to watch. Break will confirm the rejection from 1.2 handle and EUR/CHF would likely dive deeper through 1.18. 128.94 in EUR/JPY is another level to watch and break will confirm resumption of the fall from February high at 137.49. Both development could help accelerate the selloff in EUR/USD.

Fed chair Jerome Powell delivered a speech on “Monetary Policy Influences on Global Financial Conditions and International Capital Flows” in a conference in Zurich today. Powell said that “Fed policy normalization has proceeded without disruption to financial markets, and market participants’ expectations for policy seem reasonably well aligned with policymakers’ expectation.” And because that “markets should not be surprised by our actions”. And, even though there could be spillovers of Fed’s actions to other economies, the role of Fed’s monetary policy is “often exaggerated”.

Regarding emerging market economies, Powell said that Fed and other advanced economies “played a relatively limited role” in the surge capital flow to these markets in recent years. Hence, “there is good reason to think the normalization of monetary policies in advanced economies should continue to prove manageable for” emerging economies.”

Also, “for eligible bonds, the CSPP can be credited with almost the entire decline in spreads since the announcement of the programme.”

In the 2018 Budget announced today, Australian Treasurer Scott Morrison plotted the path to return to balance in fiscal 2019/20, and turn into AUD 22b surplus in fiscal 2020/21. The move is welcomed by S&P Global Ratings. But the negative outlook on Australia’s AAA sovereign ratings is maintained.

S&P said in a statement after the budget release Australia’s budgetary position has improved thanks to strength in domestic and global economies. The government also showed “commitment to fiscal prudence” in planning to balance the budget earlier. However, the risks to Australia fiscal outlook remain, including “increasing external economic uncertainties, global trade tension, and risk aversion to emerging markets. And, “risks to the government’s plan for an earlier return to budget surpluses are significant. ”

China recorded a trade surplus of US$ 28.8B in April, beating consensus of US$ 27.5B. In March, China reported a deficit of US$ 5B due to seasonal factor. Compared with the same period last year, trade surplus narrowed by -23.1%. The 12.9% yoy increase in exports was overshadowed by a 21.5% jump in imports. Specifically, its trade surplus with the US expanded to US$ 22.2B, up from US$15.4B a month ago. In the first four months of the year, China’s trade surplus with the US reached US$ 80.4B. The data failed to do any help to soothe the recent trade tensions between the world’s two biggest economies. More in China Trade Surplus with US Highest So Far This Year; No Deal from Trade Talk but Not Yet Hopeless

AUD/USD’s decline resumed by taking out 0.7472 support and reaches as low as 0.7446 so far. Intraday bias is back on the downside. Sustained trading below 0.7500 will indicate medium term reversal and target next support at 0.7328. On the upside, break of 0.7559 resistance is needed to indicate short term bottoming. Otherwise, outlook will stay bearish in case of recovery.

In the bigger picture, medium term rebound from 0.6826 is seen as a corrective move. Decisive break of 0.7500 key support will suggest that such correction is completed. In that case, deeper decline would be seen back to retest 0.6826 low. In case of another rise, we’d expect strong resistance from 38.2% retracement of 1.1079 to 0.6826 at 0.8451 to limit upside to bring long term down trend resumption eventually. 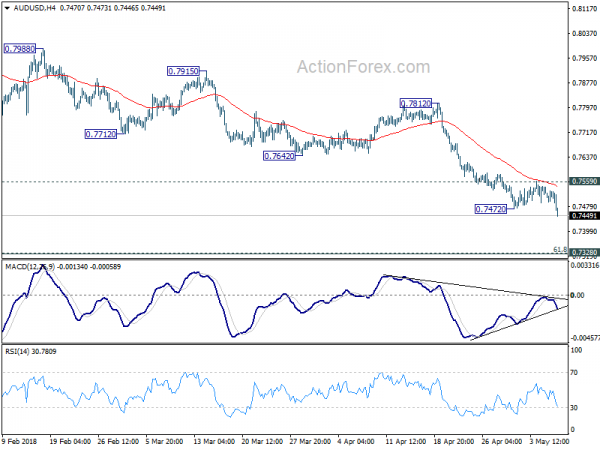 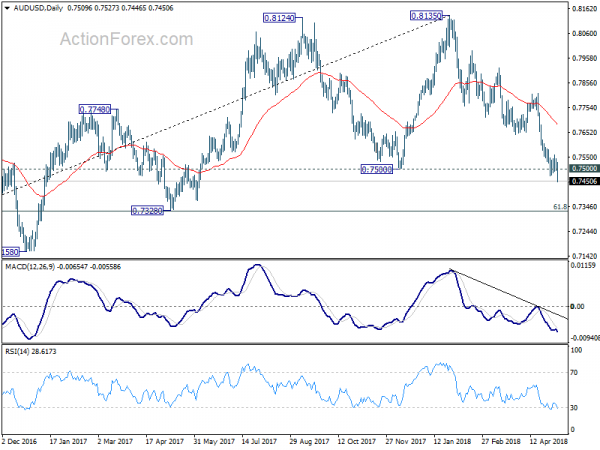