Risk aversion is a major factor in driving the markets today. But central bank expectations after data miss is equally important. Markets got nervous after US President Donald Trump said he’s “not satisfied” with the trade talks with China. USD/JPY got some support today after Trump tweeted that the trade deal with China is “moving along nicely.” But the overall market confidence was already hurt by the confusing, ever-changing comments.

There are still a lot of uncertainties regarding Italy. Italian President Sergio Mattarella will meet with Prime Minister candidate, politic novice law professor Giuseppe Conte today. It’s uncertain whether Conte will get Mattarella’s appointment. 5-star and the League, though, are still insisting on having Conte as the Prime Minister. But even if this uncertainty is cleared, the new Eurosceptic government will almost certainly clash with EU down the road. Selloff in Italian 10 year bonds continue today with yield up 0.1 at the time of writing to 2.4.

Safe haven flows into major European bonds is of course a factor driving yield down. More so, is appointing data prompt investors to pare back their expectations. UK April CPI missed again and an August BoE rate hike is getting more distant. Eurozone PMIs also point to further slowdown in growth momentum which could delay ECB’s exit of asset purchase program.

Looking ahead, Fed will release FOMC meeting minutes. We’re not expecting anything drastic from the FOMC minuets. It won’t likely change the fully priced in June hike. And Fed in on course for another hike in September. Meanwhile, it’s too early to tell whether one more hike in December is needed.

The Office of National Statistics noted that air fares made the largest downward contribution to the change in CPI. It noted that “the timing of Easter in the middle of April 2017 contributed to air fares rising by 18.6% on the month whereas this year, Easter fell at the beginning of April before the price collection period and there was no price rise. Instead, fares fell slightly, by 0.2%, between March and April.

Chris Williamson, Chief Business Economist at IHS Markit urged a “note of caution” interpreting the data. In particular, “despite the headline PMI dropping to an 18-month low, the survey remains at a level consistent with the eurozone economy growing at a reasonably solid rate of just over 0.4% in the second quarter.” Though, it’s becoming “increasingly evident that underlying growth momentum has slowed compared to late last year”. And the May’s results will “rekindle some concerns regarding downside risks facing the euro area economy.”

ECB Executive Board member Benoit Coeure he’s not worried about slowdown and the central bank is still on course to end the asset purchase program this year. Coeure told German newspaper Die Zeit that “at the end of last year, I said that I didn’t expect that our asset-purchase program would need to be extended again. I see no reason to change my view.” And, policymakers expect the economic expansion to continue, and are “increasingly confident that inflation will rise towards our aim of below, but close to, 2 percent.”

Regarding the upcoming new Italian government. Coeure said “it’s too early to comment on plans we don’t know.” But he emphasized that “on fiscal policy in general, the ECB’s view is well known: Europe has fiscal rules and they should be respected.”

RBNZ has significant room for easing, no need for unconventional policies

RBNZ released a 22-page bulletin article titled “Unconventional monetary policy since the Global Financial Crisis” today. In a summary, RBNZ hailed that the “unconventional” monetary policies adopted by some major central banks were “successful in easing financial conditions”. And, there were “emerging research suggests they boosted inflation and activity.”

Separately, RBNZ Assistant Governor John McDermott said in an interview that while there is “no imminent prospect” of using unconventional policy, the probability of needing them at this point in the cycle is higher than it ever was in history”. Therefore, “it would be silly of us not to be ready just in case.”

The Nikkei flash Japan manufacturing PMI dropped to 52.5 in May, down from 53.8 and missed expected of 54.6. In the release it’s noted that new order growth softened to 9-month low. However, input prices surged at the fastest pace since January 2014. Also, Joe Hayes, Economist at IHS Markit, noted that “headline figure signalled the weakest expansion in manufacturing growth in nine months.” Employment growth also eased. But, new export sales rose faster due to USD/JPY rise. Meanwhile, “input prices soared at the fastest pace in 52 months.”

Also from Japan, all industry activity index rose 0.0% mom in March, below expectation of 0.1% mom. 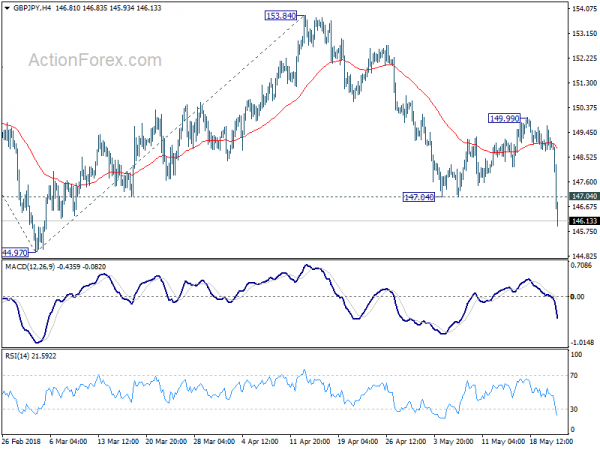 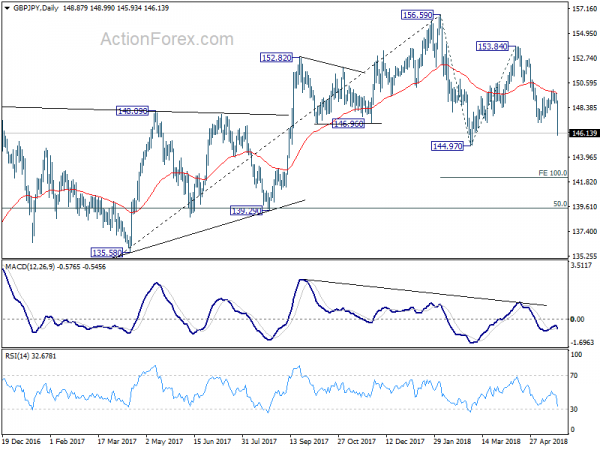