The markets were driven by multiple themes last week. Dollar ended up broadly higher as supported by hawkish FOMC minutes and rebound in treasury yields. However, it’s outshone by New Zealand and then Australian Dollar. Kiwi was boosted by stronger than expected CPI. Meanwhile, the Aussie was pulled up by iron ore prices, which countered the negative impact of falling Chinese stocks. Yen was the mixed despite risk aversion.

On the other hand, Sterling was the weakest one as pressured by Brexit impasse, weaker than expected CPI and retail sales. In particular, UK Prime Minister Theresa May achieved nothing in the EU summit. The deadlock of Irish border backstop remains a deadlock. And EU leaders even avoided calling an unscheduled summit in November to close the deal. Canadian Dollar was the second weakest one as weighed down by falling oil price as well as sharp deceleration in headline CPI. While BoC is still expected to hike this week, the path beyond is now far less certain.

Euro was originally very weak on Italian budget concerns. EU’s warning letter to Italy should have formally started the clash. Nonetheless, the common currency was later saved as EU expressed the intention to de-dramatize the situation. Also, Moody’s downgrade of Italy with stable outlook was well received. The common currency ended the week mixed and should have some room for recovery this week. But the situation is not solved unless Italy revises its budget, which will not happen. So, the recovery in Euro is likely only temporary.

The minutes of September FOMC meeting came in slightly more hawkish than expected. Firstly, the minutes noted that “participants generally anticipated that further gradual increases in the target range for the federal funds rate would most likely be consistent with a sustained economic expansion, strong labor market conditions and inflation near 2 percent over the medium term.” That is, it’s a consensus for rate hikes to continue.

Secondly, “a substantial majority of participants expected that the year-end 2020 and 2021 federal funds rate would be above their estimates of the longer-run rate.” And, “a few participants expected that policy would need to become modestly restrictive for a time and a number judged that it would be necessary to temporarily raise the federal funds rate above their assessments of its longer-run level”.

Dollar index drew strong support from 55 day EMA and rebounded yesterday. The rise from 93.81 is still in progress and should extend to retest 96.98 resistance first. For now, there is not enough evidence to suggest up trend resumption yet. Hence, we’d be cautious on topping below 96.98 high. On the downside, sustained trading below 55 day EMA might indicate completion of the rebound from 93.81. That would extend the consolidation pattern from 96.98 with another falling leg. But again, the range of the consolidation should have been set already. That is, another downside attempt should be contained by 38.2% retracement of 88.25 to 96.98 at 93.64, which is also close to 55 week EMA.

10 year yield closed higher at 3.198 last week and we might see further rise to retest 3.248 in near term. But for now, we’d expect consolidation from 3.248 to extend a while longer before up trend resumption. Hence, upside attempt could be limited by 3.248 at the next rally attempt. Another fall might be seen next. But in that case, downside should be contained by 3.030 support to bring rebound, which is close to 55 day EMA at 3.044.

DOW in interim consolidation, selloff to extend sooner or later

Euro suffered heavy selling on last week but staged a strong rebound on Friday to close mixed. A key factor for the relief rebound was that Moody’s downgraded Italy’s rally to Baa3, a notch above junk, with a “stable” outlook. Moody’s also indicated “Italy still exhibits important credit strengths that balance the weakening fiscal prospects.”

Also, European Economic Affairs Commissioner Pierre Moscovici said he wanted to reduce tensions with Italy, regarding the budget, through “constructive dialogue”. That came after the high profile warning letter that criticized Italy’s budget as “obvious significant deviation” of the recommendations adopted by the European Council.

During the week, Italian 10 year yield hit as high as 3.784 and German 10 year year yield hit as low as 0.396. Spread was over 330 at the worst. Though, German 30 year yield closed at 0.464 while Italian 10 year yield closed at 3.581. Spread is still at 311 but it’s already a sign of stabilization of some sort. S&P’s rating review is not expected to deliver something that vastly different from Moody’s. And while there will continue to be verbal exchanges between Italy and EU on the budget, the EU might want to further de-dramatize it to avoid market nervousness.

Canadian Dollar dived broadly last week on oil price as well as weak data. Headline CPI slowed sharply to 2.2% in September while retail sales contracted in August. But it seems that investors are still holding on to their bets on a BoC rate hike to 1.75% on October 24 this Wednesday. Chances of that stands at 93% as implied by the money markets. However, the much tamer than expected inflation reader does raise the doubt on whether BoC should continue with more rate hikes ahead, or at least, in a more gradual way.

WTI crude oil hit as high as 76.90 earlier in the month but was then rejected by key fibonacci resistance of 61.8% retracement of 107.68 to 26.05 at 76.50. While bearish divergence condition is seen in weekly MACD and RSI, it’s early to call for trend reversal as long as 64.43 support holds. Though, for the near term, WTI would likely gyrate downwards to 55 week EMA (now at 64.73) before bottoming. Both developments will give Canadian Dollar some downside pressure.

Australian Dollar ignored the selloff in Chinese stock markets and ended as the second strongest one last week. Some attributed to resilience to the fall from unemployment rate to 5.0%, lowest since 2012. But it should be noted that participation rate also dropped -0.2% to 65.4%. So, the drop in unemployment rate was more a reflection of decline in the size of labor force.

The rally in iron ore price was indeed seen as the main driver of Aussie’s strength last week. It should be noted that while Australia’s economy is closely tied to China, it’s the term of trade that matters ultimately, which is heavily influenced by commodity prices. Iron ore futures hit as high as 72.74 last week, highest since March, before closing at 71.69. While there is room for further rise in near term, we don’t expect a break of 78.69 resistance technically. And the rally could actually end earlier than that. So we don’t expect the strength in Aussie to persist for long. 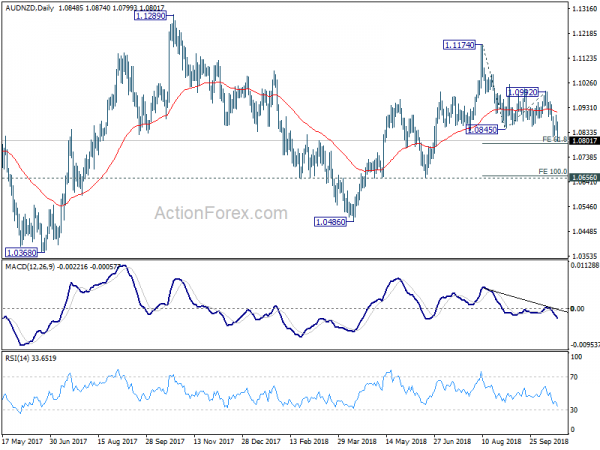 Chinese stocks bottomed in near term but no trend reversal

It’s another terrible week in the Chinese stock markets. US Treasury Secretary Steven Mnuchin, who always appear to be the nicest guy to China in trade or currency, refrained from naming China as a currency manipulator last week. He just put China in the monitoring list along side Germany, India, Japan, Korea, and Switzerland. But that didn’t stop the Shanghai SSE to extend recent down trend to as low as 2449.19.

Friday’s strong rebound could be attributed to the GDP miss, which showed only 6.5% annualized growth in Q3 versus expectation of 6.6%. While it’s a miss, China is still on track to hit 6.5% target this year. And, more importantly it’s actually not worse than the worst that investors feared. Some also attribute to the rebounds to Vice Premier Liu He’s calming words, and the rumor of Xi-Trump meeting at G20 summit next month. But after all, investors are, generally speaking, smart enough for not trusting what Chinese politicians say. The rebound, to us, is more about profit taking and guard against any surprised stimulus measures to be announced during the weekend again.

We’re holding on to AUD/USD short as last updated in last weekly report. It’s sold at 0.7100 with stop at 0.7185. The pair recovered further to 0.7159 last week but lost momentum there. There was decline attempts afterwards but failed. Overall outlook is unchanged price actions from 0.7040 are forming a consolidative pattern. It, admittedly, takes longer than expected to develop. But there is no sign of trend reversal yet. Hence, we’ll keep the stop at 0.7185, slightly above 50% retracement of 0.7314 to 0.7040 at 0.7178. We’re still expected the down trend from 0.8135 to resume sooner or later towards 0.6826 low. Whether we will exit around there will depend on the momentum of next fall. 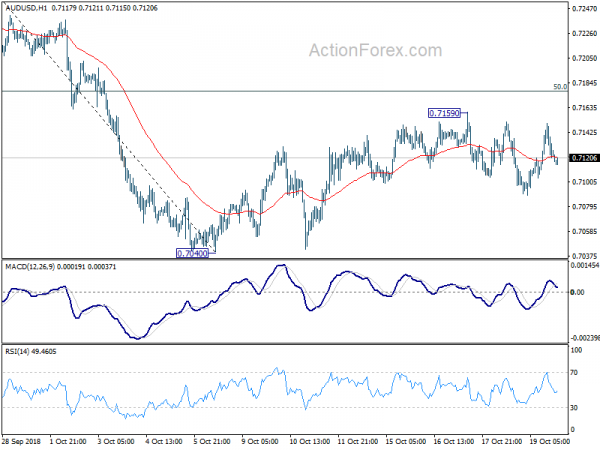 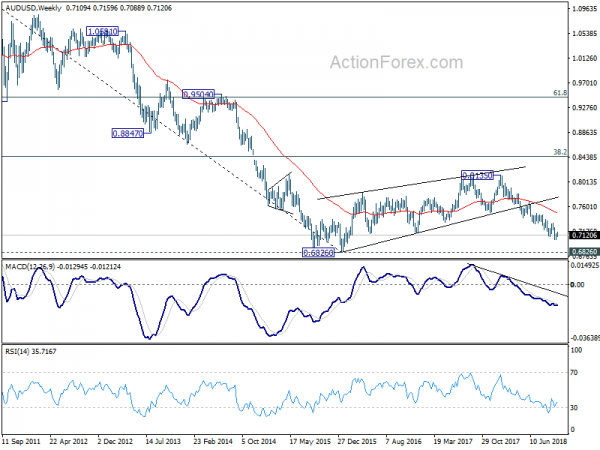 For new position, USD/CAD long is a close one to consider as the pull back from 1.3385 could have completed at 1.2781 already. And whole up trend from 1.2061 might be ready to resume. However, the pair is now pressing medium term trend line resistance, without breakthrough yet. And, there was no bullish convergence condition seen in daily MACD in the fall from 1.3385 to 1.2781. So, we’ll give it a pass first. 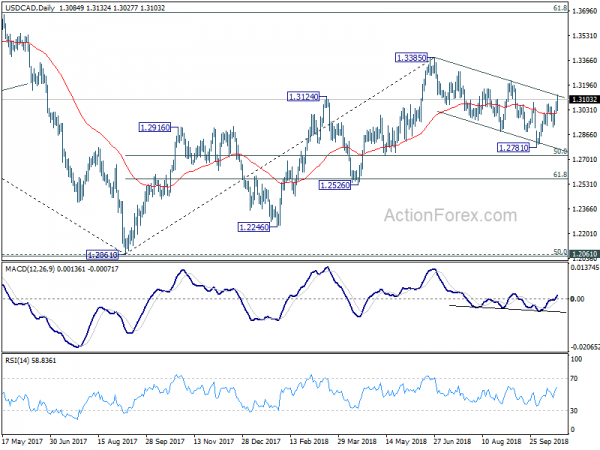 EUR/JPY’s decline form 133.12 extended to as low as 128.32 last week but recovered. Initial bias is neutral this week first. Another fall is in favor as long as 130.29 minor resistance holds. Below 128.32 will target 127.85 support first. Break will confirm completion of rebound from 124.89 at 133.12 and bring retest of this low. However, considering bullish convergence condition in 4 hour MACD, break of 130.29 will in turn suggest completion of fall from 133.12. In this case, intraday bias will be turned back to the upside for retesting 133.12 high. 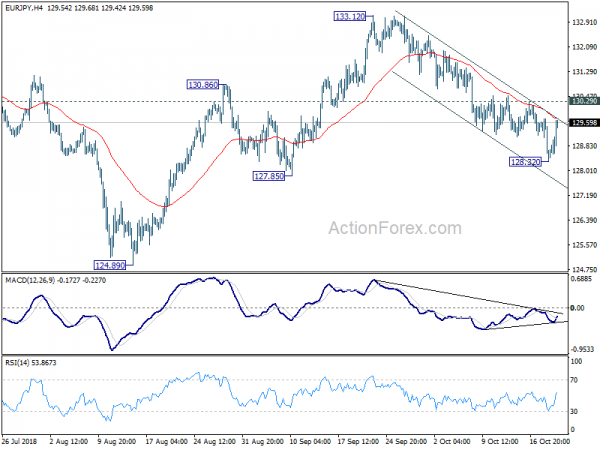 In the bigger picture, current development suggests that EUR/JPY could have defended key support level of 124.08 key resistance turned support. And, the larger up trend from 109.03 (2016 low) is still in progress. Firm break of 137.49 structural resistance will target 141.04/149.76 resistance zone next. This will be the preferred case as long as 127.85 near term support holds. However, break of 127.85 will turn focus back to 124.08 key support level. 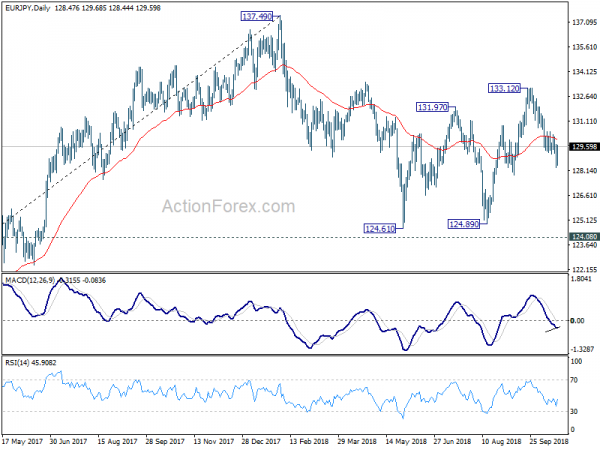 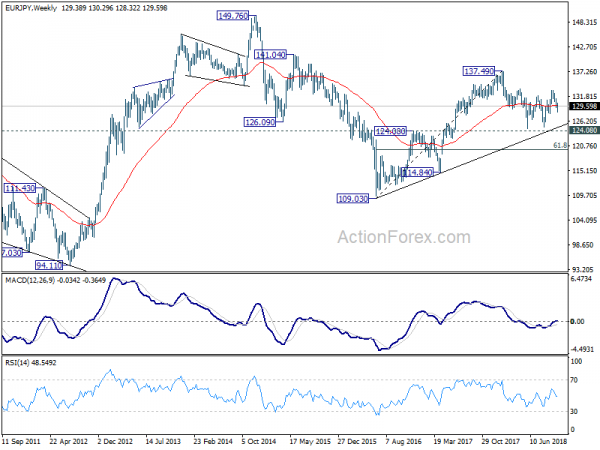 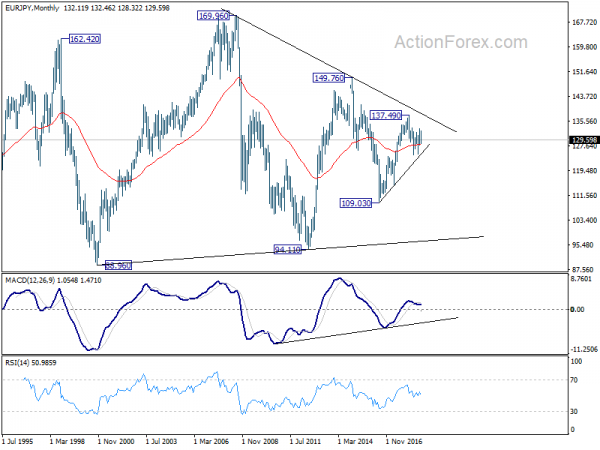