Sentiments Turned Sour on Slowdown Worries, But No Panic Button Hit Yet

Looking through all the financial market news last week, the message was rather unified. That is, 2019 will be a year of slowdown, globally. Economic data, central banks, governments and independent organizations are all reinforcing this message. While ECB’s “pre-emptive” dovish turn triggered wild market reactions, it was just the nail for the case. The question now is whether the markets are pessimistic enough on the outlook.

Judging from the technical developments, we see that there are conditions in place for bearish reversals in stocks in US, Germany and Japan. But none of these indices confirmed reversal. Instead, late buying on Friday showed much underlying resilience. We believed the panic buttons weren’t hit yet. A lot will depend on upcoming developments in US-China trade negotiations and Brexit.

In the currency markets, Yen emerged as the biggest winner on risk aversion, and more so from reversal in global treasury yields. US 10-year yield hit as high as 2.759 on March 1 but closed just 2.625 last week, lowest since early January. German 10-year hit hit as high as 0.21, also on March 1, but closed the week at 0.071. New Zealand Dollar was the second strongest, US Dollar the third. On the other hand, Sterling was the weakest ones as crucial Brexit votes approach. Euro followed as second weakest on ECB.

Let’s have quick recap on some important happenings last week. OECD lowered global growth forecast by -0.2% to 3.3% in 2019 and by -0.1% to 3.4% in 2020. In the Interim Economic Outlook, it’s noted that Chinese and European slowdown, and weakening global trade growth are the principal factors weighing on the world economy. For China, while policy stimulus should offset weak trade development, “risks remains of a sharper slowdown” that would hit global growth and trade.

China lowered 2019 GDP growth target to 6-6.5%. The lower bound at 6% would be the slowest pace of growth in nearly three decades. China plans to cut around CNY 2T in taxes and fees for companies, in particular manufacturers. Budget deficit is expected to climb 0.2% to 2.8% of GDP. Shockingly poor February trade data reinforced that China is facing “tough struggle” and serious impact from trade war. February alone, exports contracted -20.7% yoy, decline since February 2016. Imports also dropped -5.2% yoy.

European slowdown is another drag to global economy as noted by OECD. ECB’s statement, press conference and policy actions showed policy makers are in deep worry. Firstly, ECB changed the forward guidance and now expects to keep interest rates at present levels “at least through the end of 2019”, prolonged from “summer of 2019”. TLTRO-III is announced, quarterly from September 2019 through March 2021. It’s aiming at preserving favourable bank lending conditions, and smooth transition of monetary policy.

In the post meeting press conference, ECB President Mario Draghi said weakening in data points to a “sizeable moderation” in growth extends into 2019. Impact from slowdown in external demand and country/sector specific factors is “turning out to be somewhat longer-lasting”. GDP growth was “revised down substantially in 2019 and slightly in 2020”. GDP is projected to grow by 1.1% in 2019, 1.6% in 2020 and 1.5% in 2021. They compare to December’s projection of 1.7% in 2019, 1.7% in 2020 and 1.5% in 2021. Risks surrounding outlook are “still tilted to the downside”, due to “geopolitical factors, the threat of protectionism and vulnerabilities in emerging markets.”

Talking about central banks, after leaving interest rate unchanged at 1.75%, BoC acknowledged that, as “recent data” suggested, global economic slowdown has been “more pronounced and widespread” than previously anticipated. The most surprisingly change comes from the monetary policy stance. BOC judged that the current economic developments “warrant a policy interest rate that is below its neutral range”. Moreover, “given the mixed picture that the data present, it will take time to gauge the persistence of below-potential growth and the implications for the inflation outlook”. In short, BoC has take a rate hike off the table, at least for now.

Talking about rate cuts, traders are not back betting on a cut by Fed by the end of the year. Fed futures now imply around 20% chance of that happening. It was practically at 0% chance a week ago and more than 20% chance a month ago. But judging on the fact that the chance just rose little on Friday, non-farm payrolls report didn’t have too much impact yet. After all, the 20k job growth in February was undoubtedly poor. But a month of data could distorted by many factors like weather. We may have some upward revision in the data next month. Also, unemployment rate dropped back to 3.8% while average hourly earnings accelerated to 0.4% mom. It’s overall not too bad a set of data.

No additional progress is reported regarding US-China trade talks. Instead, there are rumors that the March 27 Trump-Xi summit in Mar-a-Lago is called off. There are some speculations. Some noted the agreement is better signed in a third country. Some said Xi is concerned Trump will walk away from a deal in Florida, just like what he did to Kim in Vietnam. But most likely reason is the two sides are still far away on some core issues. The ne got at ions could drag on to April.

Meanwhile, we’d like to point out that the phrase “trade truce” is an incorrect description of the current state (admittedly, we used it too). According to Cambridge Dictionary, truce means “a short interruption in a war or argument, or an agreement to stop fighting or arguing for a period of time”. If US and China are engaged in a trade war, the cannons are the tariffs. Such tariffs are still “flying”, every single day. They just stopped escalating, but the war is still on.

If the punitive and retaliatory tariffs since last year damaged global trade growth and economy, they’re still doing it. Hence, the longer the talks, the longer the impacts would be. IP theft, forced technology transfer and unfair trade practices are also happening everyday in China before a deal is made and enforced. Besides, it should be reminded that the steel and aluminum tariffs are still on, and there is no end in sight. It will remain a drag in EU’s economy, as well as others.

The crucial votes on Brexit from March 12 to 14 are approaching but there is no clear breakthrough. As a somewhat last ditch effort, EU chief negotiator Michel Barnier reveal, through his tweets, new package of “concessions” to the UK. Firstly, the arbitration panel can give UK the risk to a “proportionate suspension of its obligation under the backstop, as a last resort, if EU breaches its best endeavours/good faith obligations to negotiate alternative solutions.”

More controversially, Barnier said “EU commits to give UK the option to exit the Single Customs Territory unilaterally, while the other elements of the backstop must be maintained to avoid a hard border. UK will not be forced into customs union against its will.” That means, the UK can choose to apply the backstop just to Northern Ireland, rather than the whole of UK. This idea was rejected by the UK long ago.

The idea drew heavy criticism from the UK government. Cabinet Minister Andrea Leadsom rejected the idea and said she was “absolutely astonished”. She also warned that “if the EU doesn’t enable us to resolve this issue issue about the permanent nature of the backstop, then in effect what the EU is pushing us towards is leaving the EU without a withdrawal agreement at all”. Chairman of the ruling Conservative Party Brandon Lewis also said “we are not going to have an agreement that compromises the unity of the United Kingdom.”

Without any fundamental change regarding Irish backstop, there is practically no chance for May to get her Brexit deal through the Parliament on March 12, next Tuesday. A vote on no-deal Brexit will then be held on March 13 to see if there is explicit consent on this path. If not, there will be another vote on Article 50 extension on March 14.

As for Sterling’s reactions, it should be noted that its recent rally was built on fading chance of no-deal Brexit. There was no positive development on the deal to push the Pound higher. Last week’s decline just put Sterling back to where it was.

Risk sentiments turned sour, but no panic yet

In the currency markets, USD/JPY, despite the sharp fall from 112.13, is holding well above 110.35 support, as well as near term channel support. 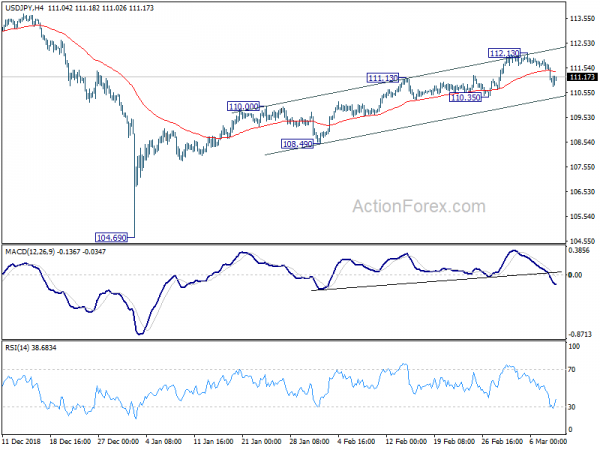 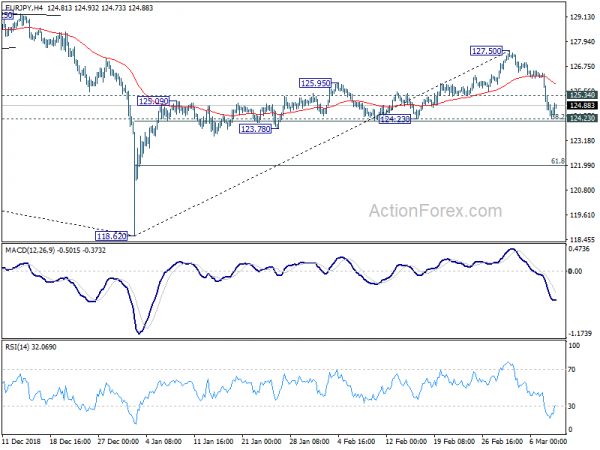 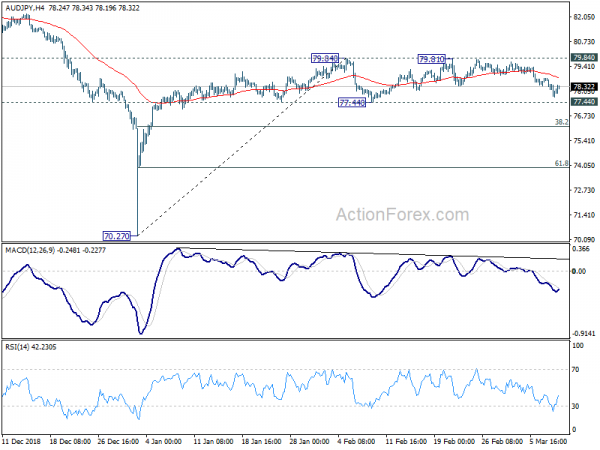 CAD/JPY is still holding above 82.26 support. 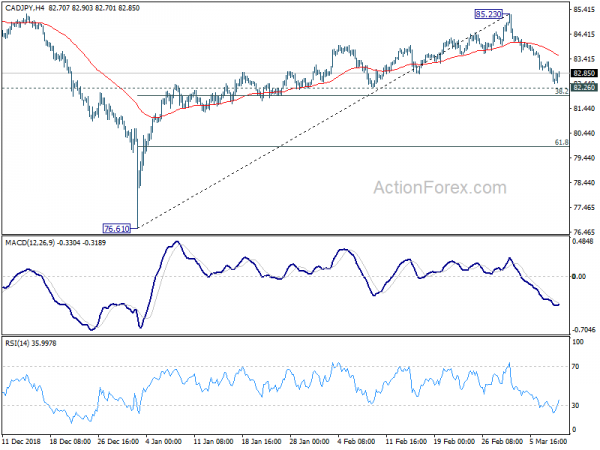 There is so far no confirmation on bullish reversal in the Japanese Yen. More evidence might come this week as the above levels are broken. But for now, the declines in Yen crosses are generally viewed as corrective first.

We’ve switch from AUD/JPY short to AUD/USD short last week, then there it went the turn in market sentiments and sharp decline in global treasury yield. We’re admittedly trapped by prior week’s rally in yields as we’ve given up the expectation for Yen to rebound. Though, the bearish view on Aussie still holds. So, we’d stay short in AUD/USD, entered at 0.7050. Stop will be held at 0.7120. 0.6722 low is the first target. But we’re actually looking at long term down trend resumption to 0.6008 and below. 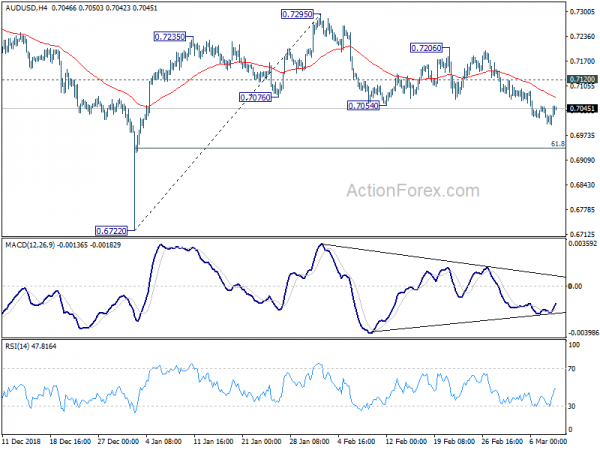 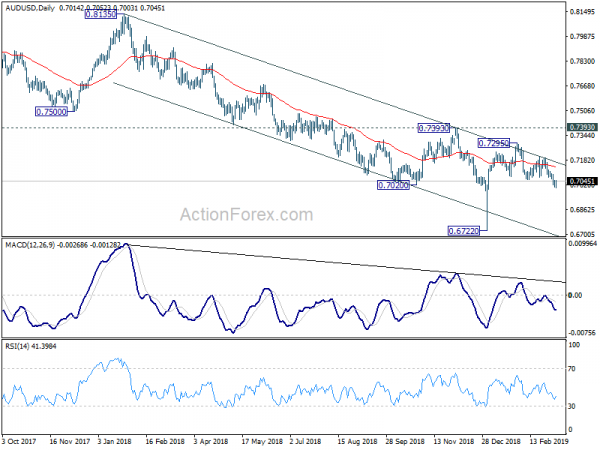 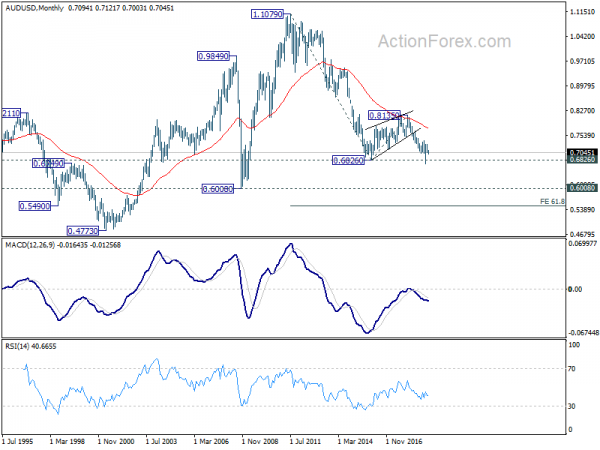 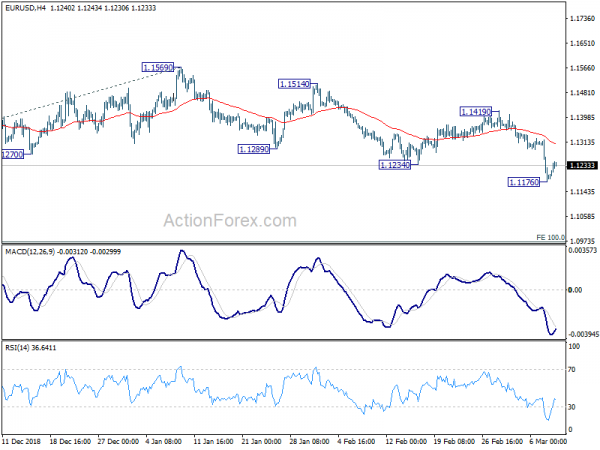 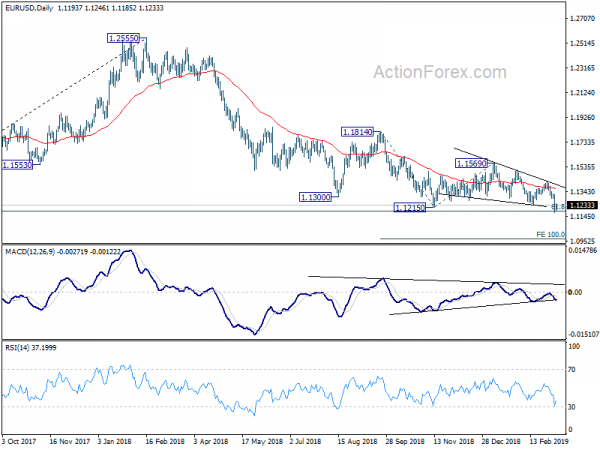 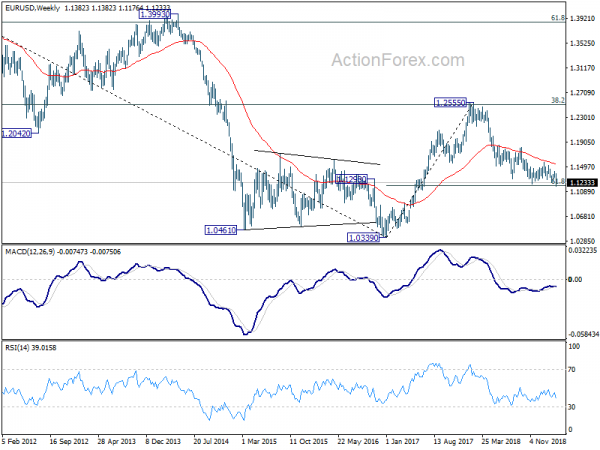 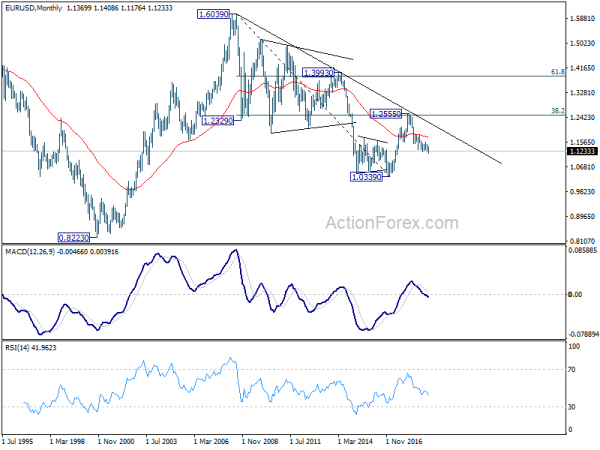