Sterling was the star winner last week as boosted by renewed hope of a Brexit deal between the government and opposition. Poor results for both Conservatives and Labours are piling pressure on both parties to end the Brexit standoff and drama as soon as possible. In short, Conservatives lost more than 1300 seats. But despite the results, Labour didn’t gain anything, but instead lost around 80 seats. That’s seen as a wake up call to the two major parties on how deeply the public is dissatisfied by them.

Prime Minister Theresa May stepped up calls on Labour leader Jeremy Corbyn to agree on a cross-party deal to leave the EU. May said in a Sunday newspaper party: “To the Leader of the Opposition I say this: Let’s listen to what the voters said in the local elections and put our differences aside for a moment. Let’s do a deal”. May is expected to offer new concessions to Labour as talks with restart on coming Tuesday. It’s perceived that both sides are getting closer and closer and a deal could be done within days.

New economic projections as presented in the quarterly Inflation Report was somewhat Sterling neutral. BoE voted unanimously to leave the Bank rate unchanged at 0.75% and the asset purchase program at GBP 435B . Besides see the economy to expand +0.5% in 1Q19, up from +0.2% in 4Q18, the staff has upgraded GDP growth in 2019 through 2020. The unemployment rate is expected to fall further from the current multi-decade low level. Meanwhile, inflation forecasts were revised lower.

Euro lifted as better than expected Q1 and resurgence of inflation

Euro followed as second strongest as economic data showed that Q1’s slowdown was not as bad as originally expected. Meanwhile, there were signs of pickup in inflation in Eurozone. Most importantly, Eurozone GDP grew 0.4% qoq in Q1, up from Q4’s 0.2% and beat expectation of 0.3% qoq. France GDP growth was steady at 0.3% qoq. Italy GDP turned back to 0.2% qoq growth. Spain GDP grew 0.7% qoq, up from 0.6% qoq.

It’s too early to confirm that the worst is over for Eurozone. But at least, things are getting better. The next batch of May PMIs will be crucial in solidifying a positive outlook.

EUR/GBP could finally have downside breakout 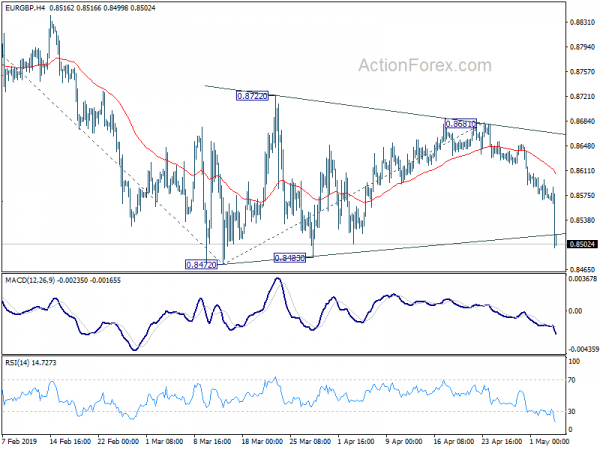 Dollar ended the week as the third weakest ones even though Fed Chair Jerome Powell talked down the chance of rate cut in the post FOMC meeting press conference. Weak inflation and, more important, wage growth, dragged down the greenback.

The FOMC rate decision itself was rather listless. Policymakers decided unanimously to keep the target range for the fed funds rate unchanged at 2.25-2.50%. Meanwhile, the IOER was lowered to 2.35% from 2.4%. The slight change in the accompanying statement showed a more upbeat assessment on the economic developments, despite softening inflation.

Powell elaborated at the press conference, the members “suspect that some transitory factors may be at work” regarding the recent slowdown in inflation. As such, the baseline view remains that, “with a strong job market and continued growth, inflation will return to 2% over time and then be roughly symmetric around our longer-term objective”. Meanwhile, Powell suggested that risks to global economic outlook “have moderated somewhat”. Most importantly, Powell noted that “our policy stance is appropriate at the moment” and emphasized “we don’t see a strong case for moving it in either direction.”

Markets’ bet on rate cut receded after the comments. As of end of Friday, fed funds futures are pricing in on 47% chance of a cut by December meeting, comparing with 75% chance a week ago. 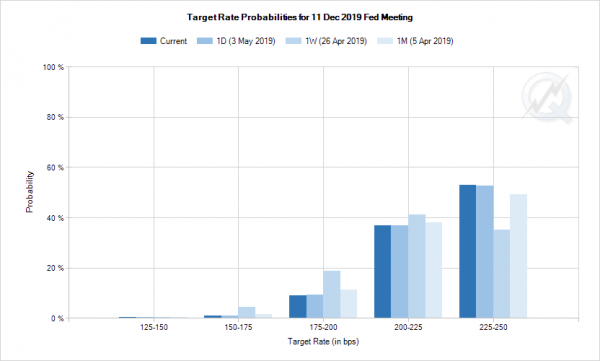 Employment data were also strong too. Non-farm payroll employment grew strongly by 263k in April, well above expectation of 185k. Unemployment dropped to 3.6%, lowest level since December 1969. But that was more due to drop in participation rate by -0.2% to 62.8%. Wage growth however, disappointed as average hourly earnings rose 0.2% mom, below expectation of 0.3% mom. 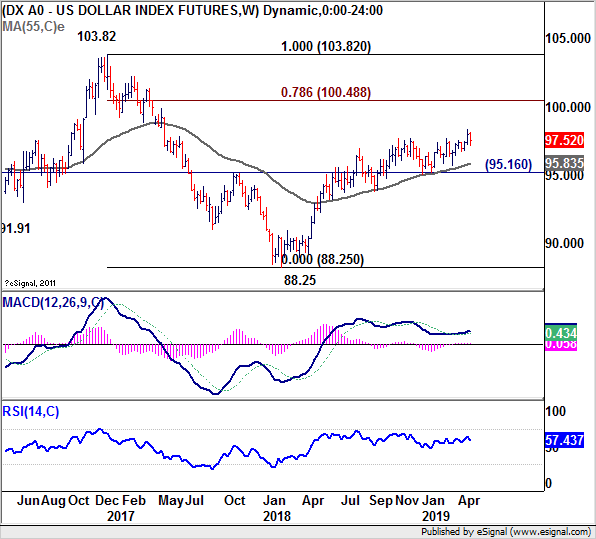 10-year yield was also rather in decisive. TNX drew support from 2.463 last week and rebounded. But then, it failed to break through falling 55 day EMA again on another attempt. Near term outlook is mixed for now. On the downside, firm break of 2.463 should add much credence to case that fall from 3.248 is resuming through 2.356 low. However, considering, bullish convergence condition in daily MACD, firm break of 2.614 resistance will be a strong indication of bullish trend reversal. It may takes a while for the picture to clear itself. 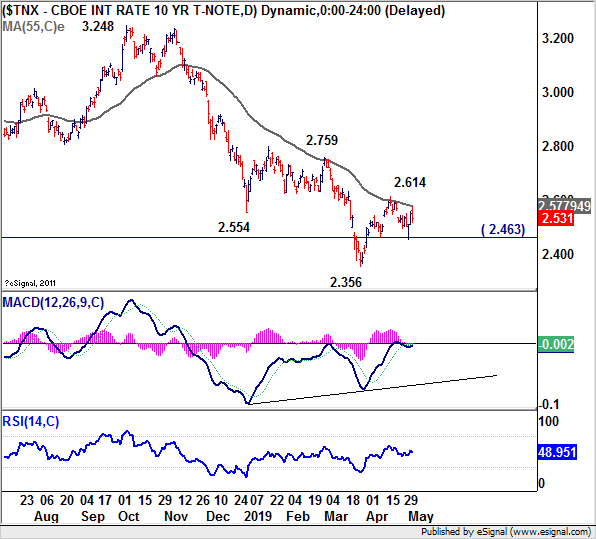 RBNZ to cut this week, would RBA do too?

Australian and New Zealand Dollar were the two weakest currencies last week. Both were pressured by expectations of rate cut by respective central banks. RBNZ has turned dovish for some time, and Q1 inflation and employment data added further support for a cut in May. Must weaker than expected Australian CPI also added to the case of an RBA cut. Additionally, weaker than expected China PMIs also raised doubt that the seasonal recovery in March was just false dawn.

Both central banks will meet this week. RBNZ is almost sure to cut. RBA will come first opinions are divided on whether it will act now, or wait till August meeting. We believe it all depends on the new economic projections to be previewed on Tuesday with the statement, with details on Friday. If RBA does forecast sharp deterioration in inflation, there should be enough reason for a pre-emptive cut. Otherwise, it could just turn a bit dovish to pave the way for a move later in the year. 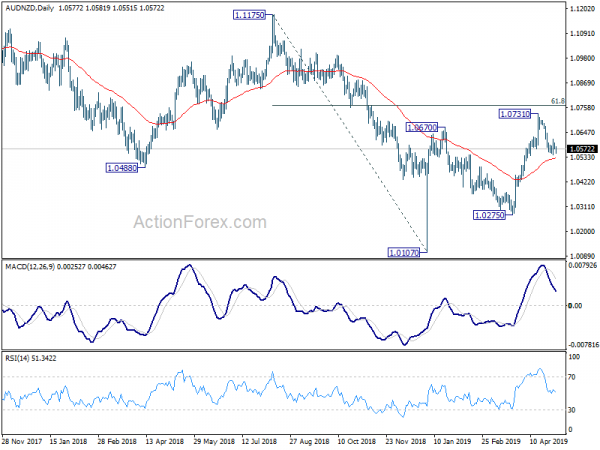 GBP/USD’s strong rally last week suggests that corrective decline from 1.3381 has completed at 1.2865 already. Also, 1.2774 key support level was defended. Rise from 1.2391 is likely in progress. Intraday bias is now on the upside this week for retesting 1.3381 high. On the downside, below 1.2987 minor support will turn bias back to the downside for 1.2865 support instead. 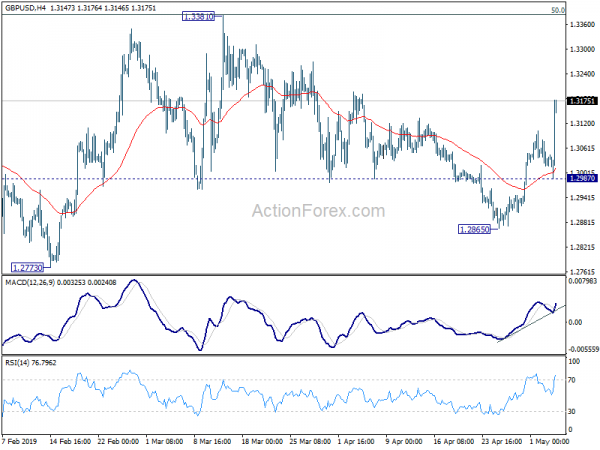 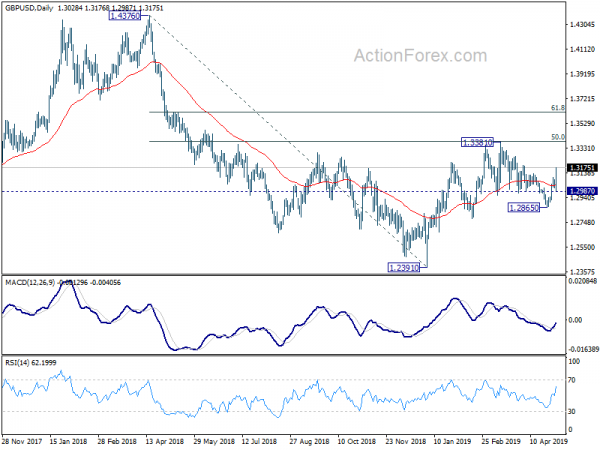 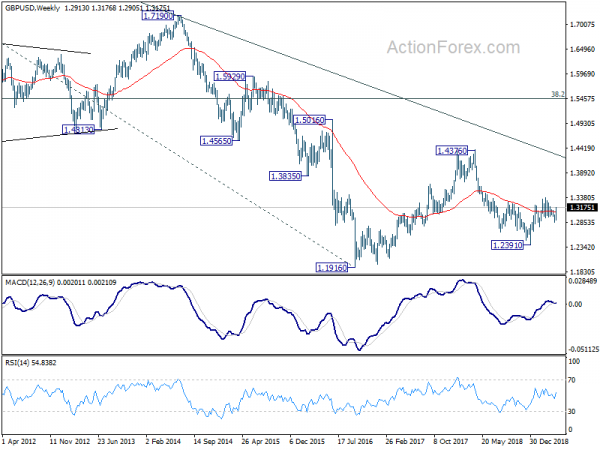 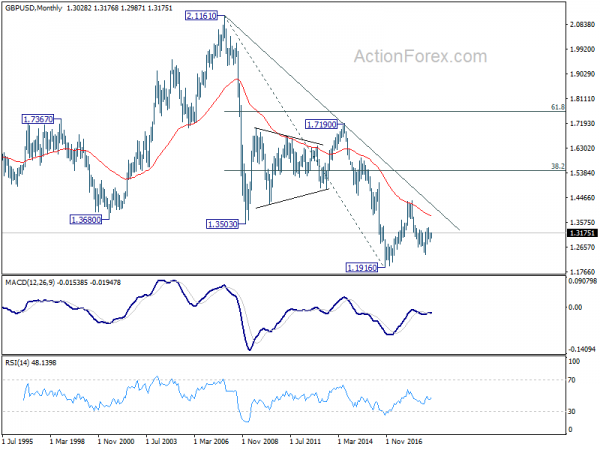