Concerns over inflation, slower economic growth and normalization of monetary stimulus have hurt market sentiment, pressuring commodity currencies over the past week. Among G10 commodity currencies, Australian dollar performed the worst as it was additionally hammered by a dovish RBA and the selloff of iron ore price. 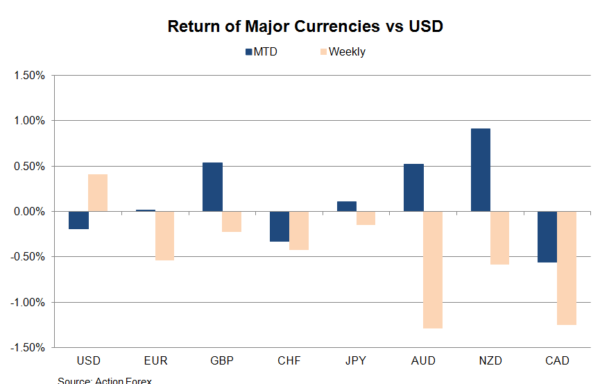 The RBA adopted dovish tapering in September. While going ahead with asset purchases of AUD 4B/ week (down from AUD 5B/ week previously), policymakers noted that they would continue “until at least mid February 2022”, compared with the previous guidance of November 2021. They also cautioned that the delta variant would “material decline” in 3Q21 GDP and slower subsequent growth rebound. The stance compared with the ECB (also held meeting last week) which upgraded both growth and inflation forecasts. The members also for the first time acknowledged inflation pressures could be more persistent than previously anticipated. In mid-August, the RBNZ, while leaving all monetary policy tools unchanged, reiterated that the“least regrets policy stance” is to “further reduce the level of monetary stimulus”. As the market awaits the FOMC meeting next week, the consensus is that the tapering process would begin later this year. RBA’s cautious tone has helped weaken its currency as its counterparts are turning less dovish.

The selloff of iron ore price is another key reason pressuring Aussie. The iron ore price has tumbled almost -40% from July’s peak. Back in May, China, the major of Australia’s iron ore, threatened to “punish” Australia by increasing iron ore imports from Brazil. Over the past month, China has reportedly planned to curb crude steel production so as to reduce emissions. This is prone to restrict its demand for iron ore. If the country really sticks to the target of limiting steel production to 2020 level, it would mean a nearly -12% decline in output from August to December. 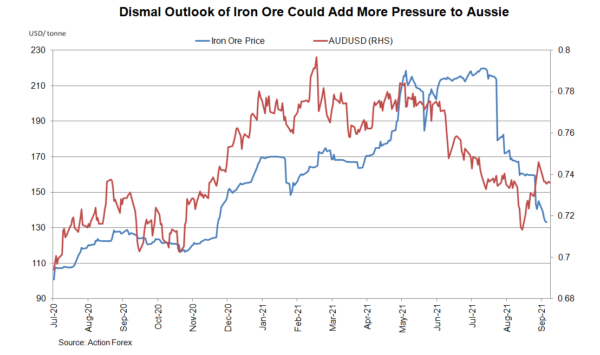 The latest report revealed that China’s iron ore imports increased +10.2% to 97.49M tones in August. This marks the first month-over-month rise since March. Yet, the volume remained -2.86% less than the same period last year. In the first 8 months of the year, iron ore imports were down -1.7% y/y to 746M tonnes. The outlook of China’s iron ore demand remains dismal. Besides China’s retaliatory act and environmental concerns, a slowing Chinese growth outlook has weighed on the real estate sector. This also reduces demand for steel, hence its major component, iron ore. Aussie could continue to tread water if iron ore price remains under pressure.