The RBNZ will be the lone major central bank to decide on rates next week, but that doesn’t mean the schedule is light, as there’s an abundance of key economic data ripe for release. German growth figures will reveal if the euro area’s traditional star player entered a technical recession, while in America, a testimony by Fed chief Jay Powell could provide clues around the recent ‘pause’ in rate cuts. Beyond regular economics, markets will keep a watchful eye on trade news amid the ongoing euphoria for a partial deal, as well as on UK election polls.

Did Germany slip into a technical recession?

Europe’s biggest economy will be under the microscope on Thursday, when preliminary GDP data for Q3 will hit the markets. Having contracted in Q2, another negative number now would constitute a technical recession, reigniting worries about the euro area’s future. Considering how weak the German PMIs were throughout the quarter, such an outcome – unfortunately – seems quite likely.

If that’s the case, it may be a very unpleasant week for the euro, as the ‘doom and gloom’ of recent years returns to haunt it. That could raise the odds that the European Central Bank (ECB) rolls out even more monetary stimulus under the leadership of Christine Lagarde, something that markets currently don’t consider very likely judging by the pricing of future rate cuts. 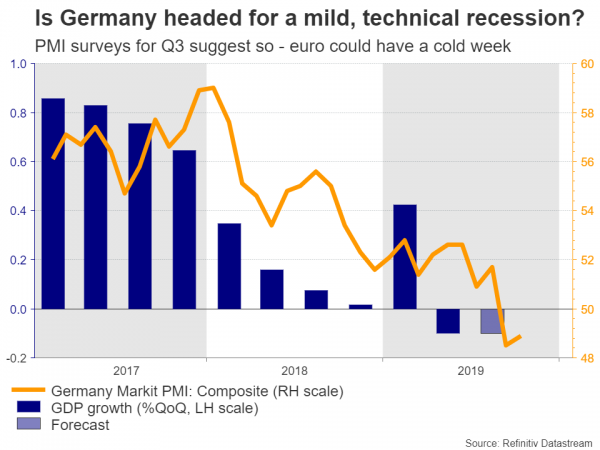 In the big picture though, a mild downturn in Germany could (paradoxically) be exactly what the euro area needs right now. European monetary policy is already exhausted, so more ECB stimulus – like bigger QE injections – would probably be ineffective in lifting the economy. Rather, fiscal stimulus is desperately needed, but the only country with any real fiscal space is Germany, and Berlin has been painfully clear that it will open the spending taps only after a crisis hits. Therefore, a shallow German recession may be the catalyst that finally pushes governments into action, preventing an even worse slump.

Meanwhile, Germany’s ZEW survey for November will be released on Tuesday, while the second estimate of Q3 GDP for the entire euro area is due on Thursday. In politics, elections in Spain over the weekend could make headlines, but are unlikely to impact markets much.

The Reserve Bank of New Zealand (RBNZ) will announce its decision early on Wednesday, and markets seem somewhat split over whether policymakers are going to cut rates. The implied probability for a cut is now 65%, rising from roughly 50% a few days ago.

Yet, it may be a much closer call than the current pricing implies. Recent developments have been encouraging, on the margin. Inflation was stronger than the RBNZ had projected in Q3, as was the labor market, while the US-China ceasefire painted a brighter picture for exports. 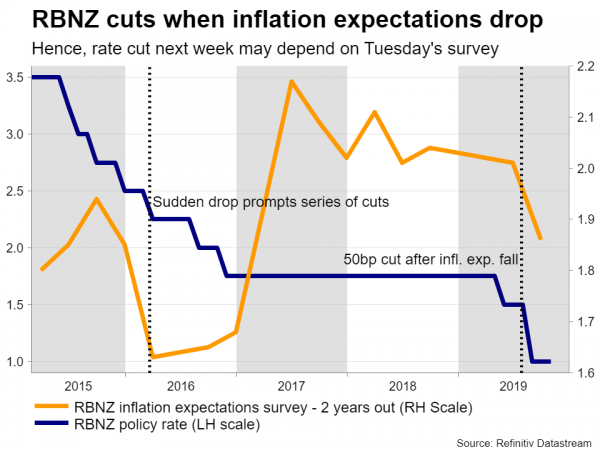 As things stand, the situation doesn’t look dire enough for the RBNZ to pull the trigger, though there is something that could change that. The central bank will release its quarterly survey of inflation expectations on Tuesday, and the results will likely determine if rates are cut. A sudden fall in expectations triggered the easing cycle back in 2016 and the ‘double’ rate cut earlier this summer, so this may be the most important variable for policymakers. If expectations hold roughly steady, the RBNZ could hold its fire and the kiwi could surge – otherwise, rates are likely to be cut and the currency could drop.

A final note. A rate cut being priced in with a 65% chance means that the downside reaction in the kiwi if rates are indeed reduced is likely to be smaller than the corresponding upside move if rates are not slashed.

In the United States, the calendar is relatively thin until Wednesday, when Fed Chairman Jay Powell testifies before the Joint Economic Committee of Congress. Investors will tune in for any signals on monetary policy, as Powell is likely to be questioned on the recent rate cuts and the subsequent ‘pause’ his central bank announced.

Alas, it’s questionable whether we’ll hear anything new. The Fed made it clear that having cut rates three times already, it now wants to step back and let that stimulus work before it considers acting again. Indeed, the main factor that will determine if rates are slashed again is the trade war, and since Powell has no control over that, he is unlikely to provide any real insights. 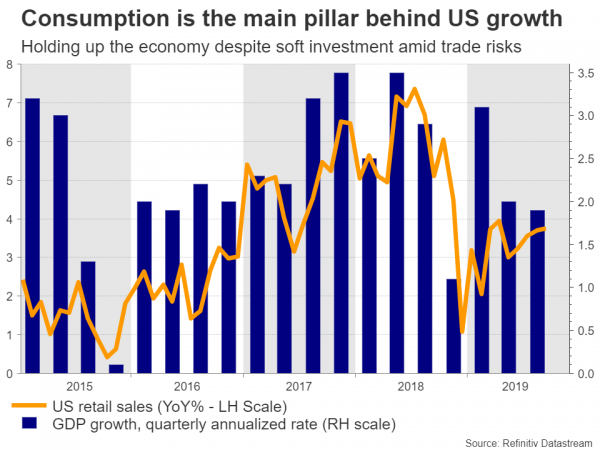 Rather, the CPI inflation data on Wednesday and the retail sales on Friday – both for October – could be more important for the dollar, especially the latter. Consumption has been the main pillar holding up the American economy lately, so a confirmation that it remains healthy could see the odds for near-term Fed cuts perish further, consequently lifting the greenback.

British data flurry unlikely to distract the pound from election

In the UK, there’s a barrage of data coming up. GDP numbers for Q3 are released on Monday, the latest jobs stats are due on Tuesday, before inflation and retail sales figures for October hit the markets on Wednesday and Thursday respectively.

As usual, however, the pound will probably react only to politics – not economics. All eyes remain on the election campaign, and the biggest driver for sterling now may be what opinion polls signal. Broadly speaking, the pound would likely cheer any signs that either of the major parties can get a clear majority, as that would imply either Johnson’s deal getting passed or a second referendum down the road. In contrast, any indications that smaller parties are gaining ground would raise the odds for a hung parliament and hence for more deadlock, weighing on sterling.

In the world’s second-biggest economy, retail sales, industrial production, and fixed asset investment numbers for October are due on Thursday. Yet, both the yuan and market sentiment are likely to react more to any trade developments. On that front, reports suggest that Washington has agreed to roll back some of its tariffs, to get the ‘phase one’ deal over the finish line. 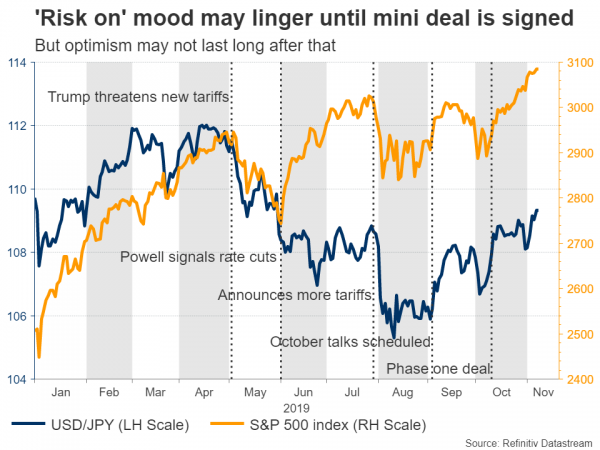 An official confirmation of that could bring further relief to the markets, helping to propel assets such as stocks and commodity currencies like the aussie higher, while hurting safe havens – most notably the yen.

However, looking further out, any real progress after the ‘phase one’ deal seems dubious. Phase two is where the thorny issues will be discussed, and China has been clear it won’t compromise on those, setting the stage for more tensions – perhaps early next year. The point is that after the ‘hype’ of the phase one deal quiets down, optimism about further progress could quickly evaporate.

The Australian currency staged a spectacular recovery lately, with an improving trade outlook and the RBA signaling that it’s done with rate cuts for a while fueling the rally. Markets now assign a mere 15% chance for another cut in December, and that could fall towards zero if the upcoming wage price index for Q3 (Wednesday) and employment data for October (Thursday) come in strong.

In the land of the rising sun, third-quarter GDP stats will see the light on Thursday, with forecasts pointing to a slowdown in growth as soft external demand hurt exports. The silver lining is that domestic demand likely stayed solid, but that may change in Q4, as the sales tax was raised in October. The last time Japan raised this tax back in 2014, a recession followed, so the BoJ will likely wait for Q4 results before it draws any conclusions on the economy. 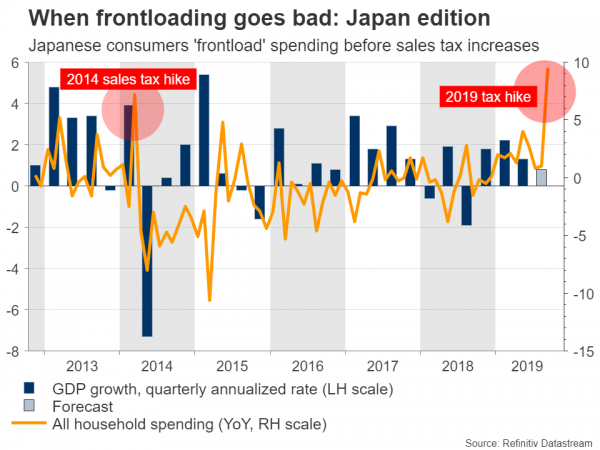 As for the yen, the near-term outlook looks bleak amid the ongoing trade euphoria. That said, this optimism doesn’t seem durable, and assuming that tensions flare up again early next year on a lack of meaningful progress, the currency could stage a strong comeback.

Fed Kaplan: Economy to have substantial contraction in Q2, unemployment to jump to mid-teens