Just as central banks thought it was safe to begin closing the taps on stimulus, warning signals are flashing red across the markets as fears grow of a sharp slowdown in growth in the major economies. However, policymakers are expected to stay on the tightening path for now, with the September jobs report likely giving the Fed the green light to taper in November, while the Reserve Bank of New Zealand will probably press on with a telegraphed rate hike. In the meantime, with oil prices at three-year highs, OPEC+ will be under pressure to pump more oil at its monthly meeting.

RBNZ to raise rates but downside risks for kiwi

New Zealand’s economy may have made a quick bounce back but uncertainty about the outlook has increased since the country was plunged back into lockdown in August due to a local outbreak of the Delta variant. The RBNZ held off from raising rates at its August meeting following the lockdown announcement, but policymakers made it clear that tightening is still on the agenda.

However, although the latest shutdowns were not initially thought to cause a too severe a dent in economic output, a full reopening may be weeks if not months away, increasing the prospect of a steep GDP contraction. Covid cases have spiked again in recent days, highlighting the difficulty of containing the Delta spread even with New Zealand’s zero-Covid strategy. 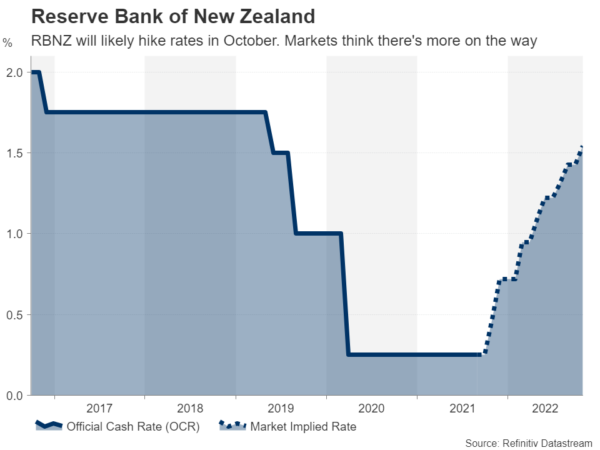 Subsequently, bullish expectations of a 50-basis points (bps) rate hike at Wednesday’s gathering have diminished and the RBNZ will probably lift the official cash rate by a smaller increment of 25bps to 0.50%. However, unless policymakers were to strongly flag more aggressive rate hikes in the future, there may not be much of a boost to the New Zealand dollar, especially now that US yields are also on the up.

Mounting worries for the RBA

Across the Tasman Sea, the Australian dollar is likely to see less action than the kiwi as the Reserve Bank of Australia is expected to keep rates on hold when it meets on Tuesday. Daily virus cases remain near record highs in Australia but with vaccination rates rising, the government is pressuring state authorities to ease some of the restrictions. But lockdowns are not the only major risk the Australian economy is facing right now. A deepening slowdown in China – Australia’s biggest trading partner – is another cloud hanging over the economy.

There’s a good chance therefore the RBA will sound somewhat less optimistic about a speedy recovery so investors will be on the lookout for a more cautious tone in the statement. However, with the next full policy review not anticipated before February, any tweaks in the language would probably be minor but could nevertheless exacerbate any fresh selloff in the aussie, which has been struggling for weeks. 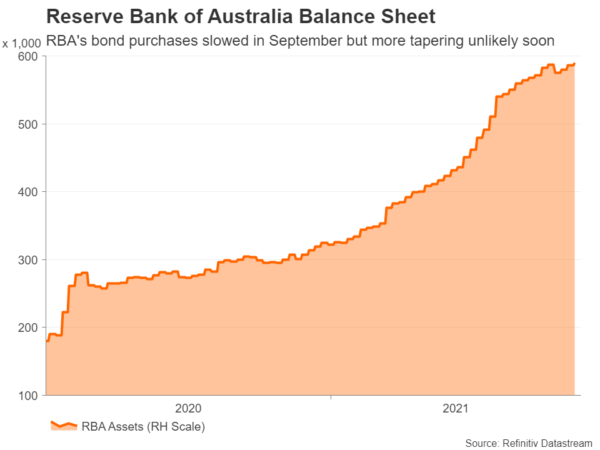 Will September NFP be “reasonably good”?

The Federal Reserve has finally gotten the taper ball rolling, signalling that a November announcement is on the cards. The decision is conditional, though, on another solid jobs print, or to put it more vaguely, “a reasonably good employment report” as per how Chair Powell would like to see.

Friday’s jobs numbers may deliver just that. Nonfarm payrolls are projected to have increased by 500k in September, more than double the August figure, which came in at 235k. The unemployment rate is forecast to dip by 0.1 percentage point to 5.1%, while the month-on-month growth in average hourly earnings is projected to ease from 0.6% to 0.4%. 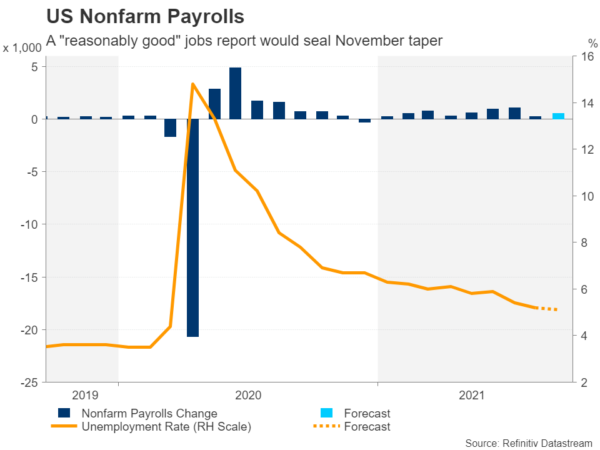 The end to federal unemployment benefits at the beginning of September is expected to have encouraged more Americans to seek employment. However, with the Delta strain still rampant in many states, not all who lost their benefits may have returned to work out of fear of catching the virus.

But would a slightly disappointing jobs report derail the Fed’s plans? That’s not very likely given that high inflation is fast becoming a bigger problem than what most policymakers had anticipated. Hence, unless the NFP reading is shockingly bad, the Fed is almost certain to go ahead with tapering at its next meeting.

In other data out of the United States, the ISM non-manufacturing PMI due Tuesday will also be watched for any possible signs that the US economy lost more steam in September.

Stronger-than-forecast jobs or PMI numbers next week are bound to push up the US dollar, which has been bolstered on the back of the Fed taper bets and safe haven demand. However, any surprise softness in the data may only spur a mild pullback if it’s not accompanied by a sharp rebound in risk appetite.

The Canadian dollar has been on a steady downtrend since June even as oil prices have scaled fresh highs during this period. The winding down of bond purchases by the Bank of Canada has also been unable to offset the negative forces emanating from the gradual deterioration in general risk appetite as well as the resurgent US dollar. 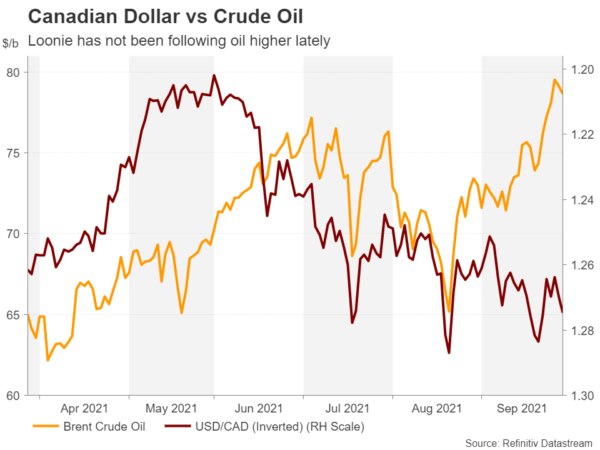 The loonie is in danger of coming under renewed attack next week if OPEC and its allies decide to raise oil output by more than the planned 400,000 barrels a day when they meet on Monday, although such a move is unlikely. The rally in energy markets has taken the price of Brent crude to three-year highs. The OPEC+ alliance is under pressure to ease the soaring cost of fuel and some producers might be inclined to give in to those demands.

However, it’s hard to see the likes of Saudi Arabia agreeing to a faster rollback of the production cuts in spite of the recent gains in oil futures. OPEC+ intends to phase out its pandemic-era supply curbs by September 2022 but may not yet see the market as being tight enough to warrant a change in the current policy. In the absence of any hints of a quicker phaseout, oil prices could extend their rally, lifting oil-linked currencies such as the loonie.

There could be additional support for the loonie on Friday as the September employment report is expected to point to a further recovery in Canada’s labour market. However, given the heightened anxieties surrounding the global growth outlook, any boost would likely be modest.

It will be somewhat of a quiet week in the euro area and the United Kingdom, with the main release being the final IHS Markit services PMIs on Tuesday. Eurozone retail sales on Wednesday and German industrial output on Thursday might attract some attention for the euro as well. Both currencies have slumped against the greenback lately as, apart from the Fed’s hawkish tilt, there are worries that the worsening energy crisis will weigh on growth, particularly in the UK, which is also facing significant supply disruptions due to a shortage of truck drivers. 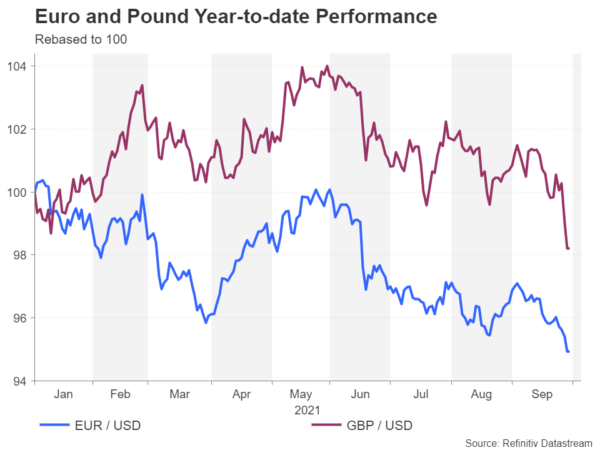 Those concerns are not likely to go away anytime soon so the slide in the euro and pound could continue in the coming days.