Euro surges broadly today as boosted a series of better than expected economic data. GDP beat market expectations and argue that the slowdown wasn’t as worse as expected. In particular, strength was also seen in problematic countries like Italy and Spain. Unemployment rate dropped to lowest in more than a decade. Inflation could also be coming back as German CPI accelerated much more than expected.

Nevertheless, Euro was just the second strongest, following Sterling. The Pound could been lifted by “talks” that Prime Minister Theresa May is targeting to conclude Brexit negotiation with Labour by mid next week. Australian Dollar remains weakest ones for today as weighed down by China PMI misses. Sustainability of post lunar new year seasonal rebound in Chinese economy is in serious doubt. Canadian Dollar is also among the weakest on surprised GDP contraction in February.

Technically, GBP/USD’s break of 1.3019 minor resistance now argues that corrective decline from 1.3381 has completed. That in turns argue that rise from 1.2391 is not finished yet. Retest of 1.3019 could be seen soon. GBP/JPY’s rebound also suggests that it has defended 143.72 support, and thus retain near term bullishness.

Eurozone unemployment dropped to 7.7%, lowest since 2008

German CPI accelerated to 2% in April, well above expectation

Several British media, including BBC and Guardian, reported today that Prime Minister Theresa May is now targeting to reach a Brexit compromise with opposition Labour Party by the middle of next week. May’s spokesman had declined to set an end date for the talks, and described the latest round of talks as “serious and constructive”.

Separately, Labour Party is meeting today to hammer out its position on whether to demand a second referendum on any Brexit deal as part of its campaign for the European parliament election next month.

Swiss KOF dropped to 96.2, largely due to deterioration in manufacturing

Swiss KOF Economic Barometer dropped to 96.2 in April, down from 97.1 and missed expectation of 97.0. KOF noted that the Barometer value is still “clearly below average”. Also, the Swiss economy will remain sluggish in the coming months.

KOF also said that the decline was largely due to deterioration in manufacturing sector. Construction also dropped slightly. The signals for private consumption as well as the banking and insurance sector was almost unchanged. The outlook for other service providers, accommodation and food service activities and for foreign demand was slightly better than in the previous month.

Canada GDP unexpected dropped -0.1% mom in February, worse than expectation of 0.0% mom. Looking at some details, mining, quarrying and oil and gas extraction sector declines (-1.6%) for the sixth consecutive month. All subsectors decline. Transportation and warehousing contract as rail transportation drops -1.6%, largest fall since June 2011. That’s largely due to a 10.8% drop in rail transportation. Finance and insurance sector declined -0.6%., Manufacturing sector contracted -0.4%. Though, utilities were up 1.5% due to record-setting cold weather in Western Canada. Construction grew for the second month by 0.2%. Also from Canada, IPPI rose 1.3% mom, RMPI rose 2.8% mom in March.

US Treasury Secretary Steven Mnuchin said he hopes to make “substantial progress” on trade negotiations as he arrived in Beijing with Trade Representative Lighthizer today. Mnuchin said “we’ve a meeting here, and then the vice premier and team will be coming back to Washington D.C., and we hope to make substantial progress in these two meetings.” He added: “I’m not going to comment on specific issues of the discussions… They’ve been quite broad as I’ve said before. We’ve made a lot of progress. We look forward to the meetings here.”

China’s Foreign Ministry said “in recent months, both countries’ economic and trade teams have held many rounds of high-level consultations and achieved much positive progress.” China hopes that both sides can “work hard, exclude disturbances, and reach a mutually beneficial, win-win agreement”.

Caixin PMI manufacturing dropped to 50.2 in April, down from 50.8 and missed expectation of 50.2. Zhengsheng Zhong, Director of Macroeconomic Analysis at CEBM Group said: “In general, China’s economy showed good resilience in April, yet it stabilized on a weak foundation and is not coming to an upward turning point. The Politburo meeting signalled that in the first quarter of this year China had adjusted its countercyclical policy marginally. As pressure on the economy remains in the second quarter, we expect that there will be minor adjustments to the policy but not a turnaround.”

New Zealand ANZ Business Confidence dropped slightly from -38.0 to -37.5 in April. Agriculture has the least confidence at -62.9 while manufacturing at -25.8 was already the best. Activity Outlook improved from 6.3 to 7.1. Agriculture outlook was the best at 20.0 while retail was worst at -7.5.

ANZ noted that the economy is “experiencing a soft patch that is proving reasonably long-lasting”. Steadily declining GDP is expected to continue to middle of this year. However, , easier monetary conditions and policy certainty should see momentum recover, assuming the global outlook continues to improve.

Also, “cost pressures are expected to dissipate as capacity pressures wane, reducing the pressure on firms’ profitability.” ANZ expects RBNZ to cut the OCR, starting in August, to support growth in inflation. 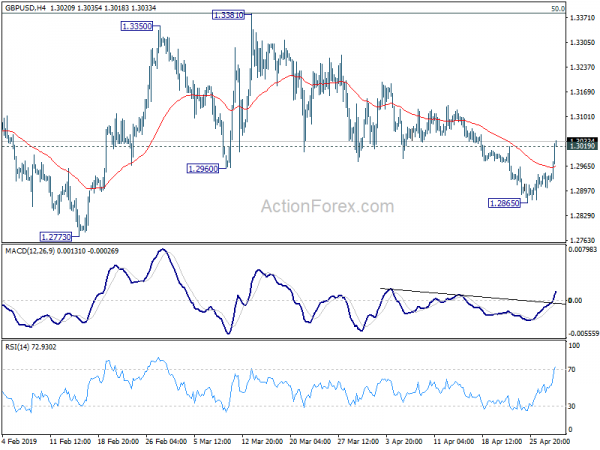 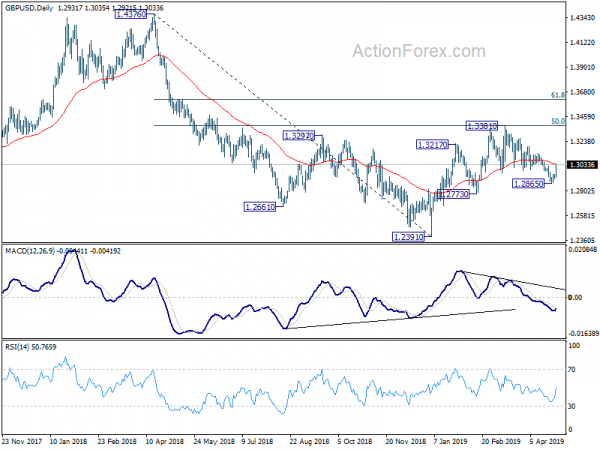