Dollar opened the week mildly lower but appears to have found some footing in early European session. Trump is fighting trade wars on two fronts, at least. On the one hand, China has cleared stated its position for not backing down on some core issues, with a white paper released on Sunday. So, there is little chance for a breakthrough in US-China trade negotiation for the near term. And it’s even doubtful on whether Trump and Xi will meet at the G20 summit in Japan later in the month.

On the other hand, Mexican officials will be in Washington this week. Comments so far suggested that Mexico is open to work with the US on measures to curb immigration flow through the country to US. However, the main problem is that Trump will only drop the tariffs threats if Mexico could meet his demands, which are so far quite arbitrary. And, as Trump tweeted, “Mexico is sending a big delegation to talk about the Border. Problem is, they’ve been “talking” for 25 years. We want action, not talk.” So it’s unsure how Mexico’s good faith would be responded to.

In the currency markets, at the time of writing, Yen is the weakest one for today, followed by Sterling. Swiss Franc is the strongest one, followed by Australian Dollar. Much volatility is envisaged ahead with heavy weight data from US, RBA and ECB, as well as import data from UK, Eurozone, Canada and Australia.

China reiterated known pre-conditions for resuming trade talks with US

China’s highly anticipated white paper, released on Sunday, on trade relationship with US was quite anti-climatic. The overall paper, and the press conference were basically old wine in old bottles. But the message was clear that China is preparing itself for prolonged trade war with US.

In short, China blamed the US for starting trade conflicts. And, it criticized the US for going back on what’s agreed three times. And it hold US totally responsible for the collapse of trade negotiation.

China also reiterated pre-conditions on resuming trade negotiations. First, both sides have to respect “each other’s social system, economic system, development path and rights”. Secondly the negotiations has to be based on integrity. Thirdly, China will not step back on its principles, including sovereignty.

The implications are quite clear that China will not do anything to change its own development path along socialist market economy (or some would call that state capitalism). That is, China will not retreat from subsidizing State-Owned Enterprises. Secondly, the implementation of the agreement should be under full control of the sovereign entity. That is, for example, China will decide what new laws to pass to curb IP theft, or it will fulfil the commitment with administrative measures. China will object to US instructions on what are to be done exactly.

China Caixin manufacturing PMI was unchanged at 50.2 in May, above expectation of 50.0. Production was broadly stable in May. Total new work and export sales both increase slightly. And, there was renewed rise in purchasing activity.

Zhengsheng Zhong, Director of Macroeconomic Analysis at CEBM Group said:”Overall, China’s economy showed steady growth and resilience in May. The manufacturing sector saw demand rise from both overseas and domestic markets, and prices were stable. However, business confidence weakened, and manufacturers’ inventory levels remained low. The trade tensions between the U.S. and China are having an impact on confidence and the best way to respond to this is to boost the confidence of enterprises, residents and capital markets by carrying out favorable reforms and to undertake timely adjustments to regulations and controls.”

Mexico’s Economy Minister Graciela Marquez is going to meet US Commerce Secretary Wilbur Ross in Washington on Monday to discuss Trump’s tariff threats. Foreign Minister Marcelo Ebrard will also be in Washington on Wednesday for the issue.

Mexican President Andres Manuel Lopez Obrador expected “good results” from the meetings. And he said on Saturday that “the main thing is to inform about what we’re already doing on the migration issue, and if it’s necessary to reinforce these measures without violating human rights, we could be prepared to reach that deal.”

Lopez Obrador also insisted that Mexico would not pursue trade war with the US. And, “we’re doing all we can to reach a deal through dialogue… we’re not going to get into a trade war, a war of tariffs and of taxes.”

Italian Prime Minister Giuseppe Conte is said to issue an ultimatum to the government today for speeding up government actions on budget, or face his resignation. He would insist that he has no intention of being subjected to any European Union disciplinary procedure over public debt.

Over the weekend, Economy Minister Giovanni Tria blamed the economic downturn for rising debt. However, he also emphasized “Italy does not want to clash with the European Commission, and I hope the opposite is also true, that is to say that no one in Brussels intends to engage in a fight with us.” He reiterated the pledge to keep budget deficit below government forecast of 2.4% of GDP. And he added “our position is reasonable and I think we will eventually reach a compromise with the Commission.”

European Commissioner for Economic and Financial Affairs Pierre Moscovici said on Sunday that he’d still prefer dialogue with to sanctions on Italy regarding it’s budget. And, “for the past five years I have not punished anyone.” However, he emphasized “If they do not respect the rules at all, it will be necessary for the European Commission and the European states to take their responsibilities”. The Commission will make proposals this week on resolving the dispute with Italy over its budget deficit.

Japan PMI manufacturing was finalized at 49.8 in May, revised up from 49.6, down from 50.2 in April. Markit noted that domestic and external demand conditions deteriorate. Firms slow the rate of hiring amid production cutbacks. And, output expectations turn negative for first time since November 2012.

Joe Hayes, Economist at IHS Markit: “There were no signs a let-up in the recent manufacturing downturn during May, as output and new orders both slipped for fifth successive months. Weak demand from Japan’s key trade partner, China, as well as signs of an increasingly sluggish domestic economy, have impacted sales volumes…. Given the importance of capital goods to Japan’s foreign trade, it would suggest further difficulties lie ahead for Japanese exporters.

“With the upcoming sales tax hike and upper house elections in July, there lies ahead potential banana skins for Japanese firms to avoid. Re-escalated trade tensions between China and the US merely add to existing concerns for manufacturers. Subsequently, businesses cast a downbeat assessment for the year ahead for the first time in six-and-a-half years.”

In particular, on wages, 55.5 is the lowest monthly results since March 2017 and is well below historical average of 59.2. This index has been trending lower since its recent peak in September 2018. It indicates that fewer manufacturing businesses are now implementing wage rises, compared to the recent peak in Q3 of 2018.

Important week ahead for Aussie and Dollar

This is a rather important week for both Australia and US. RBA is widely expected to cut interest rate on Tuesday, after Governor Philip Lowe hinted on that in May. Markets are generally expecting more rate cuts this week, ranging from a total of two to three. So, the question for the RBA meeting is whether Lowe would drop further indications for more easing. Also, Australia will release retail sales, GDP and trade balance.

For the US, markets have been adding bets on a Fed cut this year. Fed fund futures are pricing 78% of a cut by September meeting. Inflation is sluggish without a doubt, as with core PCE at 1.6% yoy in April. The question is whether growth and employment outlook would deteriorate to an extent that prompt Fed for, at least, an insurance cut. In particular, PMI manufacturing and services dropped notably in May, and that could be reflected in ISM indices too. And of course, non-farm payroll report will be closely watched too. 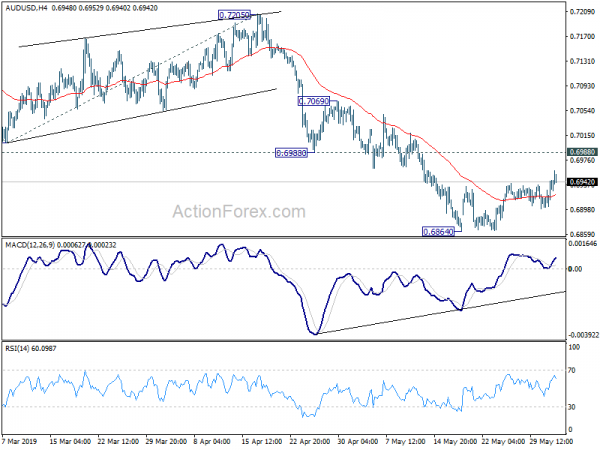 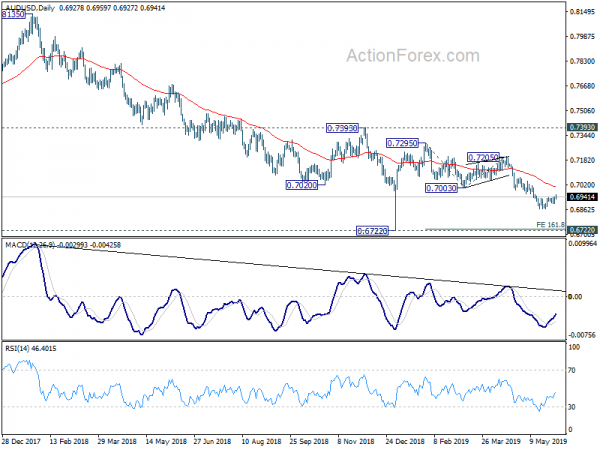